When news broke of Carrie Fisher’s death, fans around the world were immediately heartbroken. It wasn’t just the death of Princess Leia who passed away, not just an actress who made it big off of one role. Carrie was a warrior, someone who courageously fought her inner battles in the public eye in hopes of helping someone else who might be going through the same thing. She spoke of bravery and living with confidence even if you didn’t feel it to your core. She lived in a way that showed her scars as proof that she had overcome, and that is just one of the beautiful things about her.

The stigma surrounding mental illness has unfortunately existed for years and shows no signs of slowing down. Speaking about mental illness feels impossible and when someone finds the courage to ask for help or to be open about their struggle; they’re frequently subjected to judgment and accusations from people who have never dealt with a similar battle, or worse, people who have. Carrie dealt with that head on and in doing so, became a beacon of hope for people who were struggling silently. 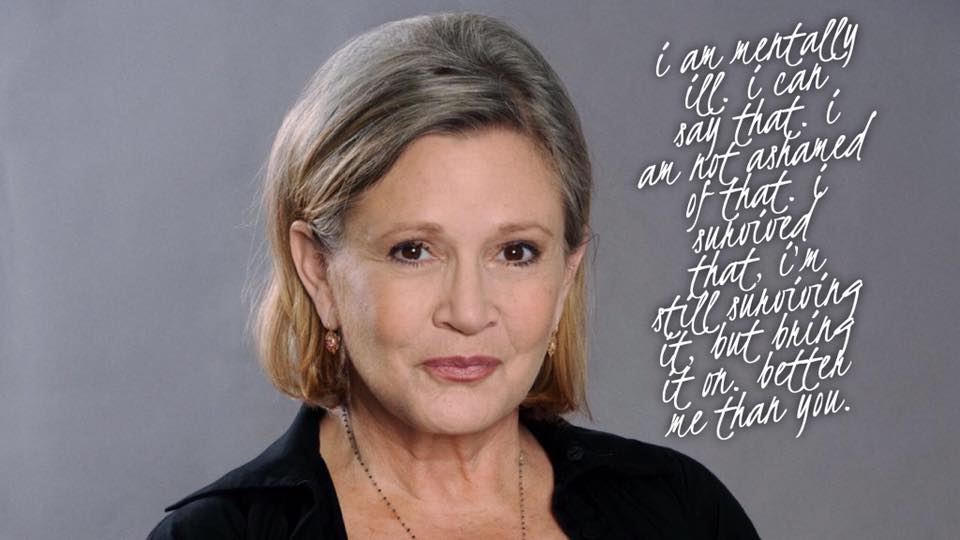 As stated by NYTimes, Ana Marie Cox was one of the first to tweet about her own mental illness as a show of homage to Carrie. Ana Marie suffers from bipolar disorder as well and unashamedly opened herself up to prove that what Carrie did in her life mattered.

The amount of people who followed suit went well beyond the hundreds of thousands. There were people opening up about depression, bipolar disorder, anxiety, eating disorders, personality disorders, schizophrenia, and PTSD to name a few. Many of these people were coming out about their mental illnesses for the first time and doing so in the most soul-baring way possible.

The internet, social media specifically, is a tool that connects people all over the world. It’s also something where people are critically judged for 140 character Tweets which show only a small fraction of who they truly are. There are judgments passed on people suffering from a number of ailments, and it takes a lot of courage to be open about something so personal; it takes a lot of strength.

We need a hashtag. #InHonorOfCarrie I've been in treatment for depression since my 20s.

#InHonorOfCarrie: I was diagnosed with major depressive disorder several years ago. Some days are tough. I try to deal with humor.

I suffer from depression, anxiety & OCD. I'm not ashamed & I wish more people understood these afflictions.#InHonorOfCarrie

For @carrieffisher: I have depression and anxiety. She worked hard to make it easier for patients like me. #InHonorOfCarrie #HackTheStigma

Some of the tweets came from loved ones of people who are suffering from mental illnesses, specifically one where a father thanked Carrie for helping him understand his daughter’s mental illness.

There were also tweets where family members spoke about the loss of loved ones due to mental illness.

The Tweets didn’t stop, in fact, there are still posts now where people are getting real and being honest about their struggles and they’re thanking Carrie for living so openly with her demons.

Carrie fought alcohol and drug addiction, mental illness, and awful rumors and accusations from people who knew not of her personal struggles and judged her by her actions alone. She didn’t ask for pity, didn’t beg for understanding; instead – she stood up in knowing who she was, she continued to live her life for herself and her loved ones, and she did so with grace and glitter.

Anna Kendrick said once she tossed Glitter at her and made her shine during a taping of SNL.

Carrie Fisher wore glitter in her hair. When I said I liked it, she ran her fingers through it and lobbed a handful at me. #TheGreatest 💔 pic.twitter.com/T7NWGdJp8w

With the memory and graciousness of Carrie, the world will forever be a better place and perhaps in the wake of her untimely death, we’ll find ourselves challenged to be more kind, more understanding, and to show more love. Life is too short not to.