With the series finale of Bates Motel less than a week away, we sat down with stars Nestor Carbonell and Freddie Highmore to chat about their favorite moments from the show, if the series wrapped up the way they expected, and their most memorable fan moments from Freddie’s first convention, Walker Stalker London 2017.

Emma: How is the convention treating you guys? What’s been the most interesting moment of the weekend for you all?

Freddie Highmore: It’s been great, and it was nice doing the panel together as well. It’s a chance to interact just in general with people in a way that I have never done before, given tat this is the first convention, and there’s a sort of overwhelming crowd of people in the entire place, but whenever you meet someone, sort of face to face, it feels very personal and intimate. It’s nice mixture of that.

Nestor Carbonell: Yeah. I agree. I think for me the panel is always fun. You get really interesting questions and these are arguably the most loyal fans of the show, and they’re so insightful and bright and connected. Obviously we’re so invested in our characters, so it’s really nice to be able to talk to them in that way and then you’re right, meeting them face to face and sort of getting more in depth into the shows and characters and what they’d like, that kind of thing. It’s always fun.

Emma: How do you feel the evolution of fandom has changed since you guys started the series, and especially from your time with Lost, Nestor? Does it affect your work?

Nestor Carbonell: Well I mean it’s, suffice it to say, without the fandom of these shows, these shows just wouldn’t exist you know? Especially shows like Bates and Lost that were sort of out of the box of the main stream kind of shows.

There’s so much programming, so you really have to speak to a specific audience and very devout viewership to remain on the air. So it’s thanks to them, we owe all of this to them. You know, that we get to do these interesting stories and so, but the fandom is phenomenal. These particular shows, Lost and Bates, are so character driven. I think that’s largely the appeal for people is that they’re hooked into somehow the character. They identify with a certain character and I then for me that’s what the draw has been. You know, being involved in both.

Freddie Highmore: I guess it’s interesting the way that fans have become so much more a part of shows these days than ever before. I guess primarily through social media, although that’s not something I’m on in any way. So I guess, for me, this convention is in some ways a replacement of the chance to really meet people and connect with people. And I think ultimately that is the most rewarding way of interacting with people too. It’s face to face as opposed to over social media. It’s also just interesting to get other people’s opinions on the show, everyone working within it has their own vision of what they were trying to create or what you’re sort of imagining what people will see, and it’s interesting when perhaps the what we assume to be the most interesting thing or the most nuanced thing is different depending on the fan. It’s nice how everyone has different experiences that enhance your own sort of … They enhance the way or change the way that you view the show.

Nestor Carbonell: Yeah, specifically I know when the fans are telling you that you’re the villain and I’m not-

Freddie Highmore: Well no. I mean I don’t think … it’s probably an even split.

Nestor Carbonell: In Norman’s mind and perhaps in Freddie’s too.

Nestor Carbonell: Oh I’m sure they do. I’m sure in Norman’s head they all love him, and he’s a saint.

Freddie Highmore: But there were a couple of people who thought he was genuinely evil. I genuinely struggle to see how that’s possible.

Nestor Carbonell: It’s very true. We were walking away for our photo op, and Freddie turns and just, “I’m really amazed that how many people think I’m evil.” You kill people mercilessly under the guise of you know, not knowing them and now you know and,” he’s truly his own best advocate. His character’s own best advocate.

Freddie Highmore: I feel like, you know, but most people when they see me, that Romero is the one that messed everything up.

Nestor Carbonell: Yeah I’m sure. I’m sure they do.

Freddie Highmore: At least I try to impress that opinion upon them. It’s not actually the thing that someone says to me, in terms of the two of us is at the end of Season 4, that they were really sad when I brought out the ring and you ended up punching me because they just wanted … they just wanted the two of us to have like, a real connection.

Freddie Highmore: Yeah. Which is probably optimistic, but it would have been a lovely ending.

Emma: Well speaking about that, coming into the finale. Were you surprised at all where your characters ended up? Or did you kind of see it coming?

Nestor Carbonell: It kept changing. From what I gathered. The ultimate vision didn’t change, but some of the moving parts in between.

Freddie Highmore: And how certain things happened and how they-

Nestor Carbonell: How they evolved, yeah. Through the course of the season, so yeah I was surprised ultimately how it came together but I think it … You know, you saw it. It was great, fitting for the ending the way it gets us together.

Freddie Highmore: I think it’s great, and what I think is so interesting is all about Season 5 is the way in which Psycho the movie now gets to interact with Bates Motel and these sort of two mythologies colliding and the way in which Bates Motel won’t seek, necessarily to exactly mirror everything that was in the movie, but it’s more paying enough homage to it, and being very respectful of it and everything kind of being inspired by it, but not taking the direct approach. 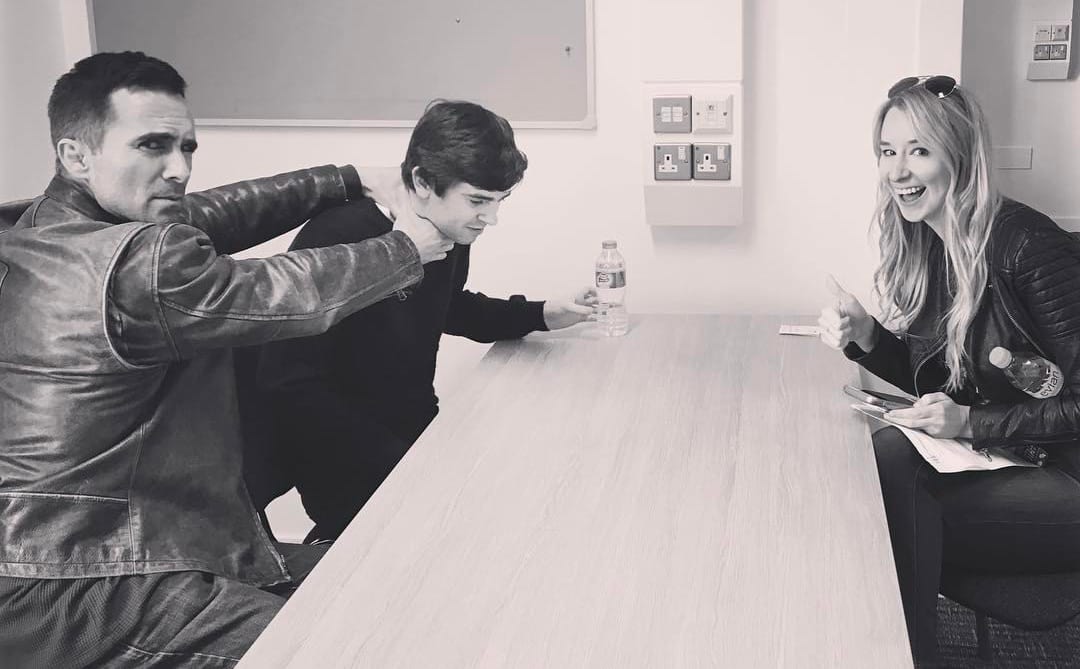 Emma: What do you guys feel is the most disturbing scene that you’ve filmed on the series?

Freddie Highmore: When Romero and Norma get close for the first time.

Nestor Carbonell: That was, there is nothing disturbing about that. You know, I don’t know if it was disturbing but it was awkward. It was having to explain to … When I directed the episode last year, when I had to direct my own love making scene.

Emma: How did that work?

Nestor Carbonell: It was interesting. Before I tried it I had to sort of, pitch it to the networks, the studio, Carlton and Kerry and about 40 other department heads and Carlton wanted me to be very specific and I was, and it was very funny. So, but those things are always awkward, but it helps that we’re … I don’t know if that makes sense, that we’re family?

Freddie Highmore: I guess the oddest thing was actually just me and Vera being opposite each other in exactly the same clothes – Following each other around and switching in and out between takes, but that was good fun.

Nestor Carbonell: That was cool.

Emma: What was the most challenging part over the years of laying thee characters? Something that you really learned from and you feel like you’re going to take forward with you in your careers?

Nestor Carbonell: A lot of the crew sacrificed other work to be available, because we would shoot a five month window. So they needed to be available and some shows would overlap and films would overlap, and they really chose to stick with the show. They were fans of the show as much as we were, and I think specifically in terms of the character what was challenging or was a good learning experience, for me was just enjoying the every element of the ride, knowing kind of where the character was going to go emotionally. So playing him, I made a choice of never smiling. Knowing full well that I was going to be paired up with Norma and having her be the reason to smile. So not playing obviously the end from the beginning and sort of working my way up. I don’t think my face moved much the first half of the series. So a lot of it is sort of this guy hardened character and just sort of keeping that until slowly the walls kept coming down. That was a fun challenge.

Freddie Highmore: I guess they’ve been different year after year, the challenges. It’s been interesting this year now that it sort of feels like the re-imagining a little bit of the show. Given that Norma now “Mother,” as we tend to call her these days, is within Norman’s head. So it’s been sort of like a restarting of their relationship in some way. The person that Vera has been playing is fundamentally very different now.

But she’s excellent. I mean it’s been … I guess that’s been a bigger thing for her than for anyone else. That she’s managed to really reinvent that character in a whole new way this year.

The Bates Motel series finale airs Monday night, April 24! Will you be watching? What’s been your favorite part of the series? Take a look at the final trailer below!