As a new week begins, it’s time to jump on to week 9’s challenges for Fortnite Battle Pass players. Just like in the previous weeks, players are given a certain set of tasks to complete by Epic Games in order to earn those Battle Stars and rank their tiers up. One of the challenges that players have to complete is the “Follow the Treasure Map Found in Haunted Hills” challenge, and we’re give you some tips on how to do that in the most efficient way possible. After all, this is Battle Royal and wasting time could ruin your chances of being number one!
Week 9’s treasure map challenge will take players to the indicated spot at Junk Junction, which will place you on the North-West part, tucked away in a corner. See image below: 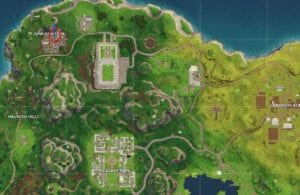 The 10 Battle Star Reward is on top of a mound of “junk” in the top-center area shown above. It’s that easy. You just need to walk up with it to interact, and then move on to the rest of the challenges:
Deal damage with Explosive Weapons to opponents (500)
Search Chests in Moisty Mire (7)
Use a Shopping Cart (1)
Visit the center of Named Locations in a Single Match (4)
Follow the treasure map found in Haunted Hills (1) (HARD)
Shotgun Eliminations (4) (HARD)
Eliminate opponents in Anarchy Acres (3)

This is what you need to get the Battle Pass membership if you haven’t checked it out yet.
100 tiers, 100 rewards.

The more you play, the more you unlock. you can do it on your own schedule and level up fast! These weekly Challenges give you the flexibility to make progress whenever you can play and are available for 950 V-Bucks.
Also, there is the Battle Bundle which includes access to the Battle Pass and instantly unlocks your next 25 tiers, all at a 40% discount.

Want it all faster? You can buy up to 100 tiers, each for 150 V-Bucks!
Launch Fortnite
Select Battle Royale
Navigate to the Battle Pass Tab
Purchase either the Battle Pass or the Battle Bundle
The latest update is now live on Xbox One, PlayStation 4, PC, Nintendo Switch, and iOS devices.