In a new trailer released by A&E, we are given a first look at Rihanna playing Marion Crane, the iconic character from the original 1960 film Psycho. In the film, Crane is portrayed by Janet Leigh and Norman Bates by Anthony Perkins. 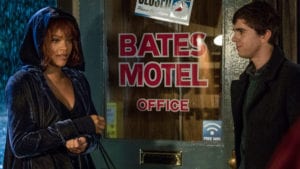 Bates Motel is entering its 5th and final season and in those 5 years we have come to see Norman, played by Freddie Highmore, slowly unravel. When we last left him, He had just murdered his mother, Norma. The upcoming season fast forwards two years later. Outwardly, he is a normal member of the community while inwardly and at home, he continues to struggle with his mind and “Mother”, played by Vera Farmiga as she attempts to take control.

Dylan and Emma are pulled back into Norman’s crazy world once again as Alex Romero, when has been incarcerated, tries to seek ways of avenging his true love’s death.

For a full view, please click on each image as you view them.

Here’s your first look at what’s to come.

The fifth and final season of Bates Motel premieres February 20, 10 pm on A&E.