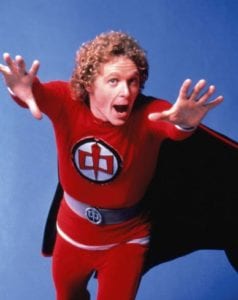 ‘The Greatest American Hero‘ is heading to ABC for a reboot with a female-led. Of course, the series is inspired by the 1980’s TV show about Ralph Hinkley (William Katt) a school teacher turned superhero when he put on a snazzy red and black super suit. Of course, he was not really a natural born superhero, but he won our hearts all the same.

In the reboot, we meet Meera, a 30-year-old Indian-American woman who has spent her life in search of tequila, karaoke and trying to find her purpose. However, a chance meeting has changed her fate and the fate of the world when she is given a super suit that will help her save the world but only if she doesn’t destroy it first.

ABC ordered the pilot reboot from ‘Fresh Off the Boat‘ Executive Producer Nahnatchka Khan. There is a major team assembled to write and produce along with Khan such as Rachna Fruchbom, Fierce Baby, Mandy Summers and Tawnia McKiernan.

According to Entertainment Weekly, FOX had been in talks for development for a ‘Greatest American Hero’ reboot in 2014 but nothing ever came of it.

NBC Just Ordered a Pilot For Their Own Version of ‘Lost’