Mercedes Mason, who plays Ofelia Salazar on Fear the Walking Dead, is a huge fan of The Walking Dead. She follows the show closely, has viewing parties and, just like all of us fans, is desperately waiting to find out who met the business end of Negan’s bat, Lucille.

Recently, Mason appeared on The Chew, where they asked her what she thought of the season 6 finale. Calling the season finale “The Sopranos ending of this generation,” Mason said there are basically three choices for Negan’s victim.

First contender would be Daryl however, she quickly skipped over this possibility and proclaimed that she would join in the rioting (obviously) if that were to happen. Then, she said, it would be between two others; Abraham and Glenn, and hinted at a theory that she has as to why it couldn’t be Glenn. She said, if Glenn got the bat, Maggie wouldn’t be able to contain herself.  She would get hysterical, thus leading to more trouble for the group and, she doesn’t think that’s going to happen so, it couldn’t be Glenn (click here to see the full clip from The Chew).

So, does this mean she thinks Abraham is victim? 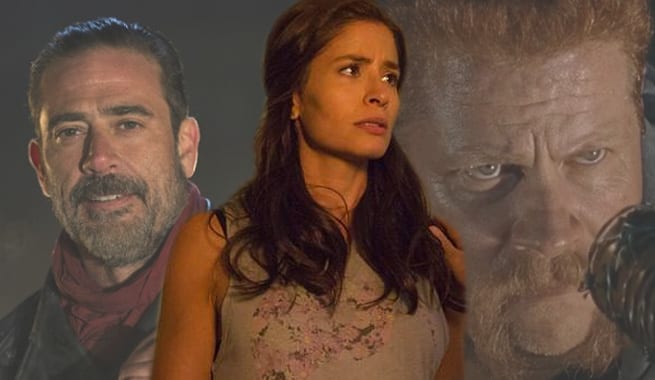 In a recent interview with ComicBook.com, Mason confirms and clarifies her theory:

“They’re all lined up. I think they sort of toyed with the idea of it being Glenn because in the comics he’s supposed to be killed. They had done the fake out with him before but Negan said, ‘If anybody makes any noise, I’m gonna make it worse for you,’ and there’s no way in hell that Glenn’s getting killed, getting his brain smashed in, and Maggie doesn’t scream out. There’s just no way. It’s not gonna happen.”

So who does Mercedes Mason think was killed by Negan and Lucille?

“Maybe it’s Abraham. Especially in that episode. They really sort of focused on him being the good guy and hw helpful he is and they have a tendency to build a character up before they destroy them or kill them. Part o me thinks it had to be Abraham which I feel bad about. As long as it’s not Glenn or Daryl! I’m terrible! I’m a terrible prson!”

It’s an interesting theory and Abraham sees to be a popular vote for fans who are speculating who was killed. Michael Cudlitz (Abraham), however, is one of the few “batter up contenders” involved in that final scene who has not announced involvement with other filming projects. Josh McDermitt (Eugene) had been cast in the reboot of Twin Peaks though, reportedly, filming has already wrapped. Steven Yeun (Glenn) has joined the cast of  Okja. And Norman Reedus (Daryl) will be starring in his upcoming show, Ride with Norman Reedus.

And the theories continue! Do you agree with Mercedes Mason’s theory?

Let us know your thoughts in the comments section below and be sure to watch Mercedes Mason on Fear the Walking Dead Sundays at 9pm EST on AMC.