Though ‘Fear the Walking Dead’ is off to a rocky start with fans, you have to admit, there have been some incredible scenes in the series thus far. 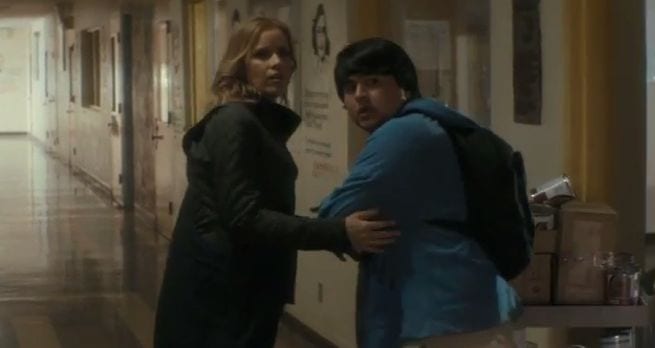 ET Online spoke with Kim Dickens, who plays Madison (Maddie) Clark, about her favorite scene, so far. Dickens says her favorite scene was when Maddie and her student, Tobias (played by Lincoln Castellanos), encountered the infected version of their principal, Artie Costa (played by Scott Lawrence). Maddie and Tobias struggle to escape from their turned principal and, ultimately, it’s Maddie who kills him with a fire extinguisher.

This was Maddie’s first realization that the “infected” people are dangerous and beyond help and, it also ended up being her first kill. This scene really struck a chord with Dickens. She says:

“I really loved the whole sequence, down to the end with the fire extinguisher. It was my first time really doing that in the genre. It’s a long sequence, but I really liked it.” She adds, “It was Madison’s first time she had to take matters into her own hands.” 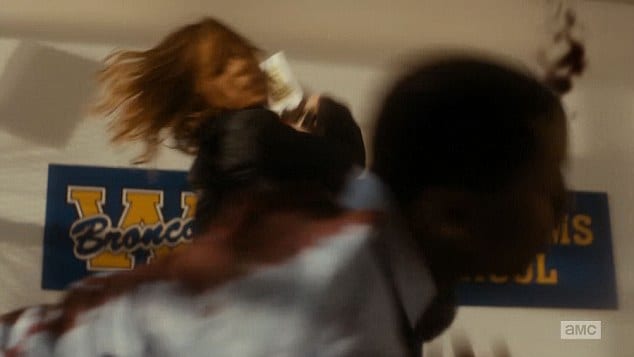 That scene was great and really enforced the fact that the apocalypse had JUST started. At that point in the show, we knew more than the characters (well, except Tobias, that is). We, the audience, knew the infected were dangerous, deadly and could only be killed by a blow right to (or straight through) the head. The FWTD characters were just figuring all of this out and that made this encounter with Artie so much more suspenseful.

Personally, my favorite scene, so far, happened in the season 2 premiere and involved Nick Maddie’s son), a zombie head and a boat propeller blade. It was gruesomely awesome and definitely made me grimace and squirm.

‘Fear the Walking Dead‘ is just getting started and there are sure to be many more awesome scenes still to come this season. The show airs Sunday nights at 9pm EST on AMC. You can read our recap of the season premiere, ‘Monster’,
right here. And check out a sneak peek of next week’s episode right here.

What’s your favorite scene so far?