Fear the Walking Dead showrunner Dave Erickson stated in an interview with TVLine that fans shouldn’t expect the same characters as in the previous 2 seasons.

Although they remain the same character actor, the characters themselves have gone through so many changes. Here’s a bit of what he had to say about our group of survivors,

“now they’ve been knocked around quite a bit. They went from the boat to the hacienda to the hotel, Nick went to The Colonia, and what they’ve seen is that everything in this world is impermanent. Every time you try to get a hold on something, it goes away. So moving into the season, the group is far more assertive and stronger.”

In a sense, comparing them to their counterparts on The Walking Dead, he went on to say,

“Travis has become sort of the apocalyptic warrior. He’s far more ruthless than we’ve seen him be before. And that’s going to ultimately compromise him and the family in ways that they didn’t anticipate. Having killed Andrés, Alicia has been knocked back a few steps… but starting around the fifth episode, she gets to a place where she becomes a bit harder and becomes more of an ally to her mother.”

And as for the matriarch of the group, he said,

“going to double down and abandon anything resembling mercy for a time. For her, in this world, you have to sell a piece of your soul to survive. And as we move through the season, Nick and Alicia are going to see that and come to understand what drives her.”

In the beginning, Madison will be more concerned with the reunification of the family as well as their safety. She feels the need to establish a safe place to settle down, at least for awhile. Then the come across the Otto ranch. Erickson describes these new characters as “incredibly dangerous and incredibly violent.” “There is an ugliness that pervades this ranch and an ugliness in Jeremiah Otto (Dayton Callie) and his youngest son, Troy (Daniel Sharman).” 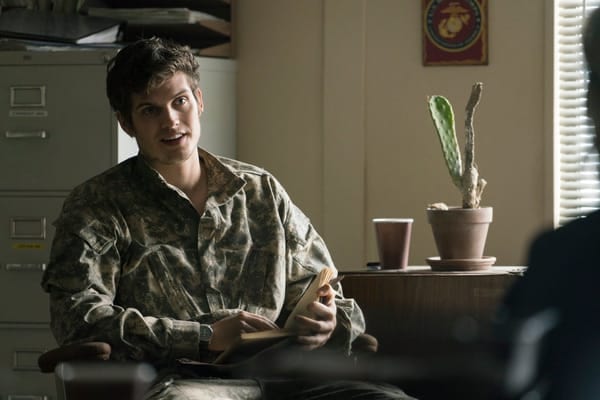 To what lengths is our group of survivors willing to go? We know from The Walking Dead, at times you have to be ruthless and a bit evil to keep your loved ones and yourself alive. Erickson concludes with saying,

“So it’s a somewhat tenuous existence for them. But they’re going to find a toehold and take control of their circumstances. The fundamental question is, how dirty are they willing to get?”

“Madison is going to suffer for some of the choices she makes. Not to say we’re going to fragment our family again by the end of the season, but there’s going to be a tension between them that didn’t exist before, because of the things that they’re going to deal with over the first half of this season.”

I honestly think that this show still has a lot of life left in it. Fans of the original seemed to be getting frustrated at the slow progress of the series. They just wanted to see action but no character or story building. I mean, I get it. The action is so much fun and at times, intense, but this is supposed to, eventually, lead up to the time where Rick and our group is. Who knows, they might through in a twist and have the two crossover in some way. There is still so much to explore and characters that we still wonder about, i.e., Morales and family, Tobias? With Gimple coming onboard in the fourth season, anything is possible. And you know Gimple…He loves to pull the rug from under us and then kick us when we’re down. That’s why we love these shows, or at least, why I love them.

Fear the Walking Dead premieres with a two back-to-back episodes on AMC on June 4, 2017 at 9 pm.