The storm is over. Sort of.

After an attempt to find Alicia in the storm, Morgan takes shelter in the back of an intermodal freight container. Within the container, Morgan finds a box that simply states, “Take what you need, leave what you don’t.” There is a variety of goods inside, including Morgan’s favorite in a peanut butter protein bar. As he takes comfort in knowing he has found a safe haven for the evening, he awakens to quite the shock.

While the weather has changed significantly upon him entering the container, Morgan looks up to see he has inadvertently caught a ride to Mississippi. Morgan takes a moment to let that fact sink in before stepping into the “Flip-Flop Truck Stop” to look around. Not long after setting foot inside, Morgan hears a voice coming from the radio instead of the truck stop. Appearing hesitant at first, Morgan eventually answers the mystery woman.

Upon explaining his situation, Morgan hears the words he found on the box of goods earlier. Proceeding to walk around the store, he enjoys a cup of coffee, he discovers the ample supply anyone could find useful in the zombie apocalypse. More importantly though, considering he has traveled an insane amount of miles, Morgan discovers a bathroom as well. Before taking advantage of the facilities, he outlines a desired route to get him back to Virginia unknowingly 400 miles closer than he was before. 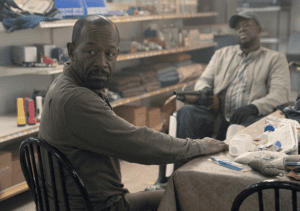 Giving into making himself at home, Morgan finds himself inside of the handicap stall of the store and soon in a very awkward position. As he hears the cock of the rifle Morgan has a simple request of a few more minutes inside the stall. As he makes his way out, we discover the first of three new characters within last night’s episode. Wendell is in an actual wheelchair and finally asks why people who are not handicap insist on using that stall. Morgan gives him an honest answer and says, “It always seemed like a little apartment.”

Not accepting Morgan’s words that he could have what he wanted in the store, Wendell continues to hold Morgan gunpoint until another Sarah walks into the store as well. Reigning in the situation, Sarah explains that the two new characters follow a simple code. “Keep on truckin’.” Their goal is to continue gathering supplies and leaving them at the mile markers in order to help others along the way. Morgan appreciates their efforts to keep the spreading help in a world that has so few willing to help.

Once loading up a car given to him with necessary supplies, Morgan attempt to head back to Texas. He needs to make sure that his friends are okay, despite Wendell insisting that they all died in the hurricane. There is clearly no way that anyone survived the storm in Wendell’s mind. Making it to the bridge that is thankfully not out, Morgan hears the voices of his friends. As he stares at the bridge, he loses hope and tells Wendell the bridge is out and he plans on heading back in their direction. 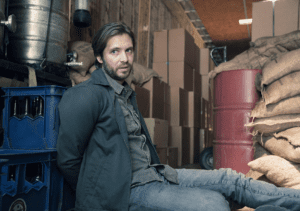 After making it back to “Flip-Flop Truck Stop” Sarah instructs Morgan to meet them on 91 at mile marker 64. As Morgan arrives to a bent sign, he hears screaming in the distance. Suddenly a man, Jim, appears running and weaving in between zombies, a burlap sack over his head, and his hands tied together behind his back. Morgan manages to save the man and discover he was a victim of kidnapping by two people who wanted his beer recipes. At first the notion of creating beer in the apocalypse seems silly, until Jim reveals he knows one day people will need to rebuild.  Morgan explains that he is meeting up with others who desire to rebuild and start anew too.

When arriving at the requested mile marker, Morgan makes a startling discovery. Sarah and Wendell were not who they claimed previously. In fact, they were the two people who kidnapped Jim for his beer recipes simply because Sarah likes beer. Sarah then insists that if “you can’t protect what’s yours it ain’t yours,” as her reasoning for stealing the tractor trailer rig. Wendell reveals that they are not all bad of course and left the original owner by one of the mile markers with his boxes.  Clearly the previous owner had resources so these new characters cannot be that bad right? Wrong.

Morgan immediately detects this from the moment he asked about Virginia once more.Refusing to give the information, Wendell determines that eventually they will get the information out of Morgan and keeps not only Morgan, but Jim tied up on the back of the trailer on their journey.  As they continue to drive Jim starts to believe that he can make the situation work for him and that Morgan should tell them where to go. Morgan realizes that he is not in the company of good people and no longer wants to be apart of that.

Eventually, realizing they must unload some of the goods from the back of the truck, Sarah stops the truck.  As Jim reveals his game plan to continue making beer, but refuses to give them the recipe. By letting them in on the cut and promising Sarah as much beer as she wants, she cuts the zip tie and attempts to get Morgan to tell them where his friends in Virginia are until Wendell spots a group of walkers.  Fearing that there is more where those came from, Sarah insists that they all get back in the truck. 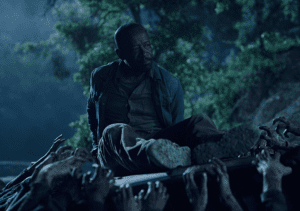 In an attempt to get an item discarded from the truck, Jim knocks Morgan down a hill with his hands still tied behind his back.  Unable to get back up the hill, Morgan jumps onto a nearby car before Sarah reached out to him via the walkie talkies they have used to converse the whole episode.  If Morgan tells her where the location in Virginia is she will aid in recusing him from the top of the car. After giving her the directions, Sarah decides she is going to leave Morgan stranded and surround by walkers.  An image painfully familiar to fans when Glenn and Nicholas were surrounded by walkers on the dumpster.

Morgan cannot fathom any reason why Sarah would leave him stranded only for Sarah to reveal they knew about the bridge.  She says, “But I guess we’re not the only ones pretending to be something they’re not,” before leaving Morgan stranded.  As the night goes on, he continues to talk to them via the walkie talkies. He purges his fears of not being able to help in the manner he wants to help his friends back in Texas.  Upon this realization though he knows that they cannot come back to save him.  Morgan feels he no longer deserves saving, but wishes they would come back so he could do the right thing.

Somehow, Morgan manages to escape the walkers and kills a good majority of them before he attempts to head back to Texas.  As he arrives at the bridge, Wendell and Sarah are waiting for him.  While they are still insisting on him telling him where in Virginia he plans to travel back to ultimately, Morgan only agrees to take them to Virginia if they take him back to Texas first.  He needs to do the right things.  He needs to realize he is not the coward he believes he is deep down inside. 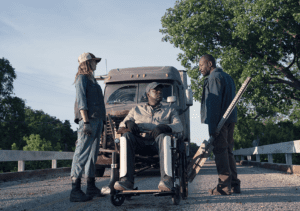 The episode ends with Morgan on the CB radio and supply boxes left at mile markers along the way. Fans learn that another new character received the message loud and clear. A character that appears to be far more dangerous than any we have previously encountered on Fear The Walking Dead. 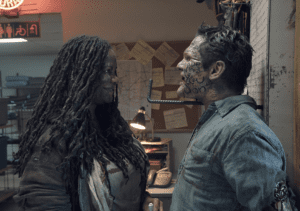 Did you enjoy last night’s episode? Catch the next episode of Fear The Walking Dead Sunday at 9pm on AMC!