Spoilers below! Be warned!

The Game of Thrones season 7 finale was an absolute payoff for long time fans that had been waiting for one revelation to come to light – the lineage of Jon Snow. We’d known for some time that Jon was actually the son of Rhaegar Targaryen and Lyanna Stark, but what still remained to be seen was whether or not he was legitimized. 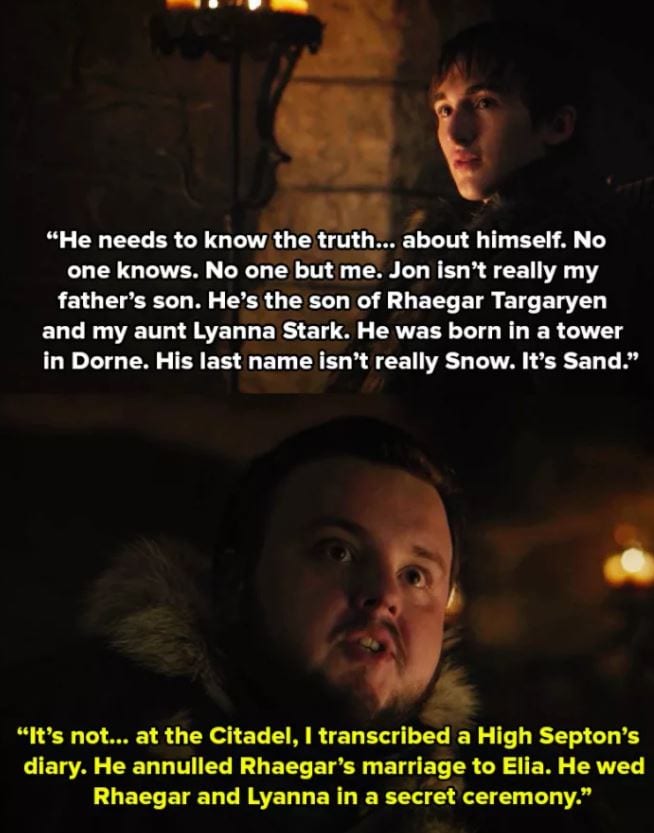 Well, last night’s “The Lion and the Wolf” confirmed that theory as Sam and Bran told viewers that two got married and were in love, making Jon Snow (aka Aegon Targaryen) the rightful heir to the Iron Throne. 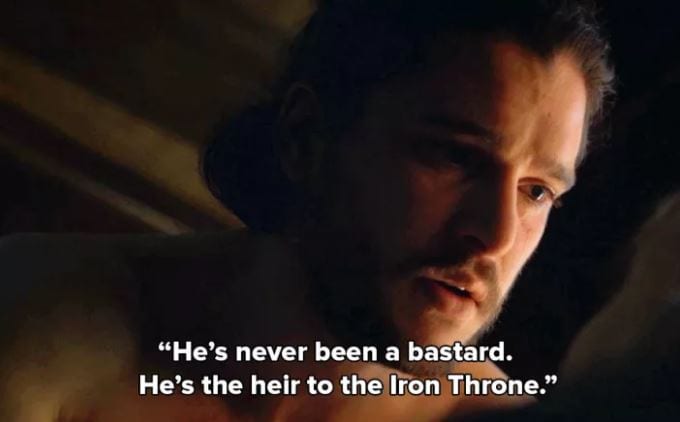 Now, this had been a scene fans had been long waiting to see and it’s execution was nearly perfect aside from one detail. Fans were quick to notice that in the flashback Rhaegar looked exactly like Viserys… so I guess you could say it was a little Vis-tracting? 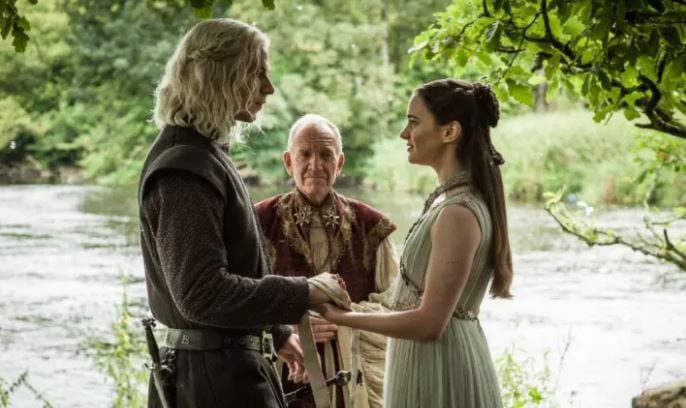 You remember Viserys, right? He was Dany’s older brother from way back in season 1 who forced her to marry Khal Drogo and was completely obsessed with people calling him “the dragon” and taking the Iron Throne?

Well, he definitely got his gold crown, just not the one that he wanted.

At first, some fans thought that the same actor that played Viserys came back to play Rhaegar in the finale.

So am I crazy or did they seriously get the same guy who played Viserys to play Rhaegar?! #GameOfThrones pic.twitter.com/nEhKBpNcsZ

Am I the only one who thought the guy who played Rhaegar looked a LOT like Viserys?? #Thronesyall #GameOfThrones

So am I crazy or was Rhaegar played by the same actor that played Viserys? #gameofthrones #demthrones

Then, they decided on the theory that it was probably just the same wig.

So that wig on Rhaegar was DEFINITELY the wig that they had used for Viserys, right? #GameofThrones

I’m 90% sure that they reused Harry Lloyd’s Viserys wig for Rhaegar. #GameOfThrones

HBO: We have no budget for the Rhaegar scene…

But seriously. Rhaegar and Viserys went to the same salon. #GoTS7

Why’d they give Rhaegar the exact same hair as Viserys? Were they trying to save on the wig budget? It wasn’t a good look. #GameOfThrones

Well, all bets should officially be placed on the wig theory because Viserys was played by English actor Harry Lloyd.

And Rhaegar Targaryen was played by Welsh actor Wilf Scolding.

But the resemblance is definitely uncanny, which I guess you would expect for characters who are playing brothers.

However, it’s not something fans were expecting because in the book Rhaegar was described as extremely tall and beautiful, with dark indigo eyes and long silver hair. So, fans naturally were a little put off by the fact that he looked exactly like his creepy jerk of a brother and show villain, Viserys.

Why is Rhaegar, who actually the most attractive man on Westeros looked exactly like that rat Viserys #GameOfThrones pic.twitter.com/vN6aBKvM0I

Rhaegar was supposed to be perfect and handsome and tall with long silver hair!!!! that looked like Viserys’ twin brother 😑 #GameOfThrones

We’ll have to wait until season 8 to see Rahegar Targaryen will be in any more flashbacks, but let’s just hope that Game of Thrones puts a little bit more money into their wig budget if so.