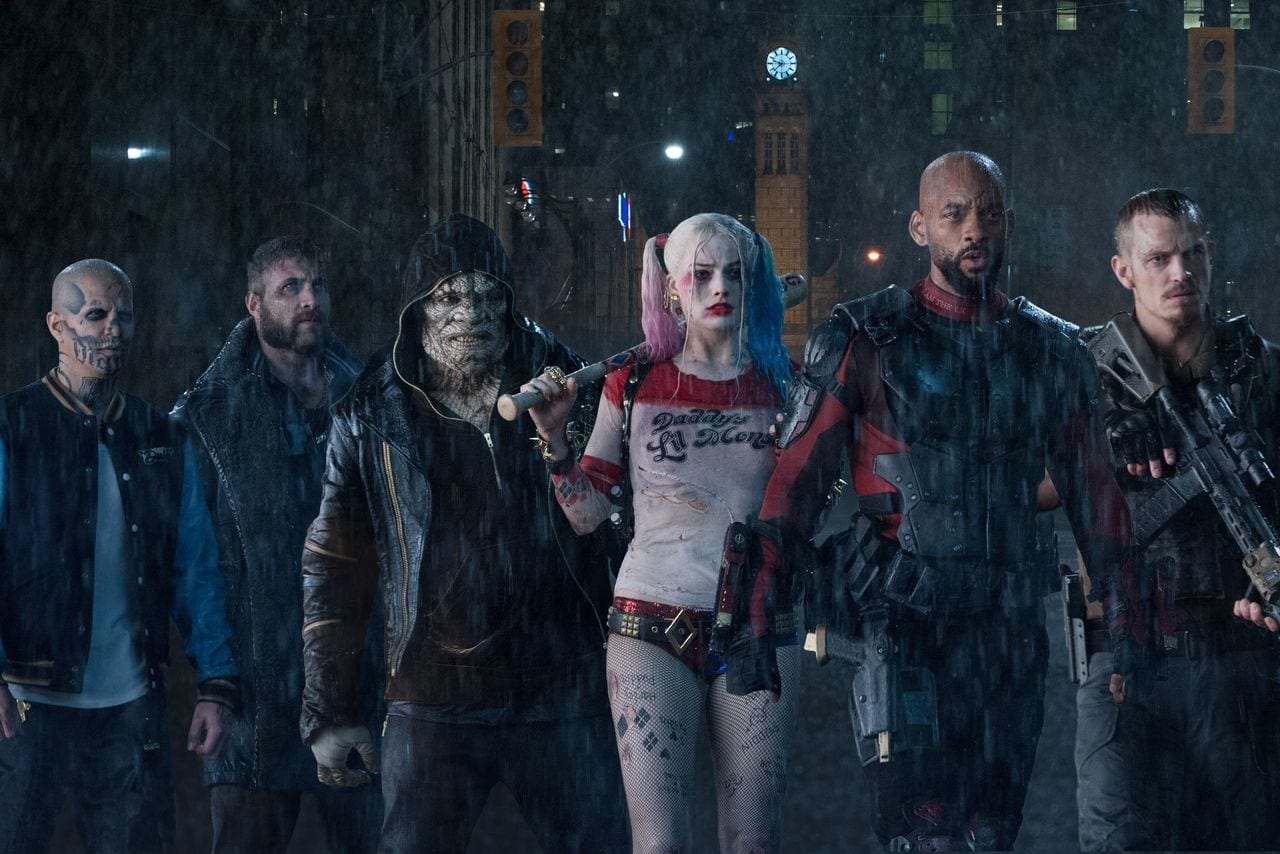 Despite negative reviews, Suicide Squad not only broke the record for highest pre-sale tickets on Fandango, it also set one – making $135.1 million dollars on its opening weekend, beating out Marvel’s Guardians of the Galaxy! Did it live it up to the hype with our staff, however? Check out their reviews below:

Julia – I would say I completely disagree with the critics. I knew when Suicide Squad was announced – more specifically, when Jared Leto was announced as The Joker, people were going to start comparing him to Heath Ledger’s amazing portrayal of The Joker. That being said, yes, Heath’s performance was amazing. But so was Jared’s. Why? Because they are two different kinds of Jokers. Jared’s angle of The Joker was written perfectly for him. The eerily creepy look and personality of The Joker fit him. The writers wanted to write him to be different and they succeeded!

I thought everything was amazing. From the performances of the actors in their respective roles to the balance of action and comedy. The music was quite amazing too! GRADE: 9/10

Parish – I don’t agree with the critics. I thought it was pretty awesome actually. Could have been more action and definitely more sadistic Joker scenes, but overall it was goooood. GRADE: 4/5

Estefania – I thought the movie was excellent. It was entertaining from beginning to end. I can’t begin to describe how awesome Margot is as Harley and Viola’s Waller is perfectly terrifying. I think there may have been some stuff that I saw in the trailers that I don’t remember seeing in the film, but it doesn’t take away from how great it was. The soundtrack was on point and Steven Price’s score moved me just about to tears in some parts. GRADE: 4/5

Ashley – I think the people who were disappointed expected a lot of action from the film and while I could have done with a bit more fight and definitely more Joker, I liked the way they let you learn about the characters (especially their desires with Enchantress) and how they painted a good firm foundation for future films. I’ve read the comics so I can see wanting more but I really, really think they aced it. GRADE: 4/5

Kevin – I thought the movie was disjointed, poorly edited, and a bit basic. I never felt them gel as a team buuuuut Deadshot, Harley, and Waller SHINED. And despite those faults, I enjoyed it. I think how disjointed the film is works in its favor because so are the characters. Leto’s Joker is a bit over the place but stands on its own outside the shadow of Ledger’s. All in all, it was fun in its own perverse way. GRADE: 3/5

Brianna – I saw it with somewhat lowered expectations after the critical response. It worked for an introduction to these characters and had certain parts that worked but felt off as a whole movie. Deadshot and Harley were my favorites, with Viola Davis’ Waller as a close second. Loved that there was that emotional connection to Deadshot’s story and I wish we had that for the others as well. Really enjoyed Harley’s big moment though. I wasn’t a fan of Leto’s Joker. Felt like it fell a bit short. The music cues were sometimes random but fun. GRADE: 3/5

Kyle – There are three important factors when considering my review: I really like DC Comics, I love Batman like a lot, and I don’t watch things from a critical perspective. I generally find something I love in everything I watch. So, it’s no surprise that I loved this movie. I think Viola Davis as Amanda Waller was perfect. Her performance will get looked over due to Harley/Joker mania, but nonetheless, she killed it… literally. The entire squad was interesting together and individually! Having Batman scattered throughout was important as these were mostly his gallery of villains, plus Ben is flawless as both Bruce Wayne and The Bat! Visually, the movie was stunning, as I saw it in 3D. I loved the soundtrack and the score. I wasn’t crazy for The Joker, however. He looked really cool and his madness was unique, but I think they overplayed their Joker card. His relevance through production far outweighs his actual performance. GRADE: 4/5

Shikha – Despite the reviews from critics, I liked it. Could there have been more Joker? Absolutely! But I felt that it gave me what I wanted: humor, action, and a decent storyline. Margot Robbie as Harley Quinn was awesome! I thought she brought some great comedic moments and you could also see a lot of her craziness and love for the Joker. Will Smith as Deadshot was pretty good… I liked how he got the team together. I would’ve liked a little more backstory on some of the other characters, but I didn’t mind that they mainly focused on Deadshot, Harley, and Enchantress. Speaking of Enchantress, I thought Cara Delevingne did a pretty good job! She played the innocent doctor and evil witch well. Viola Davis as Amanda Waller was great casting! Her tough and deadpan stare fit the part of someone you don’t want to mess with. And as for the Joker, even though he wasn’t in it as much as I would’ve liked, he played the part well. Hopefully we’ll see more of him in future films. GRADE: 4/5

Naomi – There are some blanks that need to be filled and I’m hoping for an extended version. The movie seemed a bit short but the music was so good. It all fit. I’m mostly surprised at Enchantress. I REALLY like the whole character! She’s evil, but my god, what a good role! Harley Quinn is and always will be my female crush (as long as Margot Robbie plays her). The Joker was so intense, it actually scared me a bit. Because of that, I think that’s why a lot of people don’t like this version of him. He surprised me as well, but I shall need to see the movie again to know if I truly liked him! GRADE: 3/5 (with a possible 4 later on).

Alyssa – I thought Deadshot, Harley, Waller, and Diablo were great. The bar scene was by far the best scene of the movie. I thought it was disjointed and poorly paced, but moving forward, it has potential with the characters. GRADE: 3/5

Denise – First, let me start off by saying, I REALLY wanted to like this movie. My expectations were low but I wanted the movie to prove me wrong. That being said, I don’t think this was a good movie BUT, it was not nearly as bad as I thought it would be. I feel that it started out strong and grabbed my interest but it lost me somewhere along the way. Scenes were unnecessarily dragged out at times, which I think contributed to my boredom mid-film. Margot Robbie was okay, but just about all of Harley Quinn’s “funny” lines were shown in the trailers, so the audience didn’t even react when she spoke. The Joker is barely in the film which makes all the stories from the set and hype surrounding Jared Leto (whose performance was also okay) seem stupid. Will Smith did a good job, as always. I liked his character, as it was one of the only ones I felt a connection to, as well as Croc and Boomerang. Diablo was awesome and quite possibly, my favorite character. I felt like I could tell which scenes were the re-shoots, because not all of them worked with the film. They just seemed odd and out of place. Post-credit scene kind of wasn’t worth it to me. Overall, the whole thing definitely felt disjointed, and while I feel like DC had a great opportunity to create an amazing film, they missed the mark. I still think it was entertaining but I wish it was a better film. GRADE: 2/5

Kirsteen – I went in expecting a horrible mess like the critics are saying, but as someone who had an idea of what I was getting into, I felt like Suicide Squad did belong to the DC Extended Universe, even the animated one. The movie was very straightforward and led to the action right away. It sometimes felt like the movie was holding your hand through it, which is a different feel from the very convoluted messages and themes that the previous Zack Snyder films from the DC Universe have done. I, for one, didn’t mind it as much because I was actually expecting the handholding to happen, and I feel it could benefit people who are just getting into the DC Universe. It’s a simple plot, yes, but it works in this kind of bad guy ensemble movie where the personalities are actually bigger than the story it’s involved in and allows the actors to shine in their roles.

Speaking of actors: Will Smith, Margot Robbie, and Viola Davis didn’t just breathe life into the characters they played – they became the characters. Kudos also to DC for casting actors who match the race of their character! (Side-eyeing you, Marvel) Unfortunately, for the only method actor in the movie, Jared Leto, I felt that his Joker was forgettable. I think I could take the movie and cut out the Joker’s solo parts in it, and still have the movie make sense. That’s how forgettable he was. I literally only remembered him because of his scenes with Harley, and even then I remember more about what Harley went through under her abusive relationship with the Joker rather than the man himself. It felt like he was trying too hard to be edgy instead of focusing on a definite presence or feeling that would be distinctly his Joker and his alone.

I do have a problem with some of the “for the male gaze” shots with Harley, the use of the p-word to describe a coward (which is a whole other post), the lack of (cinematic) focus on the backstory of the more diverse characters of color like Katana and Killer Croc, and the portrayal of Harley and Joker’s relationship as romantic, even though in the new 52 adaptation and the assault on Arkham adaptation, Harley has broken up with the Joker and is recovering from his abuse. However, I did like how Harley’s past at Arkham was shown. It gives her more substance. I also liked how Deadshot was shown as a multifaceted character – an assassin with so much love for his daughter that he tries to keep her away from his job. It’s really good to see part of an antihero’s motivations and it’s a big factor in actually rooting for the squad to succeed in their mission because Deadshot is their actual leader, despite Rick Flag and Amanda Waller being the ones pulling their leash. That’s a great difference between a leader and a dictator right there. Overall, it’s not as big a mess as critics said. GRADE: 2.9/5

Jessenika – Despite what the critics said, I thought Suicide Squad was really good. I have a few minor complaints about the film but the only major one is that it had a disappointing villain. As expected, Margot Robbie and Jared Leto were phenomenal, especially Jared! Dare I say, his Joker surpassed Heath Ledger’s because he portrayed the Joker exactly how he was meant to be portrayed: comical, but most importantly, frightening. Will Smith also did a fantastic job. I agree with whoever said this film is the best of his career so far. The Batman scenes were excellent too. I loved every minute of them! It’s too bad he and Joker didn’t have more scenes together. GRADE: 4/5

Do you agree with our staff? What grade would you give Suicide Squad?