Recently, I had a chance to interview on my podcast “The Dave and Creech Show” Tom Green,star of the upcoming horror thriller Bethany, which is coming out on April 7th and also stars Zack Ward and Shannen Doherty.

If the name sounds familiar, it should as Tom was a staple in comedy in the early 2000’s from his popular MTV show “The Tom  Green Show”  and memorable appearances in films like Road Trip, Charlie’s Angels, and Freddy Got Fingered among others. Currently, Tom travels the world doing stand up, and occasionally dabbling in entertainment like his Donald Trump rap video for Funny or Die last year. What follows is some of the exclusive highlights of our podcast, which will be out next week: 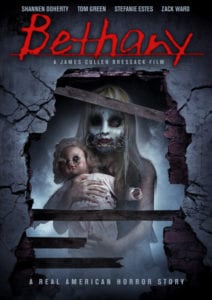 What made you want to get involved in a horror movie?
“I actually am afraid of horror movies!(laughs) I rarely watch them, they scare me. Growing up I was terrified of them. All my friends were watching Friday the 13th and A Nightmare on Elm Street  and I would just say ‘You guys go ahead, I’m gonna go skateboard. I can’t watch this!’ I did enjoy doing this (film) though. It’s not actually scary during filming, but at times you definitely do feel the tension in the scenes as an actor and I know the film is definitely going to be scary to watch.”

While you’ve been known for your comedy work and with this being your first foray into horror, have you tried your hand at any other type of dramatic storytelling?

“Comedy is really analyzing life and the absurdities and negative aspects of life and trying to make them funny. So most comedians can very naturally transition over to more dramatic roles. When I do standup I get up on stage every night, I’m performing every night and I’m talking about very dark subjects but then you flip it on its head at the end, and it’s funny. While here(on Bethany) we’re addressing very dark subjects and we’re just keeping them very dark subjects. I’d love to do more of it.”

Given that you’re a veteran of comedy, was there any nervousness about acting in a thriller?

“There was definitely some nervousness about it, but I look at it this way: there should always be some sort of nervousness involved. When I made any movie, the comedy comes from serious situations. So even in a movie like Road Trip where the plot is absurd or silly: A guy sends a sex tape to his girlfriend and they don’t know if it’s in Austin or Boston and i’m trying to feed a mouse to a snake and all these silly things are happening, the character is still really serious about the things he is doing. You have to bring the same intensity to a comedy performance that you would a dramatic performance and in a lot of ways, there’s not a lot that is that much different.

How long have you been doing standup?

“I’ve been doing standup off an on since I was 15 years old so technically, I’ve been doing standup for 30 years now. About 8 years ago, I decided I wanted to do this full time and focus on it so I’ve essentially been on a nonstop world tour since then. I’m very fortunate that MTV picked up my show off of a public access station when I was in my twenties and put it on TV all over the world. It led to some movies like Freddy Got Fingered and Road Trip, which have really cool cult followings all around the world. So I’ve been blessed to be able to do what I do. I have great fans, who’ve followed me from my web shows, podcasts, and the things that I’ve done(since). I’m always trying to write new jokes and come up with new ideas. With the World being such a crazy place right now, it’s a great time to be doing stand up. As a Canadian looking in, I have a different take on all the events going on plus I’ve been fired by the President (Donald Trump) on the Celebrity Apprentice. Like I said, Strange times.”

A year ago, there was some oddly hilarious news coming out of Concord,North Carolina. Someone was arrested for renting Freddy Got Fingered  when it came out and never returning it. Now the rental store had long gone out of business, yet the warrant was still active. You reached out to offer your help after finding out about it, can you tell us a little more about it?

“Yeah, absolutely. I called him, I spoke to him and offered to pay his fines. Fortunately for him, the charges were dropped and he didn’t have to pay a fine but what a hilarious story. The kid rents Freddy Got Fingered in 2001,and in 2016 gets pulled over for a broken taillight and the cops arrests him and charges him with theft because he failed to return his videotape 15 years ago. I thought that was just a silly situation. I felt bad for the guy when I heard about it on Twitter so I reached out to him, offered to pay his fine, had a good laugh talking with him about it and I’m so glad he didn’t get into any trouble.”

If you enjoyed these excerpts, be on the lookout for the full interview when it releases soon on “The Dave and Creech Show” and make sure you check out Tom out in Bethany when it comes out on April 7th!