Walker Stalker Con Atlanta took place this weekend where the majority of the cast of The Walking Dead came together to celebrate their fans. Those in attendance included Norman Reedus, Andrew Lincoln, Jeffrey Dean Morgan, Lennie James, Danai Gurira, Lauren Cohan, and two favorites who the show tragically lost during the premiere last weekend-Steven Yeun and Michael Cudlitz.

The events came to a close Sunday, but we got the amazing opportunity to sit down with Khary Payton, who plays Ezekiel on The Walking Dead. Ezekiel made his first appearance during Sunday’s episode, and boy were we not disappointed.

Take a look at what the wonderful and hilarious Khary Payton has to say about playing this awesome cat-tastic role.

Shannon: Have you ever been to a convention before?

Khary: I have been to a convention before because I did a lot of cartoons and video games, Teen Titans and stuff like that and they’re always really great. Fortunately I really like all the projects that i’ve worked on so I love to talk to the fans about it. It’s kind of what’s happening in your life at the time. You have this bonding moment with a show, and I’ve had people crying on me saying “I went through this tough time and this helped me get through it.” This feeds my soul to be able to connect with people on that level.

I’ve done a couple where I come back a couple years later and those same poeple are there. There was a guy who I met in New Orleans-he told me he wanted to be a marine. Two years later I came back and he was one of the first in line. He was like, “I just want you to know, I’m a marine. I told you I would do it. That kind of stuff is amazing.

With this character, I know people are gonna connect with him and I can’t wait to have those kinds of experiences with fans with Ezekiel.

Shannon: How exciting has it been to come onto a show like this, how crazy?

Khary: It’s been great, it hasn’t been crazy because I’ve had to hide for most of this time. Of course I was excited when I got the job. After a couple weeks I got the the script it was so much that I did’t have time to be excited or nervous or wonder how big this community is. I had work to do so I immediately just kind of got to it. After we got through a couple episodes then I had down time. I didn’t tell anybody, I didn’t tell my mom. Because my mom can’t keep a secret. I love you mom, but you can’t keep a secret.

But literally I couldn’t tell anybody. That was the hardest part for me. They were like “what are ya’ doin?” I was like “A project.” “What kind of project?” “Um the biggest project of my life!” They were like “Tell me about it.” I’m like “No! I can’t!” So finally people are gonna see the show and talk about the story. I think the story is so great. The characters are so great. I’m tired of talking about the fact that I got the job now, I want to talk about the story that we’re telling, you know? I think people are really gonna love it. 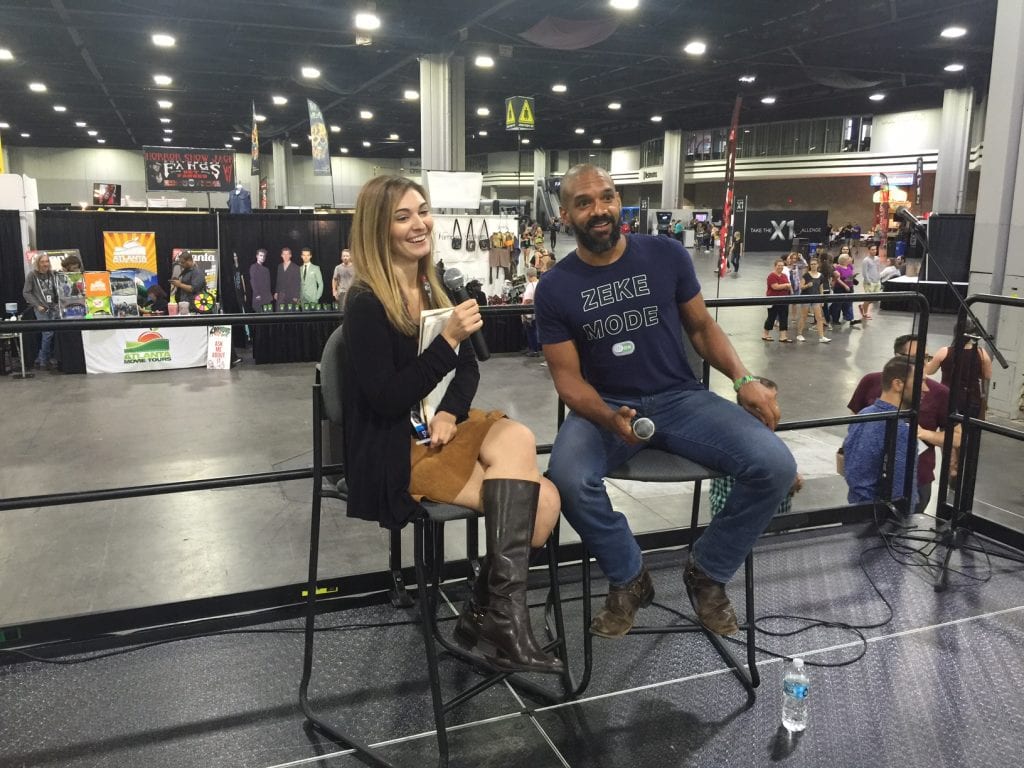 Shannon: So what can you tell us about Ezekiel, who is he?

Khary: I can tell you nothing about Ezekiel. No no no, you know what? This is an exclusive. Ezekiel is actually a 24 year old white girl. I know I know. Nobody believes me. But that’s the truth. You heard it first here.
I think that the first episode gives you such great insight into the character. He kinda lays it all out in that first episode. And I want everybody to have that experience. If they haven’t read the comics and are coming into this kind of fresh, I want them to come in and see it with new eyes. Like a brand new baby! Like a brand new baby character.

Khary: He’s exuberant and he loves life. He’s not the kind of character that would let the fact that there are dead people walking around the earth get him down. He’s a pretty awesome guy.

Shannon: And we do know that he’s got a tiger. So does this make you see the phrase “dog’s are mans’ best friend” differently? Should we change the word to tiger?

Khary: No, because everybody can’t have a tiger. Dogs still have their place I’ve just got a little bit better goin on for me.

Shannon: So if you could have any animal sidekick what would it be?

Khary: You know, what when the lord blesses you with a tiger, you don’t start saying “You know, I really wish I could’ve had a bull.” No I think I’m gonna stick with a tiger. (Laughs)

Khary: This is another exclusive. They look longingly into each other’s eyes, and simultaneoulsy punch each other in the face. It’s weird. Because it comes out of the blue. I didn’t see it coming. It wasn’t in the script. I just got a bad feeling about Andy and he got a bad feeeling about me. We worked it out, but no, I can’t say anything about that!

Shannon: But it is gonna be intense probably-if I were to guess. 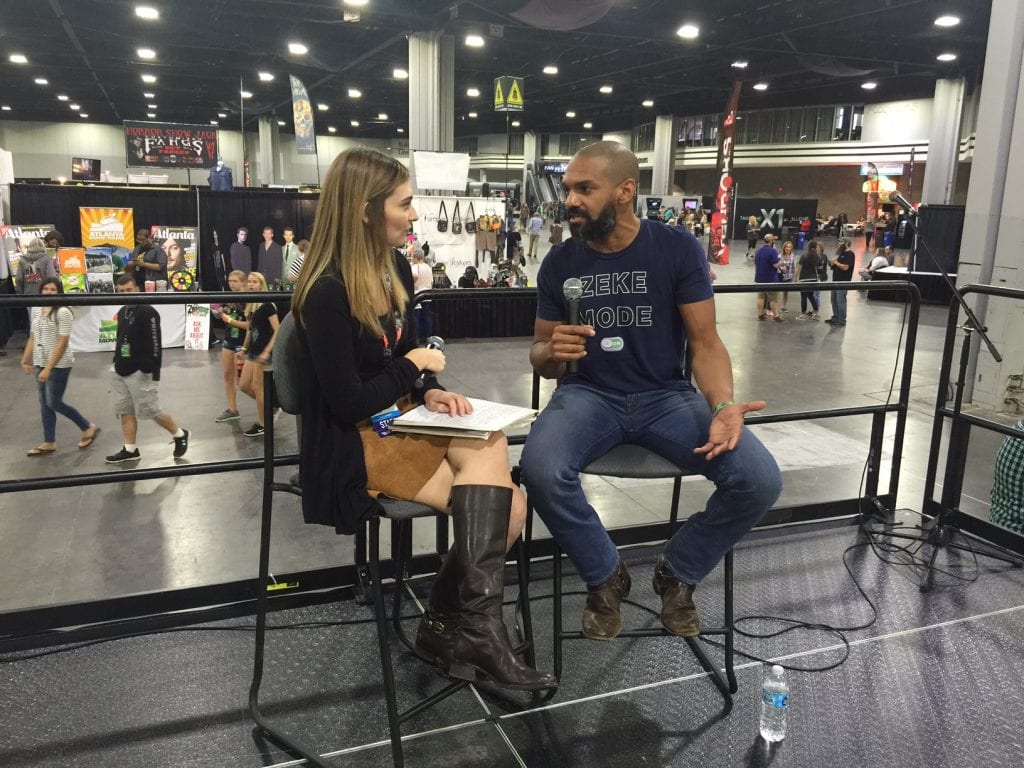 Shannon: What did you think of the first episode of the season?

I thought it was gut wrenching. But it was also a great episode of television. That kind of episode, you need 6 years to be able to build up to something like that. And I know people are really upset but this is The Walking Dead and you lose people in this world. The thing is when you lose people like Glenn and Abraham-it has to impact you.

It wouldn’t have been worth it if somebody drove up in a car, walked out and said “Hey guys guess what? Abraham and Glenn are dead.” It’s gotta have gravity and a certain amount of violence. This is a show where we cut off a dude’s leg and ate it in front of him. So on this show, we can’t go half steppin’. But the way they played with time-It was an amazing episode of television.

Our saving grace is obviously Jeffrey Dean Morgan. Because he’s the most charming dude. Because I laughed at his jokes-after he bludgeoned two people to death. I literally thought to myself “What’s wrong with me?” How charming do you have to be? I wanna smack him in the face. He’s all grizzled with dimples and i’m like. “Why? why do I like you?” It’s the kind of episode that you need a couple of days to come down from.

But you get something like that and then you get a character like Ezekiel to pull you back in the brink and I’m excited to be a part of that process.

Shannon: We are Fan Fest. For fans, by fans. What are you a fan of?

Khary: I’m a fan of The Walking Dead. My wife watches every episode and I’m like “Ah I can’t watch any more!” But I come back in and iI’m like “Can you rewind it?” I get invested. The fact I’m working with Lennie James and Danai Gurira on this episode.-two of the most talented people you’ll ever meet. When Morgan is in his house looking out the window in that first season, trying to get up the strength to shoot his wife. That was the moment I realized this is not your normal show. This is about family. I’ve been sucked in ever since.

He is certainly right about that!

Be sure to tune into The Walking Dead Sunday nights on AMC to see Khary as Ezekiel!