If you’re on social media, you know that there are few things as incredible as seeing a meme that just…embodies it. The best thing is, there are so many places these memes can be born from, some you’d never even expect, and they end up making total sense.

Like the squat and squint meme, or SpongeBob episode that produced two relatable memes, and the ever famous idiot sandwich. Some simply struck gold.

Speaking of striking gold, a meme was born of a stock image where a girl catches her boyfriend looking back at another girl. It’s all over social media and it’s already been recreated with some hilarious circumstances.

So when a fan of the Avengers saw an opportunity to recreate it, well, they nailed it. In fact, we think it’s better than the original and that’s not a thing that happens very often, if at all. 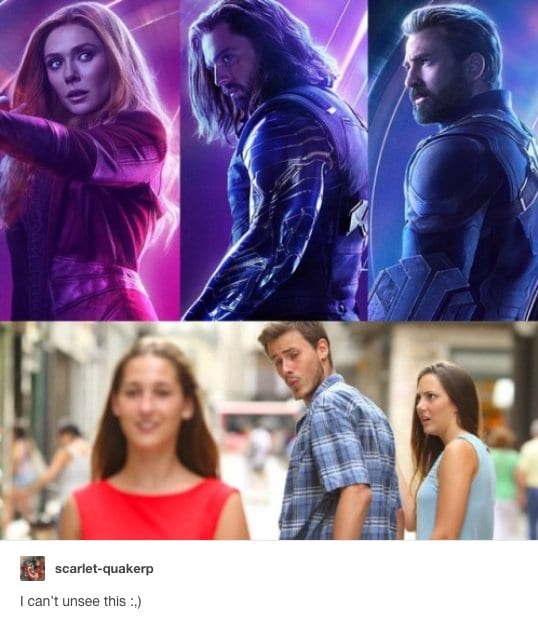 Originally created on Tumblr, the meme was also posted to Twitter and went viral. Many replies were in total agreement with the meme setup. Some hoped Sam Wilson wouldn’t take the news too hard and others said that they can’t turn away from Scarlet Witch when they see her as well.

While the build-up towards Infinity War is emotional, it’s nice to have some carefree moments in the fan base. Ya know before we see Thanos trying to destroy everyone we love.