As we draw closer to the season premier of some of our favorite CW TV Series, the anticipation and excitement from the Fan Fest team has never been higher. While we are highly looking forward to seeing where the next seasons will take us, but one thing we may not be looking forward to is the emotional trauma these shows like to inflict.

The Arrowverse is littered with moments that pull on our heartstrings, from sentimental scenes to character deaths. Though we sometimes hate them, we really wouldn’t have it any other way. A show is a good one when it makes you feel, and the Arrowverse really knows how to make us feel.

In an ultimate dynamic duo event, Arrowverse expert Jules and I have compiled a list of the most emotional moments across the Arrowverse fandom.

5. Sara Finds Out About Laurel (Legends of Tomorrow, ‘Legendary’) 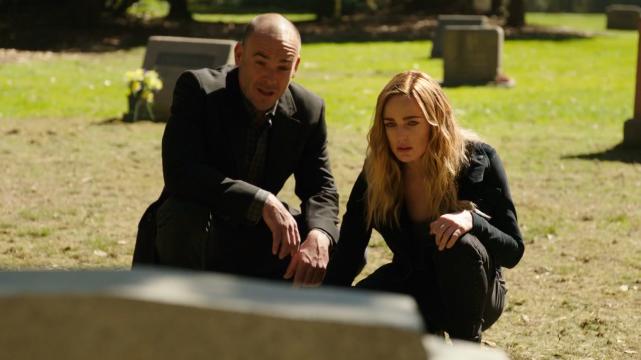 Jules: Sara has gone through an incredibly heartbreaking journey over the course of her life. When she finally found a place where she felt she had purpose, in being a ‘Legend,’ she thought she could protect all of her family and friends. It was incredibly heartbreaking to see her come home to the Arrow cave, all excited to see everyone, only to find out the truth about what happened to Laurel. Seeing Sara and her father embrace absolutely broke my heart – and what made it even worse was I knew Sara would blame herself.

Eddie’s Message to Iris (The Flash, ‘Flash Back’)

Alyssa: Barry was never a big supporter of Iris and Eddie’s relationship because of his feelings for Iris. In the episode ‘Flash Back,’ Barry went back in time to solve one problem and ran into Eddie. Before leaving, Barry had Eddie record a “Birthday message” for Iris, telling her how much she meant to him. His short message to Iris broke all of our hearts, especially since this was in essence when Iris came to terms with his death and was finally able to move on. Eddie, you are greatly missed.

Jules:  Growing up without a mother and a father (who was wrongly convicted) was already hard enough for Barry. When he was finally reunited with his dad, it was all sunshine and rainbows. Barry would finally get the chance to be his true father’s son. However, Zoom was determined to take everything away from Barry…and that he did.

Alyssa: The 100th episode of Arrow was brilliantly done, bringing back all of our favorite characters throughout the past five seasons to exist in a dream world the Dominator’s created around Oliver. After the spell has been broken and Team Arrow is making their way out of the fantasy, Oliver is visited by the spirits of those that are close to him, including Roy, Laurel, Felicity, Tommy, Moira, and Robert. They echo words spoken to Oliver by each in previous seasons, strengthening his newfound role as a real hero. It was almost like Oliver was finally letting go of his past and moving forward with his life. It’s so simple, each only get a sentence, but so very powerful when they are all spoken back-to-back. I got emotional just rereading what they said to write this article!

Jules: Although many people grew to hate Moira for her twisted motives, she was still the mother of one of our favorite sibling superhero duos. What made this death most heartbreaking was the fact that Oliver and Thea were completely helpless to stop Slade from murdering their mother. It broke my heart to see Oliver and Thea in such tremendous and overwhelming pain.
Alyssa: Moira isn’t a good person. She made her fair share of mistakes, but in the back half of Season 2, she started to redeem herself.  The episode features a flashback in which Moira protects Oliver, paying off a woman he slept with who ended up pregnant. It probably wasn’t the right thing to do, but she acted in the best interest of her son, trying to shield him. And that’s when you knew she would always do everything in her power to protect them. So that final scene when she tells Slade to kill her and spare her children, your heart just breaks. There’s so much packed into those last moments of the episode and Moira’s death still hurts, even the fourth time watching it. 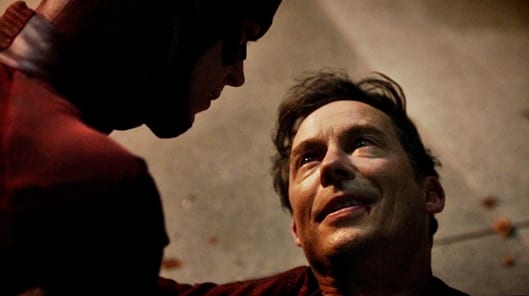 Jules: A sort of quirky comic relief to the show – I found myself growing attached to H.R. He was a complete and total hero in the end, risking his life so that he could save Iris – dying peacefully in Tracy’s arms. (Alyssa: This moment was also on my list, though a little bit lower. The shock of his sacrifice and just the way the scene played out was so well done. I agree with Jules; he died a total hero.) 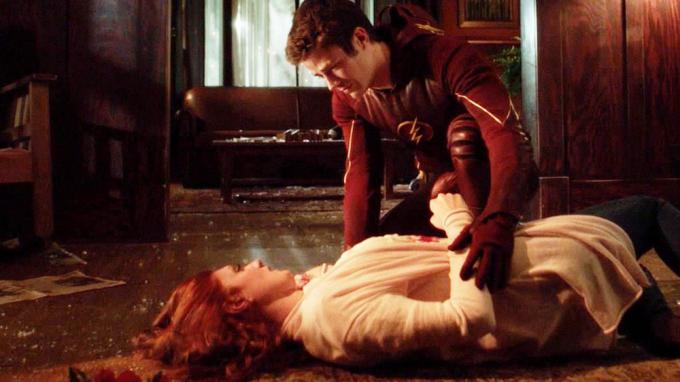 Alyssa: Barry has been through so much, and finally, in the Season 1 finale, Barry has the ability to go back and change the past. He can save his mother. But when he gets there, another version of himself warns him not to interfere. Barry obeys and lets Reverse-Flash kill her. After Reverse-Flash and Flash leave, Barry enters the room and goes to his dying mother. He reveals himself to her, telling her that he and Henry are okay and that they love her very much. Grant Gustin and Michelle Harrison absolutely destroy this scene. Also, Nora’s line to Barry when she sees what he has become, “My beautiful boy,” is exactly what Moira says to Oliver when she first sees him at the hospital after he is rescued from Lian Yu. 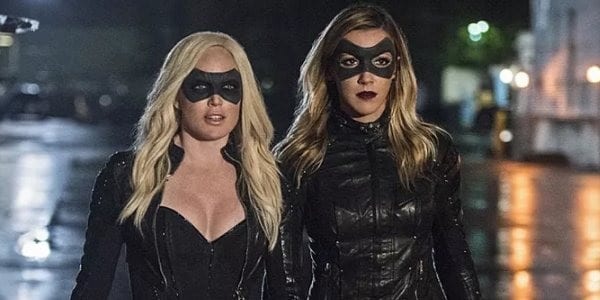 Jules: The death of our beloved Canaries, both Laurel and Sara, to this day still make me tear up every single time. We grow so attached to these characters, relating some of their moments to our own. Sara’s death was a complete and total shock, and was probably one of the more heartbreaking deaths I have ever seen on TV. Laurel’s death was equally as heartbreaking – and the reaction from her friends and especially her father, are what made the tears really start to fall for me. Although Sara came back to us, and Laurel did also (only in a more…evil form…) I am hoping we never have to see our pretty birds fall ever again.

Alyssa: This moment was so perfect. Stephen Amell and Susanna Thompson absolutely nail this scene. It’s such an important moment because for five years, Moira believed that her son was dead, and even believed that someone was playing a trick on her when she picked up the phone. It has such an impact, and I’m so glad that it was added to the episode at the last minute. If this scene had played in the first episode of the series, it wouldn’t have had anywhere close to the emotional weight that it carries now. And again, the line, “My beautiful boy,” is repeated.
Honorable Mention: Tommy’s Death