I never really realized how fortunate I was to live near a zoo, until I had my son.  I remember my father taking me to the zoo with my brother when we were younger. Having a son who’s love of animals is really shining through, just like me.  Besides taking him to the local pet store (that I work at) it is wonderful to be able to take him to the zoo.  In Norristown PA there is a small zoo by the name of Elmwood Park Zoo.  This zoo has been around since 1924.  Which is absolutely amazing!! Now it may be anything fancy, but they have come such a far way.  With having a membership, I was fortunate enough to enjoy the beautiful weather last week with my son and father. 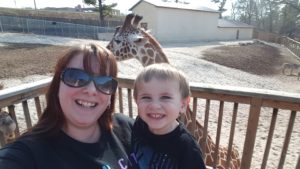 One of my favorite (and my sons) is feeding the giraffes.  You are given three pieces of lettuce and head up to a platform to feed them.  You are not allowed to touch them, and you have to be careful because they will try and take loose items.  While we were feeding them, the 8 year old tried to grab a woman’s purse. 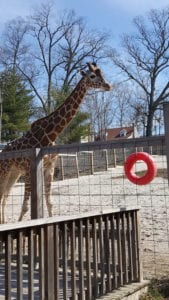 They have two there.  They use to transport them in the winter time, but after a few years of seeing how popular they have become,  they built a house for them for the winter time.   There are also Zebra’s that roam the same area. 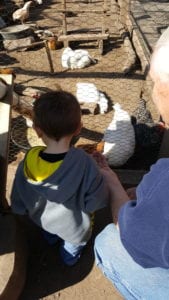 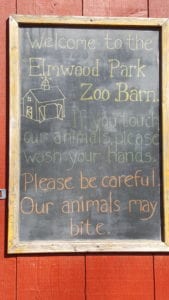 Children (and us adults) have the opportunity to feed the barn animals.  These barn animals have been here for what feels like forever! I remember feeding them when I was little.  But be careful, they may bite! 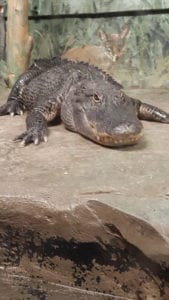 Meet Penny the alligator.  She has been at the Elmwood Park Zoo since 2007.  She was not this big when they got her.  During the summer, they have an outdoor area that she heads out to.

By far my favorite animals there would have to be the red pandas.  There is currently only one since one of the brothers had passed in January due to heart complications.  At one point, they housed the mother and another brother.

Come the summer time, Elmwood will be opening a jaguar exhibit.  Currently they have a male and female that are hanging out in a set of original cages.  On January 24th the zoo welcomed two cubs to the zoo.  Mommy is with her babies and will be housed in the new exhibit once opened.

This zoo, like I said, may not have much.  But it has a special place in my heart. 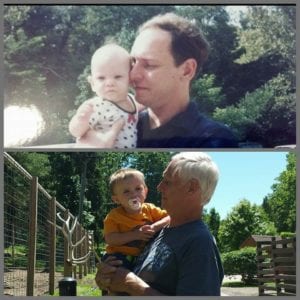 It’s a place where I was taken when I was a baby by my parents.  I hope to keep up this tradition of taking my son there.  As the zoo continues to grow, it has become gotten more and more attention.  I’ve met people that have come from all over just to visit it.  People have told me how lucky I am to have a zoo so close to home.  You know what?  I am.

If you ever find yourself in the town of Norristown Pennsylvania give the Elmwood Park Zoo a chance.  The animals will thank you for it.

Sarah is a comic loving junkie who takes pride in her nerd-ism. Growing up, she found herself drawn to the Batman comics and Philadelphia Sports. You never see her without a comic book or camera in her hand. Sarah loves photography, comics, and her family more than anything else in the world. <3