While San Diego Comic Con is the home of many trailer reveals, celebrity gatherings and geeky exclusives…my favorite part of the event are all of the offsite events and activations. In this article, I will be highlighting some of the best offsite events and activations throughout the weekend. While these are in no particular order, I will rate them out of 10 and give reasons why they received that score.

Video footage of all the experiences is soon to come, so keep your eyes here for detailed coverage of each of these detailed and awesome experiences!

The Jack Ryan Fan Experience was made of up of two different parts that you could participate in. One was Dark Ops (an immersive escape room) and the other was Training Field (a VR obstacle course).

Dark Ops was an incredible use of practical effects, Amazon Echo devices and elaborate sets. I’ve done many escape rooms, and the detail in this one was one of the best I’ve ever seen! This is quite the feat to accomplish, because, the creative team behind it built it and designed it specifically for SDCC weekend. The actors inside were fantastic, and the room just kept opening up to get bigger as we went on.

I give Dark Ops a 10 out of 10. This was one of my favorite activations at SDCC.

Training Field was an awesome anticipation builder and incredibly ambitious for an SDCC activation. While the VR tech was quite touchy and didn’t work as well as it should’ve, the obstacle course itself was insanely fun. To be able to repel out of a helicopter with a giant fan blowing on your simulating the real thing, to crossing a wooden plank and zip-lining onto the ground to jump into a car and “drive” away…it was an experience. My VR headset was a bit rough, and there were plenty of glitches in the video. While this took away from the experience overall, it wasn’t a party killer. The lines were insanely long and it was definitely a hot weekend in San Diego. Once you were inside the activation, there were ice cream and water stations that were themed like a Middle Eastern market.

I give Training Field a 7 out of 10. This could’ve been one of my favorites, but, due to some technical glitches and long wait times it falters a bit. 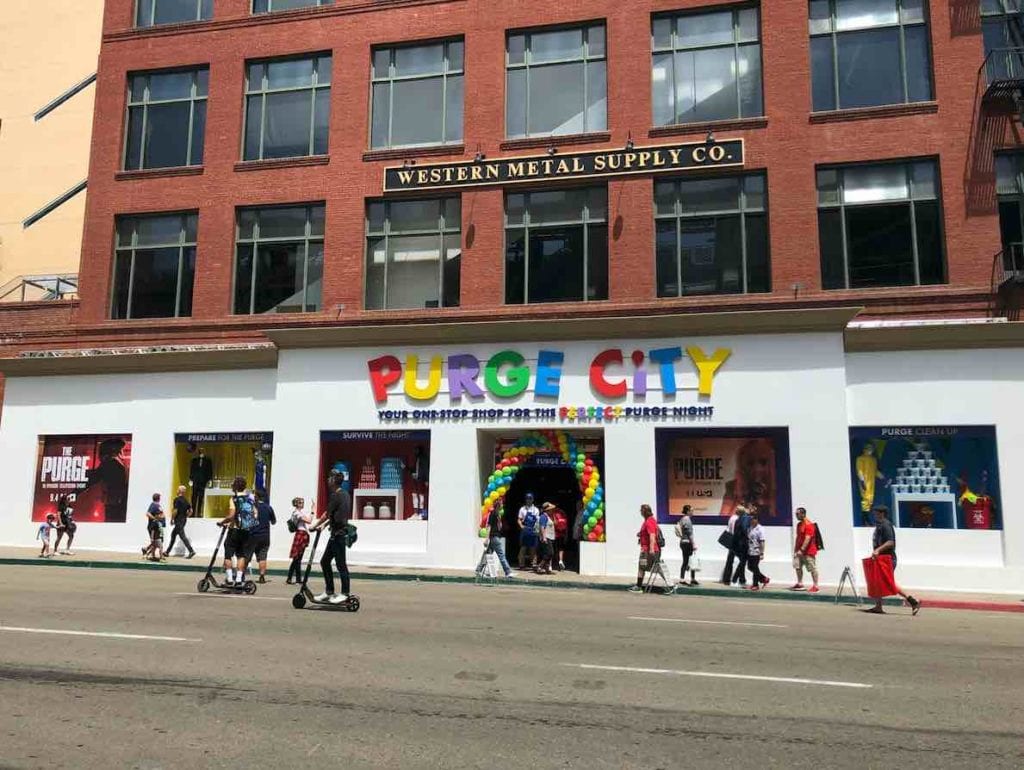 I will start this off by saying: I am not a huge fan of the Purge franchise. I think the ideas behind the films are interesting, but, the films are far too politically focused now. However, I think the world that the filmmakers behind the series have created are extremely well thought out and fascinating. With all of that being said, I am looking forward to the 10 part limited series coming to USA, because, we will get to spend a lot of time with characters leading up to Purge Night and maybe even after it.

At SDCC, USA brought a Party City knockoff to the streets of San Diego with ‘Purge City.’ I had no idea what would be in-store for us when we walked through those doors…but, what we were given was a very campy and tongue in cheek experience that definitely tops my list. Inside, you’re greeted by several very enthusiastic employees who continually ask you how you’ll be spending your Purge Night.

You’re given 20 Purge Dollars to spend in the store on some of the many products they have to offer. There were shirts, hats, candles, blood stain removers, bumper stickers, copies of the 28th Amendment, water bottles and so much more. This store was stocked up with some of the most brilliant pieces of marketing. I chose to go with an airbrushed style shirt that said Live. Laugh. Purge. on it.

There were also mini-demonstrations inside the shop that happened every 30 minutes. I got to witness the cake cutting ceremony, which resembled a king cake cutting ceremony…with a twist. The entire experience was twisted, hysterical and very well put together. For a non-Purge fan, I had an incredible time and will be tuning into the new series on USA.

I give Purge City a 10 out of 10. This was another amazing activation that could’ve been mediocre, but, wound up on my favorites list.

While this specific event wasn’t an offsite activation, it was an incredible experience nonetheless. I’m a huge Dungeons and Dragons nut, so, when I heard that Joe Manganiello was launching his brand new D&D Streetwear brand Death Saves at Bait at SDCC I had to attend!

The entire shop was decorated with amazing Death Saves art and neon signage, and the shirts/jackets were all displayed in an appealing way that made the entire collection easily shop-able. While the line to get in was quite long, they only let in about 10-20 people at a time, so the entire experience felt intimate and each attendee got a chance to meet Joe at the register…since he was ringing everybody up.

This Streetwear brand is definitely one you won’t want to miss out on. The designs are sharp, cool as hell and the quality of the shirts are fantastic. The great news about this brand is that you can purchase shirts RIGHT NOW on death-saves.com.

I will post a separate article with photos and videos of this event. You can also head over to Fan Fest News on Facebook and check out our live video from the event.

I give the Death Saves Launch another 10 out of 10. Beautifully ran, extremely intimate and tons of fun. 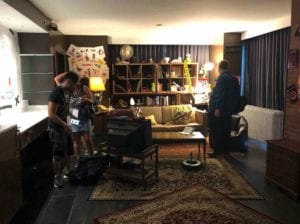 It’s no secret that I’m a massive Deadpool fan. I love the offensive comedy of the films and I’ve been reading the comics for quite some time. When we got the invite to visit the ‘Deadpool Dream Suite’ at the Hard Rock Hotel in promotion of the Deadpool 2 Blu-Ray release, we jumped at the opportunity. While I was hoping for a more elaborate setup and a bit more interactivity, it wound up being pretty underwhelming. There were plenty of fun little easter eggs all over the room, and the idea that Fox created their own ‘set’ inside of a hotel room is impressive. But, I just felt it was lacking in the interactive department…save for a few couches you could sit on. The entire experience took us about 10 minutes to go through and then we were finished. The gift bags given out were fantastic, though. They were little toiletry bags that had unicorns on them…because, why not?

All in all, I’d give the Deadpool Dream Suite a 5 out of 10. It seemed like an additional piece of marketing they added in the mix of an already incredible Deadpool experience scattered around the city of San Diego. The dance party on the convention floor was phenomenal and hysterical. So, while this was underwhelming, Deadpool still was one of the big winners of SDCC 2018. 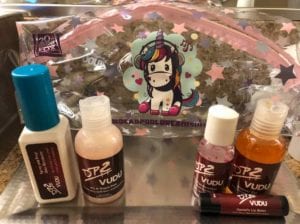 History Channel never disappoints with their on the floor and offsite activations. Their attention to detail is impeccable and they go all out to create the best fan experience possible. This year, History brought ‘Project Blue Book’ to the con. A show about aliens that easily became my most anticipated series of 2018.

For the experience, you walked up to a government facility where you were sat down and asked about your ‘experience’ with a UFO. You could either make it up, or pull from a real experience if you’ve had one. The questions they ask you are identical to what they asked folks during the Project Blue Book period when UFO sightings were an all time high. Once you complete your interview, you are guided by a government official into a room where you hear recreations of actual encounters with drawings on a wall lit up by black-lights. It was a cool effect and very engrossing. After you wrap this room, you are led into a control room where you get to send a message into space. The detail of the final room was unbelievable and really immersed you in the time period. Once you completed the entire experience, you could come back to retrieve a professional sketch of the experience you talked about in your interview at the beginning of the activation. This was SO cool and brilliant marketing on History Channel’s part. Attendees received a custom, one of a kind art piece that they could bring home with them. I can tell you…mine will be framed and put in my office.

I give the Project Blue Book Headquarters a 8 out of 10. While it was immersive and very detailed, it felt very short. Every part of me wished it was a bit longer to really stay in that world. But, we can be in that world soon enough when the show launches this year on History Channel.

This was such a bizarre offsite activation, but, if there’s a fanbase that appreciates the sheer absurdity of Demolition Man…it’s the SDCC crowd. The neon lights, crazy detail, surprisingly good food and awesome merchandise made for a truly fan-driven experience. However, I think Taco Bell bit off more than they could chew with this activation. I think the marketing team underestimated how big this actually would be as the lines to get were out of control. On Saturday night, they had to shut down due to overcapacity and long lines that were causing a lot of congestion on the sidewalks and streets of San Diego. The entire activation was a brilliant idea, but, it was very difficult to get into. While fans come to SDCC for the exclusives and hard to obtain things, this one was a bit wild for an offsite.

I give the Taco Bell Demolition Man Experience a 7 out of 10. The attention to detail was extremely impressive, but, the long lines and lack of preparation for large crowd expectations hurt the score for this one a bit. I hope Taco Bell returns with another crazy activation next year and that they find a way to make it more inclusive to not just SDCC attendees, but, locals who are looking to dive into the fun of SDCC.

While we did miss quite a bit, it’s extremely difficult to hit every experience, because of how much is actually happening around San Diego. I know next year we will hit as many as possible in hopes to bring an even longer list of activations and events that make it worthwhile for SDCC attendees to break away from the convention center and to encourage folks who can’t get a SDCC badge to come to San Diego anyway…because, all of these offsite activations are open to the public!

Look out for our trailer/clip highlight coming up next!