Kyle Hughes is an up-and-coming LA-based pop artist who has been making waves in the pop scene for quite some time now. With just one EP released, she’s already coined her own genre…CALIPOPICANA.

With the release of her brand new music video for her single, ‘Never Ever’ having just released; I had the opportunity to sit down for a quick Skype session with Kylie to discuss her music, influences and a few fun things.

NICK: In 2014, you released your debut EP, Calipopicana, which brought on a 1950’s pop vibe with many other influences scattered amongst vocal melodies and song structures. I’m curious; what bands have influenced this unique musical style the most throughout your life?

KYLIE: It was funny, like, after I released it somebody quoted the album saying “it’s Kylie’s love letter to California,” and, I thought that was such a nice thing to say. Also, it captured everything I wanted to do. Because, when I was growing up, I was listening to a lot of Beach Boys and Dad’s playlist. Those kind of bands and anything kind of beach-y influenced that. I just wanted to put together a project with that kind of focus. I wrote with tunnel-vision (as most people say) as to what “Calipopicana” sounds like. I feel like I put a lot of California pop and americana on it. But, it’s been a while since I’ve been writing with that same mindset.

NICK: Did you know that when you’d release your EP, ‘Calipopicana,’ that you’d be creating a brand new genre of music along with it?

KYLIE: Yeah, I did a little bit. I graduated college with an advertising degree. So, I thought: “how am I going to stand out or be different from every other girl with a guitar?” And so, I was like, I’m gonna make my own genre that I happen to be number one in. I just wanted the chance to brand an album, and I feel I did that with the songs and album artwork (for Calipopicana). So, yeah, I knew what I was doing and it was on purpose.

NICK: *laughing* That’s brilliant. Because, there’s really no chart in the genre you created. So, essentially you’d be number one at the top of that chart every week.

NICK: Let’s talk about your latest single, ‘Never Ever.’ The unique pop style is still present; but, this time you’re exploring a more theatrical side of the musical realm. When writing ‘Never Ever,’ did you draw inspiration from films or musicals you love?

KYLIE: I think what makes this one so different and everything I’m going to do different from Calipopicana is the overall production of it. It’s different instruments. It’s a different feeling. When I was writing it, it was actually the second song I’ve ever written on the piano. It was just the three chords I knew. But, I had a co-writer come in and add more to it.

I think what really made that one feel more theatrical, is that we decided to put strings on it. We recorded with this orchestra in Ireland. It’s totally different. So, once you add that theatrical style strings can do, when I was envisioning the video, I was like this just has to be wandering around the woods in a wedding dress and it has to be super dramatic.

When I was working with my director,  I told him my idea and he was like: “Uh, sure, yeah. Is that your dream?” I was like: “Yeah. I just want to tear apart a wedding dress and jump in a lake. I want to be dark and moody.” It was really fun to do!

NICK: While we’re on the subject, what are some of your favorite films of all time?

KYLIE: Oh gosh. For a while I loved the Pirates of the Caribbean movies. For one of my birthdays, we rented out a movie theatre to see the second one when it came out (the second isn’t even my favorite one). I’m kind of a nerd; I love all of the Stars Wars and Lord of the Rings movies. But, I also love a good rom-com. Nacho Libre is probably the movie that I quote the most. If anyone can banter Nacho Libre with me, they’re cool.

NICK: You worked with director, Jamie Yukich on your video for ‘Never Ever.’ There’s this extremely cinematic, fantasy/fairy-tale feel throughout the whole entire video. This must’ve been an absolute blast to be a part of; can you tell me about some of your fondest memories on set?

KYLIE: Jamie Yukich is the son of award winning director Jim Yukich (who directed my video for ‘Calipopicana‘). I met Jamie on set of the Calipopicana shoot, and he was like, “I love what you’re doing. By the way, I direct too.” And, I was like, “Oh cool! We should do something.” It’s like he was stealing work from his Dad. *laughs* So, we did my video for “It Still Hurts,” which was sort of like a run through to see how we work together.

Doing the “Never Ever” video wound up being one of the most fun shoots. It was a two-day shoot and we were all staying on location. It was one of those kind of shoots where I had to be up before the sun was up; because, we shot a lot of it outside when the sun was coming up and the sun was going down. So, I had to be in hair and makeup at 4:30am to get down to this lake where there is this fog layer that burns up when the sun rises. It was a lot of really long hours and crew bonding.

Our DP is a guy named Mario, and we did some shooting in a pool. They told us the pool was going to be warmed up. It was February, and in California which is freezing (believe it or not). The ground will freeze over. So, we get in this pool, and the first layer was warm; but, the second you get down to your knee it’s ice cold. But, I knew we needed the shot, so, I got in with the dress on and Mario got in with board shorts.

I had to swim down to the bottom of the pool. I’m a diver and a swimmer, so I’m very comfortable in the water and good at holding my breath. But, the second you get down to the bottom of this pool, it knocks the wind out of you with how cold it is. So, that was pretty memorable. They had shots of tequila waiting for us before I got in and when I got out.

NICK: *laughs* Best way to warm yourself up is a shot of tequila.

NICK: So, you’re at the point in your career where you’re transitioning from EP to LP; can you give us a little sneak peek into the life of Kylie Hughes as you prepare, write and record you’re forthcoming record?

KYLIE: Right now, I’m working with three different producer/writers. I kind of just rotate and do a couple songs here and there; then I take a while picking the best of the best. I have been writing and recording material since 2014 when the ‘Calipopicana‘ EP released. That was a choice between 6 or 7 songs to narrow down to 6. Now, I have almost 3 years worth of material where now I have to cut down to maybe 8 songs. I’ve been releasing the singles to see what hits and what people connect with.

I have another single coming out before the end of year (and hopefully another after that). And then I will just be narrowing it down. Trimming the fat!

KYLIE: I have a couple other shows for those of you in the LA area. I’m playing Labor Day at the Rocky Top Fest and you have take a chairlift up a mountain; which I’m super excited about. I will literally be playing on top of a mountain.

Other than that, I will be working on these songs, singles and I have another video coming out soon that just wrapped production. So, we are just waiting for the right time and place to release that.

NICK: Awesome! So much exciting stuff. Now, for a little bit of fun. Some of these questions might be more challenging than others-

KYLIE: NACHO LIBRE. If I can answer every question with a Nacho Libre quote, that’d be awesome.

NICK: *laughs* That would incredible. Alright, first question: If you had to pick one decade to live in, what would it be?

KYLIE: The 60’s, mostly just for the fashion. I dig the outfits, the clothes, the hair, the cars, the decor and I’m really into decorating. *shows off large beach-y painting behind her* You like my….paintings? (in the voice of Nacho Libre) 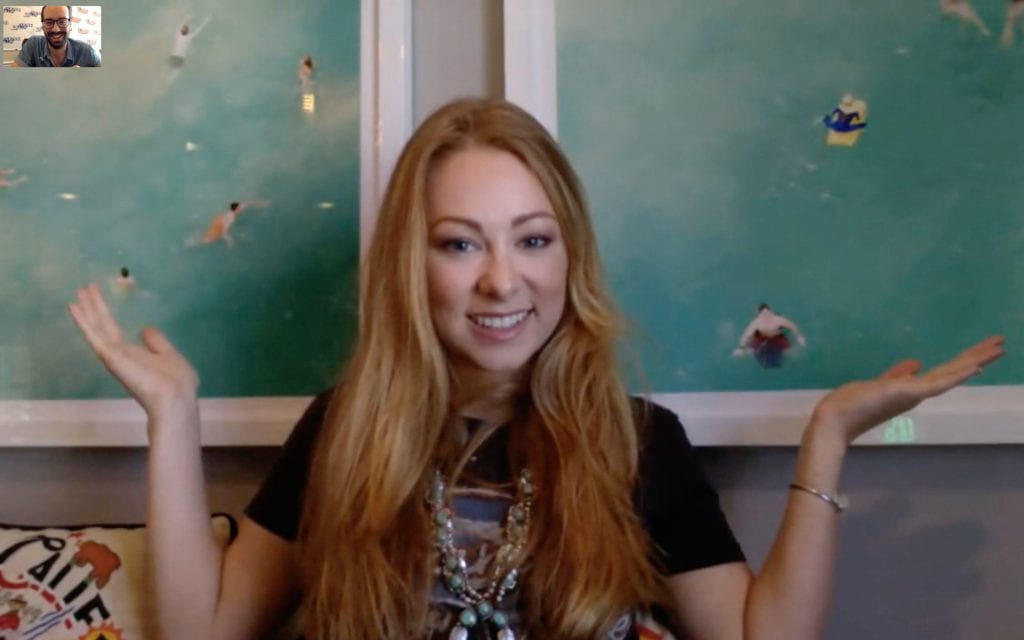 KYLIE: It’s actually this aerial shot by Gray Malin of a beach in Australia which is known for sharks. And, I kind of look at this thing and go “is that a shark?” Actually, on the top right corner, there’s this blur where I’m like: “THAT IS A SHARK. YOU’RE GONNA GET EATEN. THIS IS THE LAST PHOTO OF THESE PEOPLE.”

NICK: That’s a twisted piece of photography; because, you know something they don’t know.

KYLIE: I’m sitting at my dining room table right now, so, it’s good dinner discussion. “Did they or did they not get eaten by a shark?”

NICK: How often is that conversation?

KYLIE: More than you would think…EVERYDAY.

KYLIE: I’m pretty into the Elle King album. I’ve also been listening to the Suicide Squad soundtrack and I can get down with some of that. Also, I’ve been listening to Grimes…which is completely opposite of my genre. I like her weird brain!

KYLIE: Anything Michelle Branch. As far as actual karaoke goes, I’m not a big karaoke person. Because, if anyone knows you actually sing and they take you to karaoke they’re like: ‘SING,’ and expect you to be amazing.

My go-to is Kanye West’s ‘Golddigger’ or Shaggy. Ariana Grande’s ‘Dangerous Woman.’ I can get down to that one.

NICK: Woah! That’s a tough one.

KYLIE: Is it? Have you tried? Is that you’re car jam?

KYLIE: Oh! Adele’s ‘Send My Love To Your New Lover.’ That’s probably my favorite song that Adele has ever done. Yeah, I said it.

NICK: Oh man! There’s going to be some controversy.

KYLIE: I love it, because, I almost didn’t know it was Adele. And, that’s what I love. I don’t know. Please don’t hate me, internet.

NICK: So, I think our readers have enough to look forward to after such an epic video and a tease at what’s to come.

I think it’s safe to say, you left ‘em wanting more. I’m sorry, I had to throw in one of your song titles as a reference.

KYLIE: That used to be the song I closed my set with. “Alright guys, here’s my last song called: “Leave Em Wanting More,” wink, wink.

I now close with a new song that you’ll probably hear in the future called “You Gotta Get Outta Here.” So, that’s also a good one. Like: “I’m gonna close this set, but, you gotta get outta here after this song.”

NICK: Thanks so much for taking time with me today, Kylie! Now I’m gonna get outta here. Best of luck with everything.

Also, be sure to check out her latest music video for ‘Never Ever.’