With Walker Stalker Con London just wrapping up, we had the chance to chat with Josh McDermitt about that last episode of The Walking Dead, the whole “Eugene Brings the Sex” trending topic, and we even asked about Twin Peaks – though Josh has been sworn to secrecy (we tried!).

Emma: Let’s talk “Eugene Brings the Sex.” Tell me about the evolution of this.

Josh: When I was doing the Talking Dead and they had the cliff for the next episode, it had Michonne and Rick scavenging for stuff and making love throughout the clip, and I was like why aren’t they out looking for Eugene? I got my feelings hurt, and I was pissed. And they were like, “Well what do you expect them to do? They just need to make love.” And I was like, “I get it. Maybe they were looking for him, and Eugene brings the sex.” I don’t even know if that statement makes any sense, but I said it on Talking Dead, we laughed, and Chris [Hardwick] said that has to be on a t-shirt. Next thing I know, he calls me up and says, “Let’s put that on a t-shirt.” So we did, and now we’re selling it at RespectTheMullet.com.

I’ve seen a lot of people this weekend that have made their own shirts that say it. It’s funny, for all the times you can calculate and say something that you think will catch on, and it doesn’t. And then you say something that makes zero sense, and people are like, “I get it.”

Emma: Let’s talk about your “science experiment” in the last episode. Was that the most scared you’ve been on set?

Josh: Probably. We were exploding these hydrogen balloons, and I was supposed to hold the candle up next to the balloon, and it didn’t explode right away – because I held it a little too far. It ended up creating this little pin-sized whole in the balloon, so the hydrogen was leaking out like a blow torch. It burned the string it was on – and it started flying around and almost landed on me – I was freaking out. Everyone was laughing, and I was like, “No. I have to protect the mullet.” That’s number one, and I’ve learned that any time something goes wrong when you’re doing a special effect like that – don’t stick around and assume it’s going to be okay.

We did a special effect in season 5 where the bus flipped over and caught on fire. They ran all these gas lines through the bus, and it was a controlled burn. And apparently something happened, and the whole bus went up in flames really quickly – we could basically only get that in one take. It was really hard, because the bus is on fire behind me, so my back feels like it’s on fire because it’s so hot – and I’m having to keep a straight face and have this talk with Abraham. The other thing is – we shot it without the bus on fire and everyone is talking normally. We assumed it was going to be a small flame, but then it’s this huge giant fireball… I was trying to match the tone that we had before. If you go back and watch that clip, Lauren Cohan is in that and she’s bumping into me saying stuff like, “Hurry, we gotta get out of here.” She was afraid the whole thing was going to go. It’s funny, because everyone is focused on me watching that – but if you look at Lauren – she’s like freaking out. 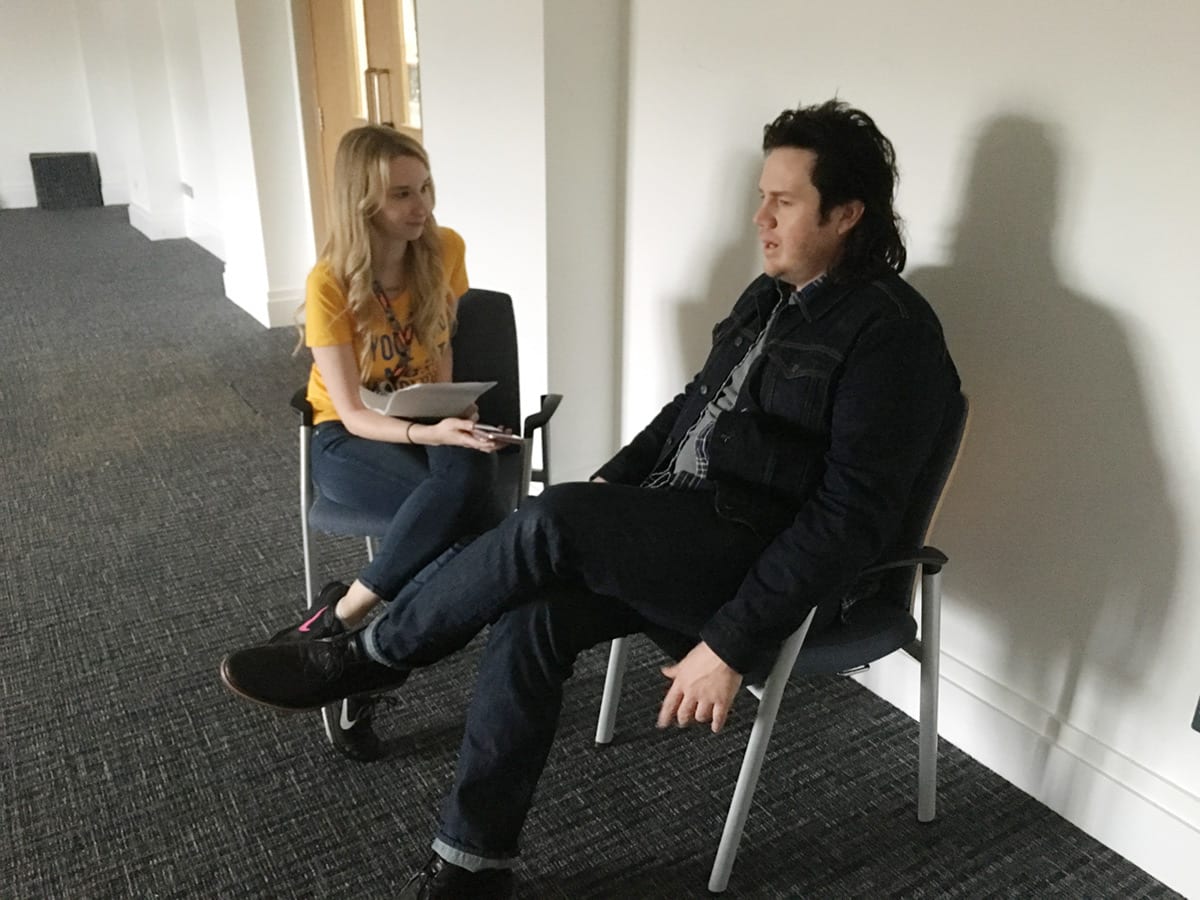 Emma: How is being around Negan’s group going to change Eugene? Will it have an impact on his motivation? Or will it change him?

Josh: Well his motivation always has been, and always will be, to just survive. He’s kind of a selfish guy. He’ll look out for others, as long as he’s protected first. I think a lot of people would be like that in the apocalypse. Now that he’s with Negan’s crew and he’s pledged his allegiance there, that certainly isn’t going to change – why not align yourself with the apex crew, and go from there.

A lot of people have asked me if this is a rouge, or is he sandbagging it or Trojan-horsing it? I don’t know, I’m not going to ask. As far as I’m concerned he’s Negan, and he could do some bad things if asked. That’s just where we stand, and I kinda like that. I just don’t think there’s any “Living on Easy Street.” A lot of his choices are going to come back, and he’s going to be faced with them.

Emma: What can you tell me about Twin Peaks?

Josh: I can’t say anything. They’re even more secretive than The Walking Dead. They released a cast list of everyone involved, and there’s a bunch of people on there I know – and even we don’t talk about it with each other. It was that secretive. And to be honest, it’s not like I have a lot of information – I did it, and I still don’t know what was really going on. They kept a lot of stuff from us. It was really cool to be apart of though, I’m happy with it.

Emma: Were you a fan of the original?

Josh: I remember my parents were really into it, and I would hear adults talking about it. I think I might have been too young. I was like 11 or 12 when it came out, so I didn’t get it. But I love David Lynch. So I went back and started watching it before I was offered the job and I stopped because I just didn’t have the time. But people are going nuts about it. It’s going to be cool.

How do you think beginning at Negan’s camp is going to affect Eugene? Are you excited for Twin Peaks? Let us know your thoughts below!