With Walker Stalker Con Atlanta taking place the weekend following the season 7 premiere of The Walking Dead, the episode was still weighing heavy on our hearts. We had the opportunity to speak with Ross Marquand (Aaron) and Jordan Woods-Robinson (Eric) about what the vibe has been like on set, how our core group of characters will recover, and what their favorite memories from working with Steven Yeun and Michael Cudlitz.

Emma: What has the vibe been like on set since the filming of the premiere episode?

Ross: The vibe on set has been bittersweet, because obviously I think we are proud of the way it turned out. I think the episode looks greats. All the elements were there. The writing, the editing, the crew busted their ass like you wouldn’t believe during that episode. And the acting was there. I feel like everyone just really gave their all.

They left it all out there on the forest floor. The unfortunate side of it, of course, the bittersweet side of it, is that we lost two of our most beloved characters and also friends of ours. They’re the guys that set the tone on the set. They’re the guys that always are the most professional, most friendly. They set a good vibe. They set a good tone. To not have them on set, it’s tough. It’s very tough.

Jordan: I wasn’t in the first episode. I wasn’t on set for that, but I could just get a sense that, yeah, it’s taut. I went into the episode wanting to love to hate Negan, which I do in the comics, I love to hate him. And be like, aw, he’s such a bad guy, but man, he’s so cool! After that episode, I said, I do not want to have anything to do with this character.

But that, again, that’s pride of everyone’s storytelling in that. That’s a huge testament to how everyone came together to not only tell their story, but to tell their story in such a way that when the episode is over, we hate this guy. Everyone is unified in hating this guy. That’s a unified vision from everyone across the board to make that happen. 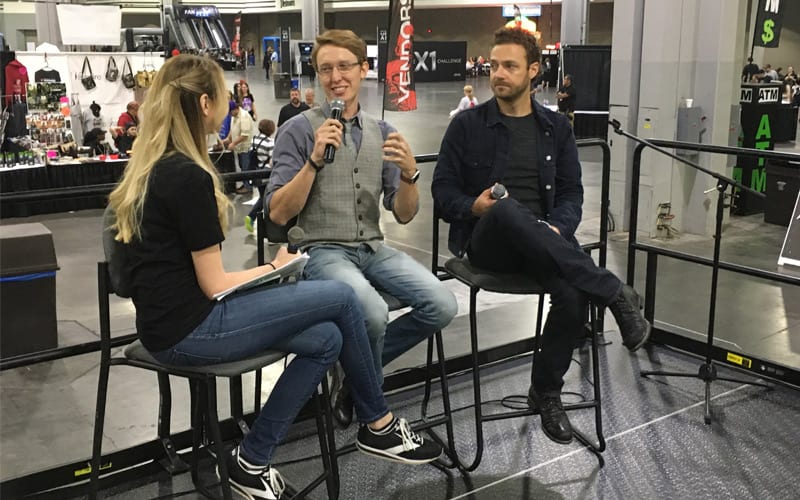 Emma: How will this affect our core group of characters moving forward? I imagine the effects will be felt for probably a good portion of this season.

Ross: Yeah, I mean. Immediately after the attack, there’s going to be a great sense of rebuilding in whatever way they can. I talked to my mom about this the other night and she said, “I just feel like there’s no hope left for the group.” While I can certainly see her point based on what you saw in that premiere, I think there will still be hope. Even in Maggie’s last lines of the episode when she’s saying we have to go fight…

Jordan: That was beautiful. I’m so glad they extended it, like five minutes or something, right?

Jordan: And just that five minutes was, I felt, what we needed to be like, okay, we can still rebuild this. We can still get through this.

Ross: Because I think the fans were feeling that way too. It’s just like, we just were emotionally destroyed by the end of this episode and where do you go from here? How can you possibly rebuild after seeing that?

Jordan: The only place you can go up!

Emma: What’s your favorite memory from working with Steven Yeun and Michael Cudlitz?

Jordan: It really just comes down to the personal stuff for me. Just being on set and Steven and I watching funny karate YouTube videos together, you know? And him just being so excited about how funny that one little kid is while he’s doing his karate, you know?

And talking to Michael about his family and his kids and being so proud of his kids going off to college. It really just comes down to the personal stuff of friends talking to each other and being there for each other and just hanging out and in between takes, everyone … I think lots of people mellow out a little between takes, try to break some of the tension. Because its a super tense show.

Sometimes if someone needs to stay in it, then we’ll give them some space and let them do their thing. For the rest of the time, it’s just great. So let’s get back to us for a little while before we have to go back to that again, you know?

Ross: And they’re the funniest guys, too. I mean, Steven has background in improv and comedy. Cudlitz is just naturally very, very funny. Probably, between he and Josh, the two guys that made me laugh most on the set. No offense (to Jordan), you’re lovely too.

Jordan: I’m not funny at all. (laughing) It’s fine.

This is why we do this. It’s the camaraderie of all this. We miss them, like crazy. We do.

And we do too! Do you have a favorite memory of meeting Steven Yeun or Michael Cudlitz? Or a favorite moment from the series? We’d love to hear from you in our comment section below!

Be sure to catch an all new episode of The Walking Dead this Sunday night on AMC!