When most people think about going to major conventions, they think about media panels and what actors/ actresses will be signing autographs. Very rarely is there an emphasis placed on the artists who attend. Maybe they’re lost in a maze of booths or set up in a completely different part of the convention hall.

So imagine my surprise this past weekend when one of the largest and most impressive booths at Heroes & Villains Fan Fest belonged to an artist. Then again, considering the artist in question was Rob Prior, maybe I shouldn’t have been so surprised.

From storyboarding to promotional images and everything in between, Rob Prior is an immensely talented artist with over 30 years in the business. Though it isn’t just his resume that’s impressive, but rather his style – or lack thereof – that is truly a sight to behold. Between the blasting music and seeing him duel-wield paintbrushes, watching Rob work is just as incredible as the final product itself.

What follows is my interview with him on how he began his new style of painting, tips for aspiring artists and why all of his paintings have a chicken head hidden in them:

FanFest: “How would you personally describe your style?”

Rob: “…. Messy? You know its funny I get asked that and I really have been trying to think about it and it’s… not caring. It really is. I used to be a photo realist for magazines and book covers and stuff and it was always this meticuolous photorealistic thing and I was getting burnt out about six years ago. I told my wife, I cant do this anymore’, and she said well why don’t you paint like you do in your studio? And im like huh, nobody wants to see that! Nobody wants to see that. But she convinced me and I haven’t gone back. And how I paint here is how I paint.” 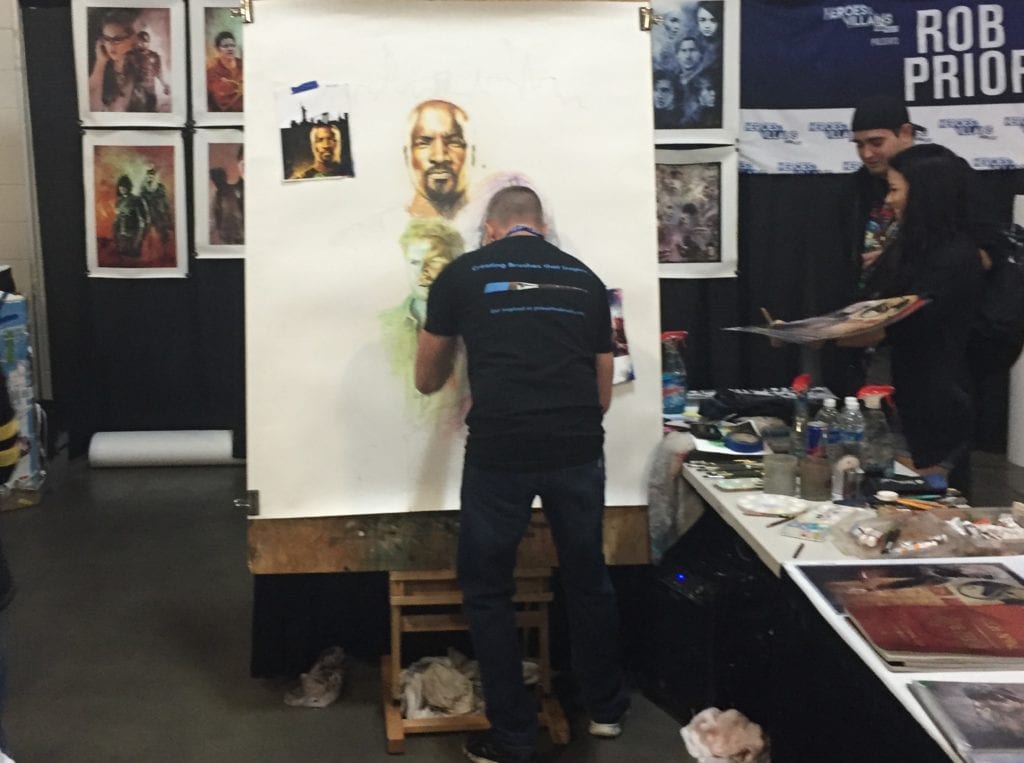 Fan Fest: “So does the music help inspire you or just to distract the subconscious?”

Rob: “Dude, I drown the subconscious mind OUT! Like in my studio, you walk in and you’re like ‘Gah, turn it down!’ Yah, it’s just so loud because, you have to. Your subconscious mind will just distract you endlessly if you let it… The music changes everything. If I don’t have music, I cant paint. So yah, I have to have music.”

Fan Fest: “Do you have a set pattern or way of making your pieces?”

Rob: “Well I start with watercolor pencil and then I go to paint; though sometimes I do and sometimes I don’t. Every single time I try to make it different and change it. You know because change is what it’s all about. I’ve seen a lot of artists and I know a lot of artists who stick with the same style, same thing for their whole life and I think that’s like the death of an artist. You got to be able to adapt and move and do different things. But that’s just my own personal belief.”

Fan Fest: “I couldn’t help but notice most – if not all – of your pictures have a chicken head hidden somewhere in them. Is there a story behind that?”

Rob: “There is! There was this publisher – who I won’t name at the moment – that hired me to do a 3 book series. And he called me up and said, ‘Rob, I really want to hire you to do this, would you do it?’ and I was like sure! ‘But listen, if you hide anything – because I know you hide things – I’m going to fire you.’ And I was like “dude, what would I do? Hide a chicken head on every page?” …. So I did. In fact, I got so bold with it, I did a double splash page where if you turn the entire book on its side, it looks like a giant chicken head. Third issue, before I got paid, he called me up at 3 in the morning, woke me up and went ‘Yah, I’d fire you right now but I’m too busy looking for chicken heads…’

Had I known a chicken head would stick with my fans, I would have picked something WAY cooler than a chicken head. Come on! And I tried to switch it, I tried a moose once but I got such backlash! So I’m like ‘alright, I’m the chicken head guy…’.” 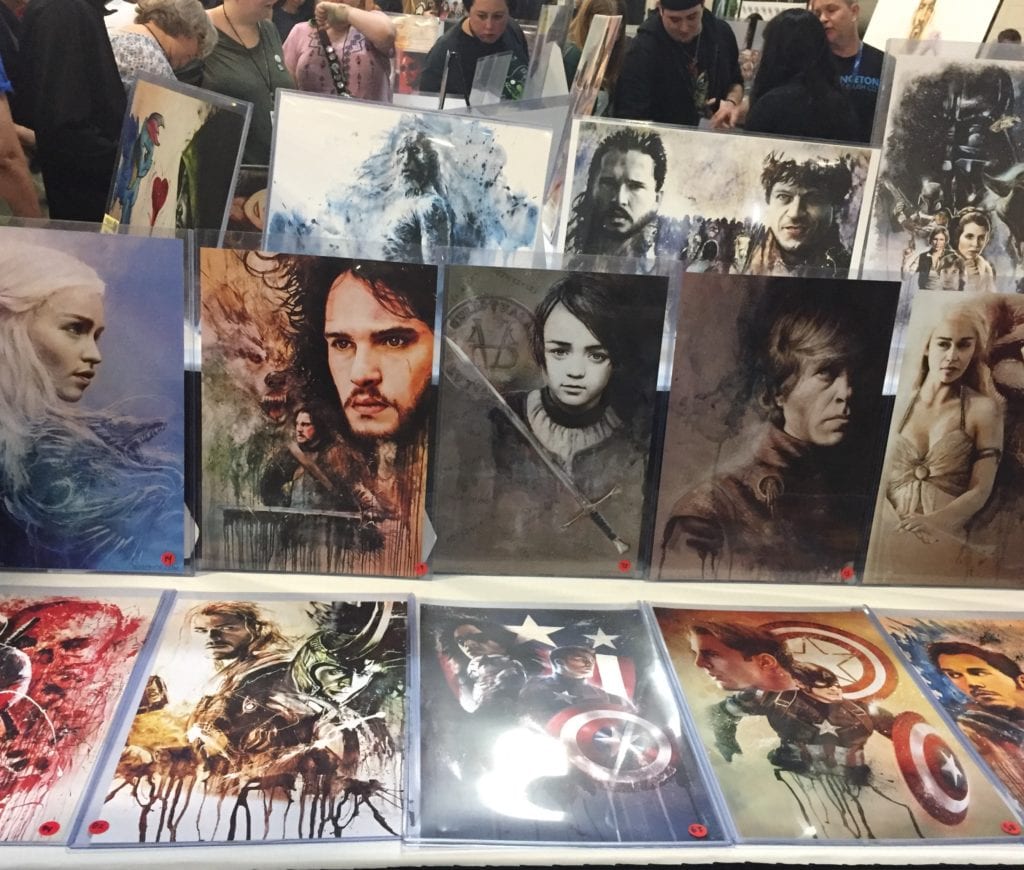 Fan Fest: “If you can give one tip to any artist starting out, what would it be?”

Though there’s only so much you can learn about someone by interviewing them. The rest you have to observe for yourself; and watching Rob not only paint but also interact with his fans and friend was the most memorable part of this entire interaction. Setting up this interview was not easy – special thanks to his amazing assistant and team! When this man starts painting, he is laser focused while  still feeling the music. And when he’s not painting, he’s making time for everyone around him.

So if you ever have a chance to see Rob’s work in person, be sure to set aside some time to watch and meet this incredible artist! His on the fly technique and personable nature is something all artists should drive to develop their own version of. So to all my readers who have some artistic side to them, don’t give up and keep improving. And who knows, maybe one day you can hide animals in your work too!