If you are out and about in Atlanta, Ga this time next month, go check out the Shaky Knees Music Festival! The line up this year is stellar. There are famous bands like The Pixies and the super-talented Ryan Admas, as well as Saint Motel, Cage the Elephant, The xx and Phoenix. You can also check out some up in coming bands like Foreign Air (one of my favorite new bands).

The fifth annual Shaky Knees Music Festival will take place at Centennial Olympic Park in downtown Atlanta over three days, May 12-14. The festival’s daily lineup for over 60 bands & solo artists performing across three main stages is listed below. 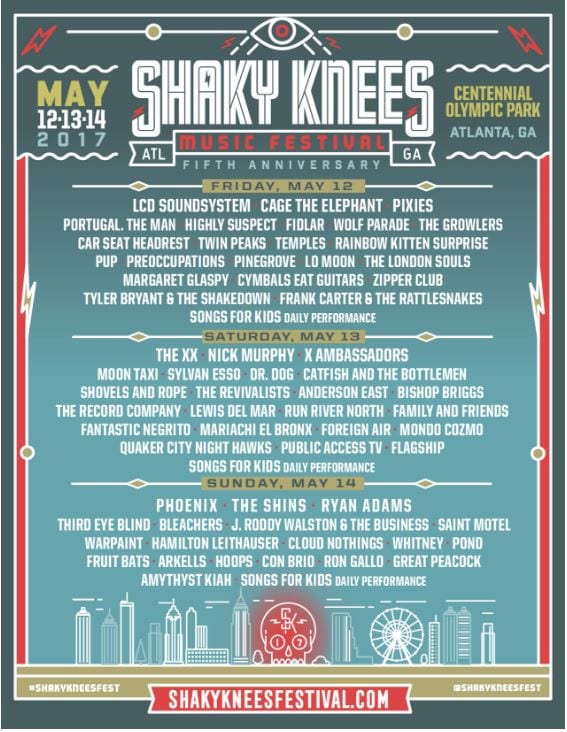 Shaky Knees was started as a rock/alternative music festival by Tim Sweetwood in 2013. He launched it as a festival focused purely on music, unlike the huge festivals like the Coachella Valley Music and Arts Festival and Bonaroo Music & Arts Festival, which has attractions other than musical acts. He also created Shaky Beatz that features EDM music and Shaky Boots which is solely made up of country artists.

If you are looking for a music festival that is a little smaller than the Bonaroo and you can’t make it to Coachella, then Shaky Knees is the one is for you! Tickets are available now and range from single and three day passes. Stay tuned to Fan Fest for more coverage of this awesome music fest.