If you’re looking for a hidden gem on Netflix, you will most certainly find a winner in their reimagining of Norman Lear’s classic One Day at a Time. The Netflix original, which follows a Cuban-American family living in Echo Park, Los Angeles, is a comedy like no other. The hit series, which has co-showrunners Gloria Calderon Kellett and Mike Royce at the helm, isn’t shy when it comes to dishing out laughs, and exploring the more difficult topics society faces, such as racism, substance abuse, depression, gun control, LGBTQ issues, and so much more. In my personal opinion, this new and improved version of One Day at a Time was built to last, and has expertly woven both comedy and drama into their 25 – 30 minute installments. If you ask me, 13 episodes each season is hardly enough to satiate our appetites when it comes to consuming this empathetic powerhouse of a series.

One Day at a Time follows the trials and tribulations of Penelope Alvarez (Justina Machado), a veteran raising her family in a scruffy Eastside neighborhood. It not only tackles the ups and downs of Machado’s character, but tells of the everyday struggles faced by the colorful Alvarez family. From Elena’s (Isabella Gomez) realistic journey of self-discovery, to Penelope’s mother Lydia (Rita Moreno) grappling with ditching her Cuban roots to finally embrace America as her home, One Day at a Time is the show we never knew we needed. 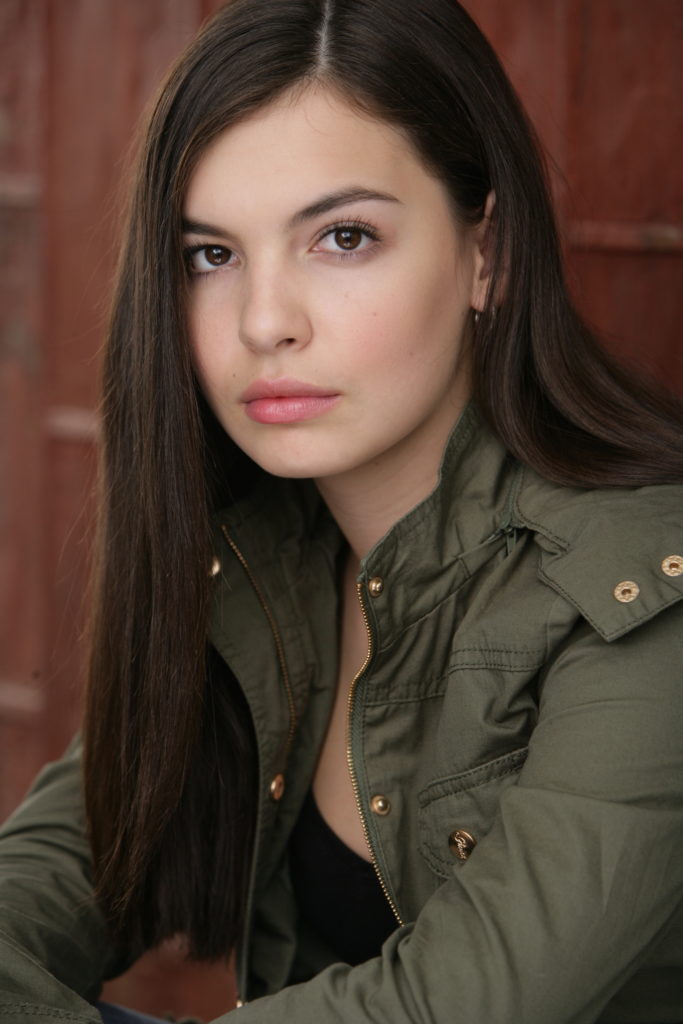 Season 2 premiered Jan. 26 on Netflix, and if you haven’t had a chance to tune in– there’s always time to binge-watch the hilarious and heartwarming sitcom. Isabella Gomez, who has skyrocketed to fame thanks to her breakout role of Elena Alvarez, an empowered teen determined to make her mark on the world, illuminates the small screen with her subtle comedy and pragmatic approach to politics and topical issues. It’s rare that you see a Latinx LGBTQ character represented in the media, so Gomez’s ‘Elena’ was a surprising, yet long-awaited addition to TV.

Gomez had a lot to say when it came to working on One Day at a Time, as well as her own journey playing such a pivotal role. From her portrayal on screen, she has undoubtedly educated many misinformed members of the audience and hopes they too can see the humanity in the show. From working with One Day at a Time alum Mackenzie Phillips, to accurately depicting an LGBTQ community, Gomez eloquently discusses the shows reach and its relevance in 2018.

MCKENZIE MORRELL: For those who might not have seen One Day at a Time yet, can you tell them a little bit about the show, and the character you play?

ISABELLA GOMEZ: One Day at a Time follows a cuban american family through their everyday lives. We see them deal with and be affected by all sorts of current topics such as love, racism, depression, PTSD, gun control, LGBTQ issues, politics and so on. All of this is discussed through  a comedic lens. My character, Elena Alvarez, is the oldest of the Alvarez kids. She’s an empowered, passionate, cultured young lady trying to find her place in the world all while making it a better place. During Season 1 she explores her sexuality and what that means in a Latinx, Catholic environment. She grows a lot from that experience and in Season 2 we see her be even more sure of herself, but also get to watch her navigate through the regular teen life.

MM: Were there any defining moments or characteristics that you were able to really relate to while playing Elena?

IG: Elena and I are both very passionate and stubborn when it comes to things we really believe in, so I identified a lot with her spirit.

MM: I stumbled on this series one day when I was sick in bed, and figured– why not! A day and a half later and I had binge-watched both seasons, and was jonesing for more. What do you think gives ODAAT that ‘it’ factor?

IG: I think ODAAT gets it’s “it” factor from every single aspect of the production, which is what makes it so special. Everyone involved truly loves their craft and is dedicated to telling the story of this family as truthfully as we can. Of course, it all starts with our incredible show runners, Gloria Calderon Kellett and Mike Royce, and writers. Our age range in the writers room spans from 24 to 95 when Mr. Norman Lear is there, its half women, half Latinx, and there’s LGBTQ.  All the stories from the show are inspired by real stories that real people have lived through. This makes it so that when people see the Alvarez’s they can relate to at least one of them. There’s something for everyone in our show and it all stems from a place of vulnerability and honesty.

MM: I’m sure everyone asks you about the sense of responsibility you must feel when portraying a gay character on TV. Obviously, you want to do well representing the LGBTQ community, but what’s something you hope viewers take away from watching Elena’s story unravel before their eyes?

IG: I hope people walk away seeing the humanity in the story and having that experience normalized a little more in their minds. At the end of the day, Elena is just a kid that has to learn how to flirt and doesn’t know what to do around her crush and wants to find someone to share her time with. Most of us can relate to that, no matter what gender we like.

MM: I don’t think there are many shows that successfully deal with queer life, or dating as a teenager. How important do you think it was to portray Elena’s dating life and the struggles she faced during this transitional period of re-discovering herself?

IG: I think showing that on TV is crucial. Absolutely necessary. Representation really does matter, so having this story told accurately on a platform like Netflix that reaches the entire world, means that thousands of people are seeing themselves in the media for the first time. They now feel seen, they feel validated, they feel like they’re not alone. They have someone to look up to who shows them that it’s going to be rough, but it’s also going to be okay.

MM: Have you received a lot of fan mail or feedback regarding Elena’s coming out story? How are you adapting to all of the attention, especially since representation in the media is so scarce, even in 2018.

IG: I have been very lucky to receive a ton of positive feedback regarding Elena and her coming out story. It’s something I’m incredibly fortunate to be a part of. Being the vessel for this representation means a lot of people are extraordinarily vulnerable with me. I couldn’t tell you how many coming out stories I’ve been able to read about and how many people, ranging from kids to adults, tell me that although they’re still in the closet, they now feel better about their situations and are working towards living their most authentic lives. It’s so humbling to read all this feedback and get to be a little part of their journeys.

MM: There were many different reactions within the family on screen to Elena’s coming out, whose reaction do you think shocked you the most when you read the script?

IG: Obviously Elena knew that Victor was going to be the least accepting in the family, but I had no idea he was going to walk out on her. I remember Gloria told me about the plot line for the Season 1 finale while we were at an after party and I started crying right there. And then I cried when I read the script and at every table read and rehearsals and through the whole filming day. It wasn’t just shock either, it was outrage and pain and betrayal. I’ve become very protective of Elena and the LGBTQ community so living through a little bit of the experience that is the everyday reality for many of them was absolutely heartbreaking.

MM: ODAAT does a great job of mixing light with the dark. The show has its funny moments, but also touches on real, daunting issues– such as sexuality, depression, and immigration. Do you think that the show will open people’s eyes to these topics, and hopefully educate those who are severely misinformed?

IG: Absolutely! That is what we’re hoping to achieve! Our fearless boss Norman Lear has been doing just that for decades and decades. He ended up on Nixon’s enemy list because he dared to talk about taboo subjects on TV and was actually changing people’s minds. At the end of the day, we never want to be preachy and we trust that our audience can form their own opinions. We just give them information and different points of view on important topics so they can make those opinions in a more informed manner.

MM: This show is a reimagining of One Day at at Time that ran from 1975 – 1984. When you got the role, did you do any research by watching any of the old episodes?

IG: I watched a few clips on YouTube, but I didn’t want to end up trying to imitate it or being stuck in the wrong vision of the show so I didn’t watch a lot. I did do more research on Norman, the show runners and the cast so I could get a feel for the energy and creative direction that would be on our set.

MM: The original ODDAT starred Mackenzie Phillips, who makes several appearances throughout the show as the leader of Penelope’s veterans support group. At any point did you get to chat with her to see what she thought of the new, more modernized version of the series

IG: Oh, if Mackenzie Phillips is on set you can find me right next to her. The poor woman, I am constantly talking to her when she comes to work. She absolutely loves the show! I think it must feel like home to her. Norman is still there and Patricia Fass Palmer, who also worked on the original show, is there too. We also all adore her and she loves being a part of it. We’re very lucky to have her approval and incredible talent with us.

MM: I like to throw in my signature question, if you had to construct a donut based on Elena’s personality, what kind of donut would it be and what kind of toppings would be on it?

IG: Man, this is tough! I think she’d be something out of the ordinary, like maybe a cinnamon base? Strong though, cause she packs a punch. Chocolate covered and with a bit of crushed Cheetos puffs on top.

MM: To wrap up, what’s one piece of advice or words of encouragement you’d give your fans?

IG: To my fans: If anything, I think you guys should be giving me advice and words of encouragement. I’ve never encountered such an overwhelmingly positive and supportive group of people. Please, please, please keep being the bright lights you already are. Keep loving hard and fighting for what’s right. If the world could feel a fraction of the happiness you all have made me feel then I truly believe the human race would become better. And I know you are all capable of making that difference. Keep fighting, my loves.

Season 1 & 2 of One Day at a Time Now Streaming

Home » Featured » EXCLUSIVE: ‘One Day at a Time’ Star Isabella Gomez Talks Breakout Role and Representation in the Media