Former CNN anchor Felicia Taylor was arrested for a hit-and-run in Palm Beach, Florida. According to Page Six, Palm Beach Police say that on July 28 she allegedly hit another car and then left the scene. Taylor denied the allegations and pleaded not guilty.

Taylor was driving her white Mercedes when she hit the back bumper of a black Ford driven by a man who is 24 years old. The man’s car was stopped in traffic in front of her Mercedes. “The impact caused him to hit the steering wheel, causing multiple complaints of injuries,” the report reads. 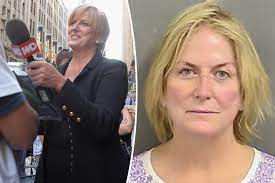 After the accident, Taylor was allegedly seen leaving the scene without helping the driver or exchanging information. Taylor was seen driving around the scene of the crash twice. Even though her own car was damaged, she drove by the scene again. She continued driving until a police officer pulled her over.

“Taylor acknowledged being involved in a traffic crash and the other driver was ‘OK,'” the report reads. Taylor allegedly told the officer that the accident was not a big deal. She told the officer she was leaving the Colony Hotel. The officer said that the hotel was closed that day, but she didn’t respond. Taylor also denied using prescription drugs or alcohol. The police officer wrote that he did not smell any alcohol. The driver of the Ford told EMTs that he had pain in his jaw, neck, head, and back. Taylor was also evaluated by EMTs, but she was not injured.Taylor initially told authorities she was at a restaurant on Worth Avenue before the accident, then another one on Royal Poinciana Plaza after it. Police were unable to discover which establishment Taylor claimed she was at.

Taylor wanted evidence that the other driver was injured. She also told police that the damage to her car was her problem and that it was hard being a good person. She didn’t stop at the accident scene because she didn’t think there was anything to be concerned with.

Taylor was charged with being careless and leaving the scene of an accident. She was arrested and booked at the Palm Beach County Jail. She was released after paying bail of $3,000. She entered a not guilty plea. The police found a bottle of white wine and a thermos with an unknown alcoholic beverage inside her Mercedes. The containers were behind the passenger seat where the driver could not reach them.

Taylor did not respond to Page Six’s request for comment. This is not the first time she has been in trouble. A few years ago, she was arrested for drunk driving in the Hamptons.