When it comes to hardcore Villains, none were quite as dedicated – or good at their job – as Adrian Chase aka Prometheus. Ras was always too detached, Darhk we loved to hate, and Malcolm/ Slade were just too charming to hate. Though what Chase brought to the table was pure terror. You never knew what he was going to do next because he was always 17 steps ahead. And sure Adrian Chase is dead now, but does that mean his threat is over?

This past weekend at Heroes & Villains Fan Fest, actor Josh Segarra (Prometheus) took the stage with fellow Arrow newcomers Rick Gonzalez and Echo Kellum to talk about their time on the series. And beyond the laughs and insightful conversation, one thing quickly became evident: Josh still knows how to get under Oliver’s/ Stephen’s skin! Is he a comedic genius or the evilest of evil? After hearing these two dastardly plans, you might be feeling a bit of both.

A Wedding To Remember:

During their Saturday Panel, one fan asked the actors ‘what relationships they hoped to explore this season IF they survived the island’. Echo spoke about how Curtis most likely would want to try to fix things up with his husband (ex-husband) Paul while Rick felt the most pressing relationship for Rene to fix is the one with his daughter. Though this all left Josh the odd person out as we saw Adrian blow his brains out… or did he? Sure the explosives were tied to a kill switch on Adrian, but what if he was somehow still alive? How could Adrian make his comeback? Well Josh had a hilarious and chilling answer for us.

“I hear there’s a wedding this season. And I want when Felicity takes off the veil, it’s me… ‘yah, I’m back!’”

Josh was referring to the growing rumors of there being a wedding this coming season between Oliver and Felicity. Now to be fair, we don’t even know who makes it off the island yet – and I personally have my own theory on how that could be handled/ faked out, but I’ll cover that another time. Whether you’re an Olicity fan or not, you have to admit seeing Felicity take off a mask at the ceremony to reveal Adrian would be a total mind blower – for both us and Oliver! Though when it comes to truly crushing Oliver’s – or rather Stephen’s – spirit, Josh has one final plan. 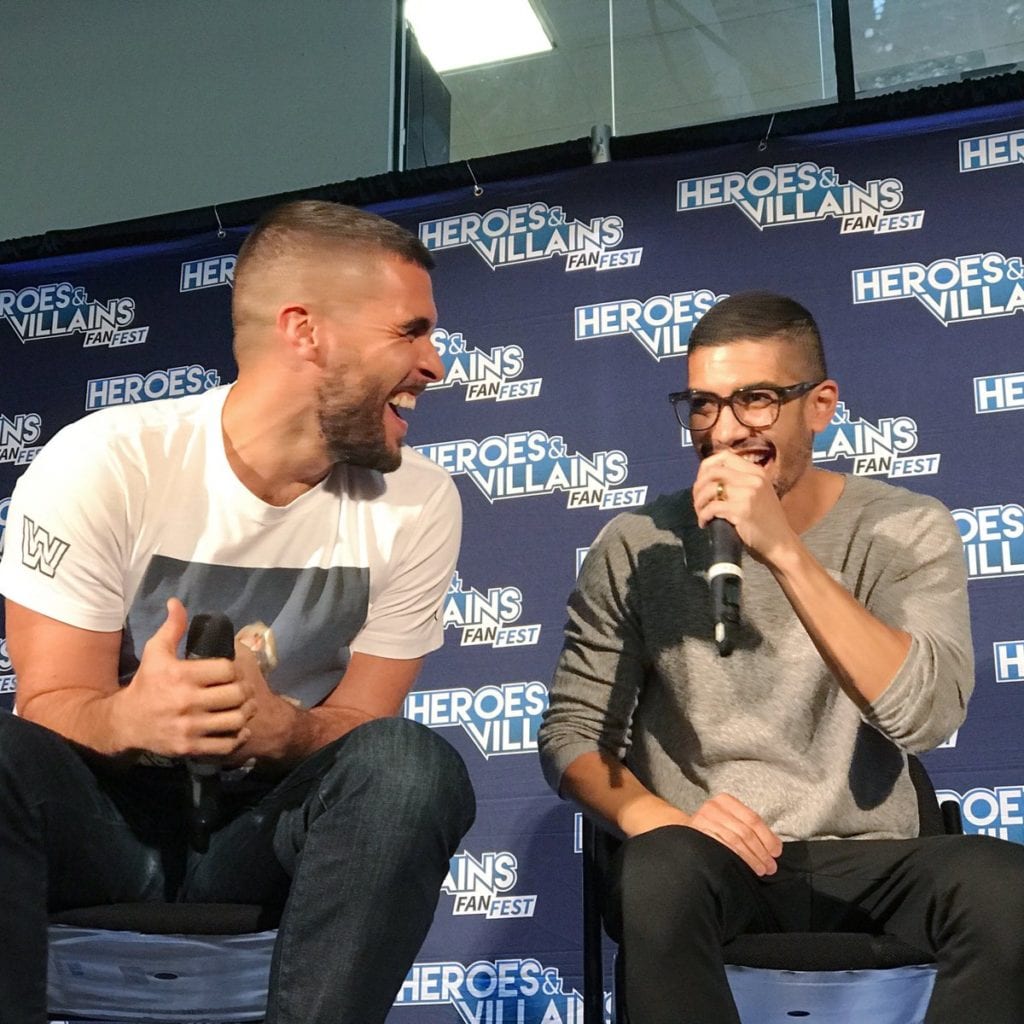 Now one thing you might not know is that Josh first started acting and working in theater/ on Broadway. This is also true of Echo who has a background in theater. So with so many musical/ theater-oriented people around, the stage could be set for Josh’s master plan. Arrow: The Musical!

We’ve seen musical episodes for The Flash and Supergirl, so it’s only natural that we’d eventually see a few more pop up. And Josh said he’d absolutely love for there to be a musical episode of Arrow, “at least just to piss Stephen off”! Josh is of course referring to last year when MTV News asked Stephen Amell about Arrow joining in for a musical episode, and Stephen quickly shut it down with:

In fact, Josh said that Stephen doesn’t want a musical episode so much, that if he were forced into it, he’d probably want to be the first one killed off so he didn’t have to sing. Prometheus, YOU FIEND! Does this mean that final battle on Loan You would have ended differently if he brought a karaoke machine to the island? Nah, Oliver would have prepared for that. After all, he did have John Barrowman (I mean Malcolm Merlynn) on his team!

Home » Fandom » Even After That Finale, Prometheus (Josh Segarra) is Still Thinking Of Ways to Torture Oliver!