If anyone was worried that Ant-Man & The Wasp might take as long as its predecessor Ant-Man took to make, fear not! Filming is underway in Atlanta and verything is moving according to schedule for its July 6th 2018 release date! In fact, things are moving so well, that we also just got our first teaser for one of the biggest attractions of the film: Evangeline Lilly’s new Wasp costume!

I am honoured to be on set today playing #TheWasp on what would be Jack Kirby's 100th birthday.
.#ThankYouJackKirby #AntManAndTheWasp pic.twitter.com/EBsV8jTK34

Evangeline Lilly shared the photo in honor of today being what would have been Jack Kirby’s 100th birthday. Now for those of you who don’t know, Jack Kirby was one of the most talented and influential people in all of comic history and had a hand in creating countless characters – including Ant-Man and The Wasp. Though despite the costume looking quite badass, it does look quite different from the one we saw in the Ant-Man post credits scene. So what happened?

Well for starters, remember the suit we saw at the end of Ant-Man was still being worked on/ a prototype, so perhaps that colorful look was it without the outer amor. Though considering this film takes place after Avengers: Infinity War, perhaps Hank Pym saw the need to add a bit more armor in response to these recent event. Then again, considering The Accords are still in play in the Marvel Universe, perhaps a more stealth-based suit was needed over a flashy yellow outfit. Sure the suit shrinks, but as we’ve seen before, a shrunken suit can still be seen/ tracked. So an additional stealth look can’t hurt. 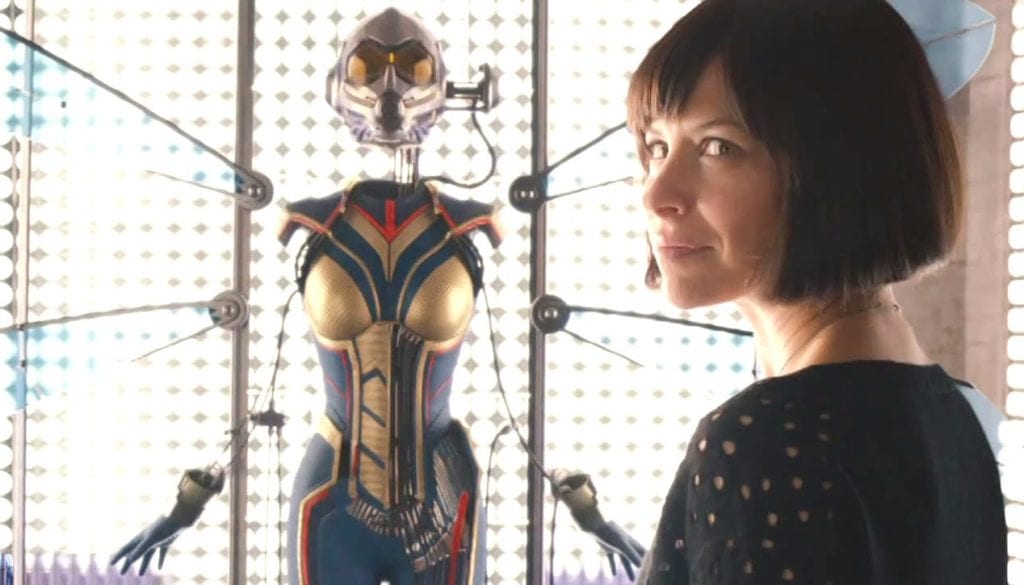 As for the wings, those aren’t visible either, but I’d assume those are collapsable – otherwise, we now know The Wasp’s greatest enemy… doors/ hallways. But all joking aside, this news release is super exciting. It might not be the costume we were expecting, but it still looks super cool! And for all we know, the suit might change throughout the film.

As for what we do know about Ant-Man & The Wasp, Peyton Reed will return to direct along with stars, Paul Rudd (Ant-Man) Evangeline Lilly (Wasp), Michael Douglas (Hank Pym) and Michael Peña (Luis).  Michelle Pfeiffer will also join the film as the former Wasp/ Hank Pym’s long lost wife, Janet van Dyne. Additionally, Laurence Fishburne has signed on to play Dr. Bill Foster (aka Goliath) and Walton Goggins will play Sonny Burch. Which one of them will play the villain isn’t clear at the moment. In the comics, Sonny was a chairman of Cross Technologies and loved to exploit things. Though since Ant-Man gave a new story to Yellowjacket – who’s usually a hero – anything can happen. But also knowing Ant-Man’s usual storyline on keeping this tech out of big business hands, I’m placing my money on Sonny Burch.