Evan Rachel Wood alleged in an Instagram post that singer Marilyn Manson “horrifically abused” her for years. As a result of her allegations,  four other women also came forward with claims of abuse against Manson, whose real name is Brian Warner.

“He started grooming me when I was a teenager and horrifically abused me for years,” wrote Wood, who was engaged to Manson in 2010. “I was brainwashed and manipulated into submission.”

Wood, 33, has spoken for years about how she had previously been in an abusive relationship with a man who tortured and threatened to kill her, but had not named the alleged abuser.  If the two are connected, her past statements would be connected to Manson.

In May 2019, Wood gave evidence to the California Senate Public Safety Committee on behalf of the Phoenix Act, a group aimed at pushing legislation to help abuse survivors. Wood spoke about a relationship she was in at age 18 with a man who had a lot of “charisma and power,” who left her “completely trapped and terrified for my life,” in a relationship full of emotional, physical, and sexual abuse.

“He broke me down through means of starvation, sleep deprivation, and threats against my life,” Wood told the Senate, her testimony republished in full by Nylon. “Sometimes with deadly weapons, which would result in me having severe panic attacks where I was unable to breathe or stop shaking.”

“If I tried to sleep, he would throw things at me, or instruct me to do drugs, which would disorient me, and keep me awake, sometimes for days,” said Wood. “Once I was weakened by no sleep and little food, he would sometimes force me to partake in acts of fear, pain, torture, and humiliation, which he would videotape and which I felt powerless to stop.”

She spoke about one horrifying incident when she was tied up by her hands and feet and tortured. “Once I was restrained he beat me and shocked sensitive parts of my body with a torture device called a violet wand,” said Wood. “To him it was a way for me to prove my loyalty. The pain was excruciating. It felt like I left my body and a part of me died that day.”

Four other women also came forward on Monday with allegations of abuse against Manson,

Model Sarah McNeilly said on Instagram that Manson “tortured” her, including locking her in rooms and throwing her against a wall.

“I was emotionally abused, terrorized and scarred,” wrote McNeilly. “As a result of the way he treated me, I suffer from mental health issues and PTSD that have affected my personal and professional relationships, self-worth and personal goals.”

Ashley Lindsay Morgan wrote on Instagram that she met Manson sometime around 2009 or 2010 when she was modeling in Thailand, and they quickly moved in together.

“There was abuse, sexual violence, physical violence and coercion,” wrote Morgan. Morgan, who is Jewish, said Manson would request that she bring him Nazi memorabilia back from Asia.

“I brought him all of this horrible stuff, and feel so much guilt and shame because of it,” she wrote. “I wanted to believe it never happened and he wasn’t hurting people the way he hurt me, shamed me, publicly embarrassed me.”

Vanity Fair reported that another woman, Ashley Walters, wrote on Instagram that she has PTSD from her abusive relationship with Manson.

“It became clear the abuse he’s caused; he continues to inflict on so many and I cannot stand by and let this happen to others,” said Walters. “Brian Warner needs to be held accountable.”

A fourth woman, Gabriella, who is an artist known as sourgirrrl on Instagram, also shared statements accusing Manson of abuse, including that he cut her during sex and took photos of her naked without her permission and sent them to others.

Gabriella said they met in 2015 when she was 22 years old, and by the end of the relationship, she was having suicidal ideation. She also shared photos of the two and text messages between them. 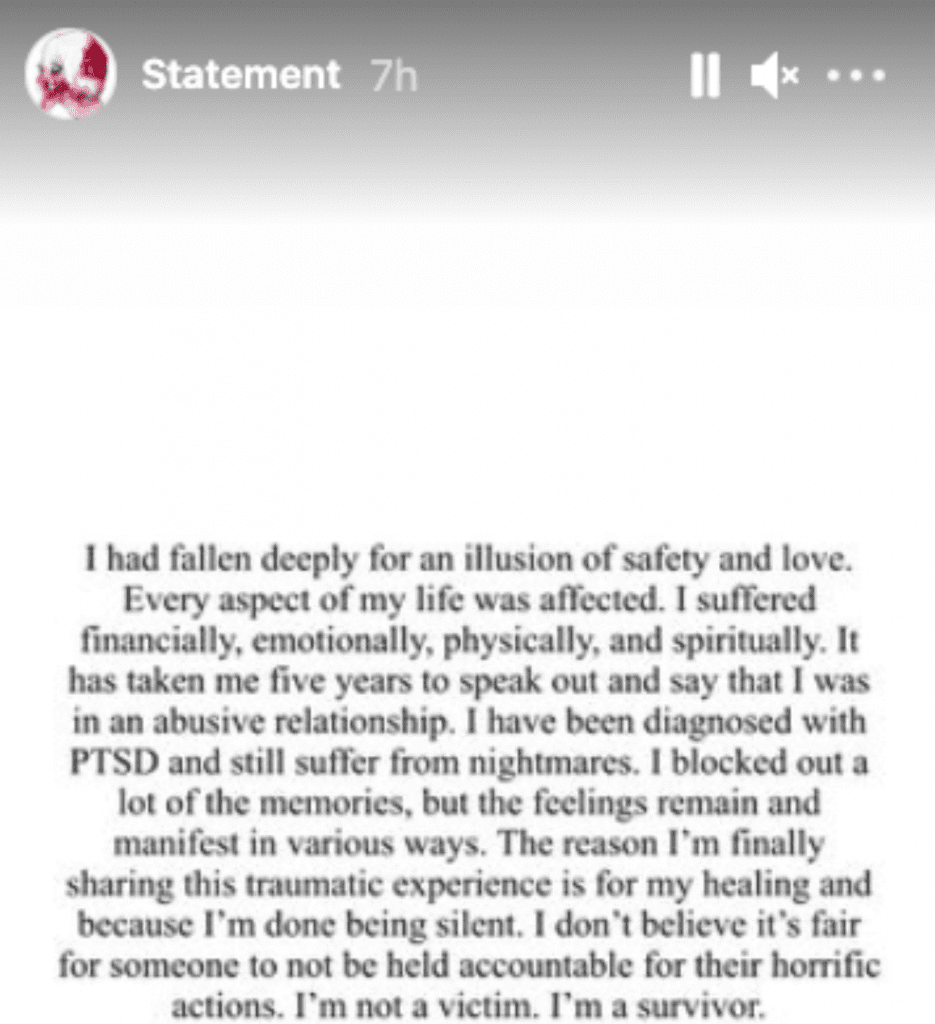 “Every aspect of my life was affected,” she wrote in a statement posted on her Instagram story, where she also shared the statements of the other women accusing Manson of abuse. “I suffered financially, emotionally, physically and spiritually.”

In 2018, Manson was accused of having raped someone in 2011. However, the Los Angeles District Attorney’s office did not press charges.

In recent years, Manson has worked as an actor and writer on multiple TV shows, including Lovecraft Country, Creepshow, and Riverdale.