It was a long-held notion among DC fans that Superman has religious undertones to his personality. When he’s worshipped by the people, for example, or how Superman would show up beside pictures of Jesus. And if you thought I was talking about a few sequences from Batman vs. Superman: Dawn of Justice and Man of Steel, you’d be wrong as this has been an ongoing thing since the comics.

u/Square_Engineer_8121 posted a gallery filled with images of Superman next to various Christ figures or worshiped by his devotees, similar to how he was seen as a saint by others. Something along the lines of what Snyder did with the DCEU’s superhero. Fans have likened the sequence where Superman’s son, Kal-El, is treated like a heavenly savior in Batman vs. Superman and Man of Steel to another moment in the film when Kryptonian child was revered as a god. They also noted how Zack Snyder made religious undertones very obvious throughout the picture.

Since the character was created by two Jewish artists, some Christian fans ridiculed the Jesus allusion. They observed how using Jesus to represent Superman is lazy because he was supposed to be similar to Moses or a contemporary messiah. 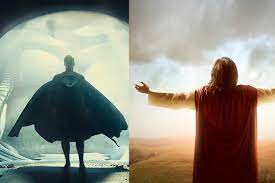 Some fans expressed their anger for Superman, who they’ve always considered to be some guy just wanting to help people. Instead, people made him into a god. These were the same complaints leveled at Jesus.

While it’s unlikely that Superman was designed to be a modern religious icon, people–including religious experts–have recognized the subtext. While fans had mixed feelings when Snyder made it more apparent in the movies, keep in mind that the religious meaning behind the hero has been there for some time.

Home » Movies » Enjoy This Comparison Of Superman and Jesus, Which Demonstrates How Biblical Symbolism Underlies the Superhero