Emma Stone probably receives a lot of proposals in her day to day life, but recently, she received the promposal of a lifetime. A student from Phoenix, Arizona recorded a video asking Emma to prom in the most fitting way – with a La La Land themed video and song. He didn’t just throw something together quickly either, he got other kids from his school involved and he even dressed to the nines for the video. The entire thing was incredible and you probably read about it on social media.

Emma is a busy lady, so due to work obligations, she had to turn down the invitation but she did send Jacob Staudenmaie a letter telling him how much she loved his video and that she wished she could have made it.

“JACOB, thanks for making the greatest proposal I’ve ever received.  I can’t tell you what an honor that was and how much I smiled through that entire beautifully orchestrated video. I’m in London working, but I hope you have the best time at prom, and I’m grateful you thought of me. THANK YOU. P.S. I do see Gosling around the eyes. Love, Emma.”

In addition to his awesome letter, Emma went another step above and beyond and made sure Jacob and his prom date would have some awesome flowers for their big night.

That’s right; she sent Jacob and his date a stunning set of flowers for the dance and the pair looked smashing. She also sent a note along with the flowers and wished them lots of fun at their dance. 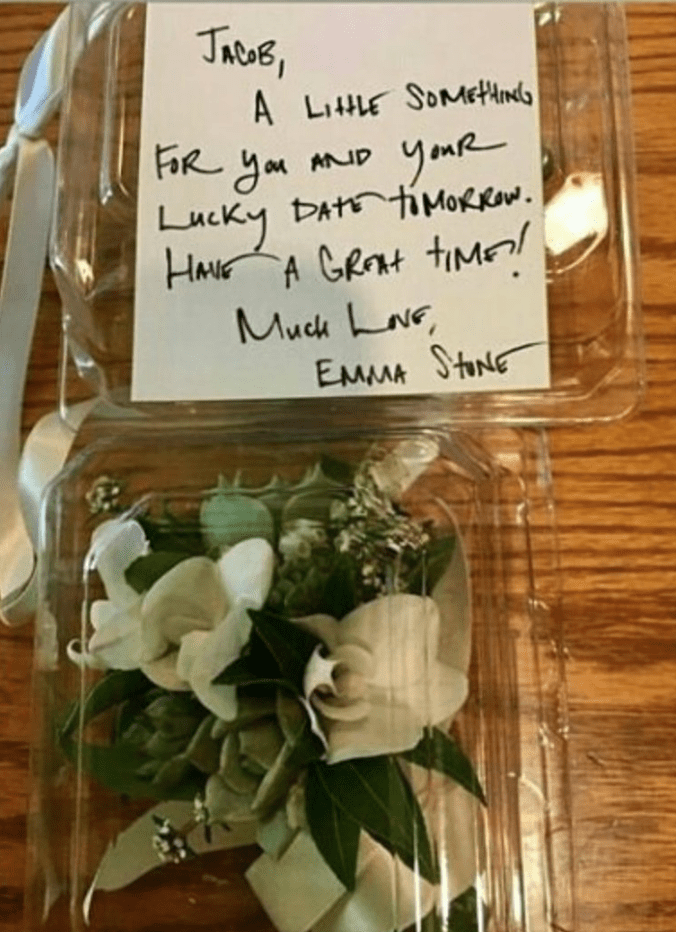 We’re even bigger fans of Emma Stone now after she went above and beyond to show Jacob that she appreciated his gesture.