We’re just a few days away from Arrow’s winter premiere so having Emily Bett Rickards and David Ramsey attend Heroes and Villians Fan Fest in Portland this past weekend could not have come at a better time! 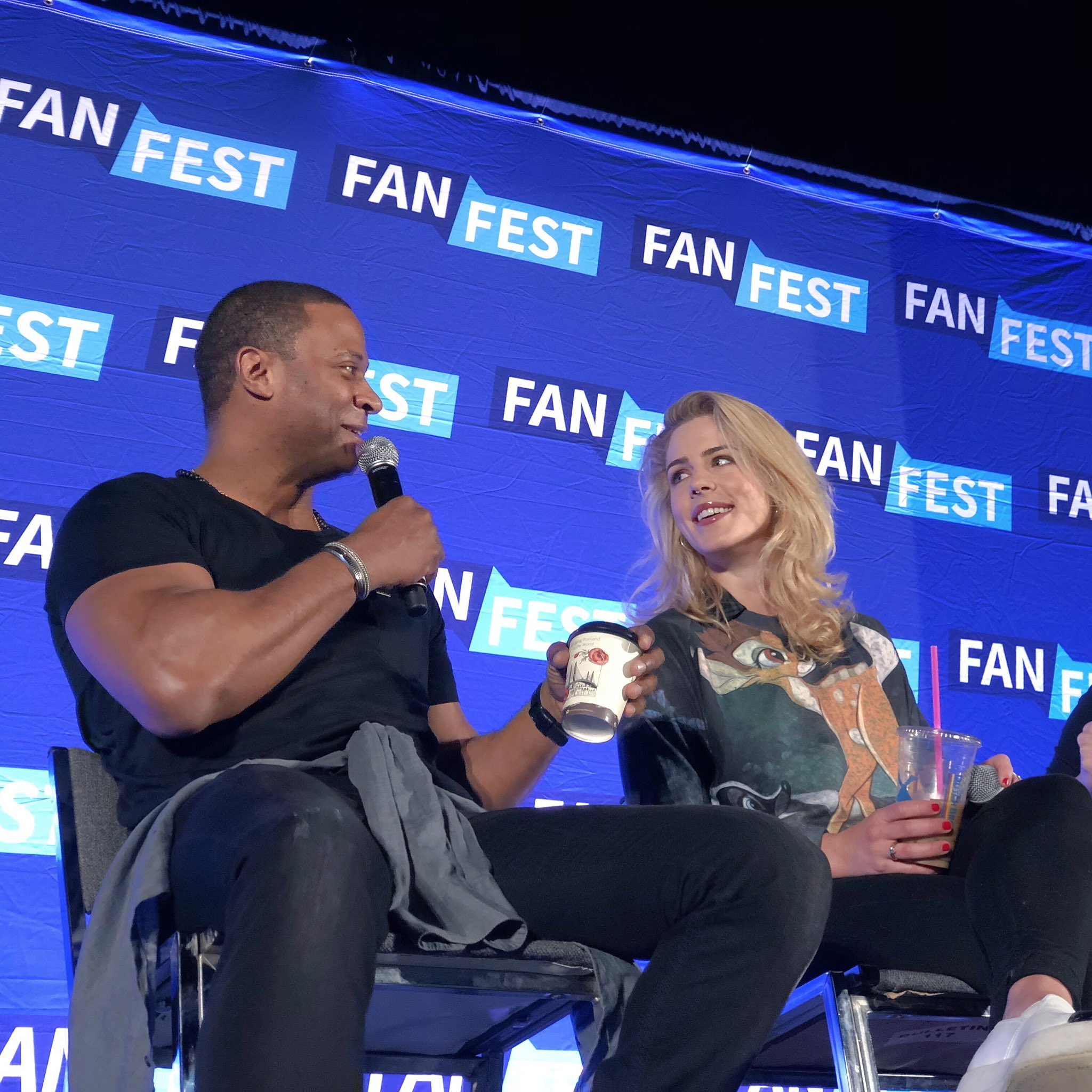 When Felicity Smoak first made her appearance on the Arrowverses’s namesake, she brought a light and a humor that we didn’t even know we needed. She had an immediate spark with Oliver, but it was her intelligence and tenacity that made us all fall in love with her character and the actress that played her – including her cast mates!

Throughout the seasons, we’ve seen Felicity grow from the quirky girl hiding behind the computer to a total badass willing to do anything for her team and her people. She’s overcome so many obstacles personally, romantically, and professionally and has always found that light at the end of the tunnel and it’s one of the qualities that Rickards loves the most.

“I’m attracted to Felicity’s bravery, I try to connect to that. I’m chasing that”

And it’s safe to say that Emily has taken Felicity’s strength to heart…literally. Her and Ramsey paused their panel for a quick push up competition. She completely dominated by the way.

Emily was also asked what made her decide to become an actress, a decision we are all grateful for, and she gave a thoughtful answer about her love of stories at a young age.

“I did a lot of dress up. Read a lot of books. And I think what I always loved was having stories on TV, watching stories, and hearing other people’s stories and then metabolizing those stories and going to talk to my mother like a 40-year old woman at the age of 4… I know I always wanted to do it and I always loved different stories…illustrations and making something come alive.”

Of course, we couldn’t have Team Arrow in the house without discussing the dramatic mid-season finale where it was revealed that the FBI found a witness in their vigilante case against Oliver, and it was someone on his team. When asked if either one of them thought it would be one of their characters that were the rat they both responded with a “No, not even a little bit.”

But fans were dying to know whether or not they’d be seeing more of Diggle and Felicity together in the back half of the season, and you’ll be happy to know the answer is affirmative, but only if you call them Delicity.

Q: “Are we going to get more Diggle and Felicity moments?”
Emily: “First of all, call it what it is: #Delicity.”
…
David: “Because there has been a fragmentation in the teams, [there is] a lot more interaction between Diggle and Felicity.”#HVFFPortland

David, Emily, and Stephen are the reason why OTA will always be the best. 💘 #Arrow #HVFFPortland pic.twitter.com/AOnUBGPR0c

Stephen: Don’t get on the boat, you idiot! With your girlfriend’s sister.

Emily:  If Felicity was 2 inches taller, she wouldn’t have to wear 4-inch heels.

Emily also couldn’t resist a shot at Oliver’s often moody character when asked what would be on the Orginal Team Arrow’s playlist:

Q: “What would be on Oliver, Diggle and Felicity’s playlist?”
Emily: “My Heart Will Go On.”
…
Emily: (about Oliver’s) “Matchbox 20.”#HVFFPortland #Arrow

Arrow returns to The CW this Thursday at 9:00 EST. Be sure to head back to FanFest.com for all of your favorite vigilante coverage! Can’t wait until then? Check out some of our other Arrow articles in the meantime:

‘Arrow’: Roy Harper returns in New Behind the Scenes Photos