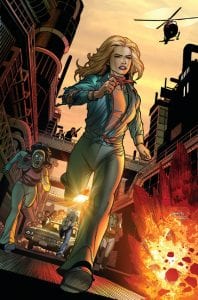 The comic books published by Dynamite Entertainment do not fall into easy categories. Series have starred the internet sensation Grumpy Cat, the government spy James Bond and the sword and sorcery heroine Red Sonja.

Forthcoming books featuring Nancy Drew and the Hardy Boys and a mini-series teaming up the Bionic Woman and Wonder Woman, on loan from DC Comics, further broaden Dynamite’s library. And that is exactly how Nick Barrucci, the company’s chief executive and publisher, likes it. 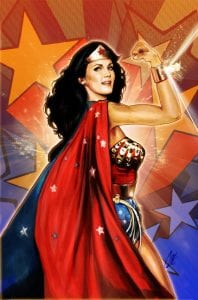 “I think we’re more than a licensing publisher and more than a comic book publisher,” Mr. Barrucci said in a telephone interview. Dynamite, which has an office in Mount Laurel, N.J., publishes comics with licensed characters like James Bond, instructional books that include Stan Lee’s “How to Draw” series and lavish hardcover books that celebrate topics like the art of Atari. “The company looks at different categories and different opportunities to grow,” Mr. Barrucci said.

Randy Lander, the owner of Rogues Gallery Comics & Games in Round Rock, Tex., said Dynamite “has a pretty far-reaching philosophy, which means their odds of getting a hit are pretty good, but they’re putting out a ton of books, which means their odds of short-lived series are also pretty good.” He added: “They’ve got relationships with comic legends like Matt Wagner. They’ve tapped creators who are perfect fits for a license, like Warren Ellis on James Bond or Jeff Parker on Flash Gordon.”

In 2011, Dynamite published a comic book version of the Bionic Man, based on an unproduced screenplay by Kevin Smith, which became a continuing series. It was replaced in 2014 with “The Six Million Dollar Man: Season Six,” a comic book continuation of the 1970s ABC television series. The Bionic Woman was similarly revived. Next year, she will meet Wonder Woman ’77, the heroine of a digital-first series published by DC Comics and based on the CBS television series starring Lynda Carter.

Andy Mangels will write the adventures of these heroines from the 1970s. “When Andy suggested this, it just seemed perfect,” said Joseph Rybandt, the executive editor of Dynamite. “He was passionate about the project and a talent we had not previously worked with.” As an added bonus, “Andy is a super Wonder Woman fan and a super Bionic Woman fan,” Mr. Rybandt said.

One of Dynamite’s goals is to further diversify its audience, which is where Nancy Drew and the Hardy Boys come in. Their new series, which will make its premiere next year, will take two tracks, Mr. Rybandt said — “one, which aims for the mass-market teen and tween reader, and also something for the comic book market that aims a little older.”

When asked about their company’s achievements, both Mr. Barrucci and Mr. Rybandt recited a litany of expected projects and one surprise involving real estate.

“Our real biggest success is that we’ve opened up New York offices and added to the sales and editorial team,” Mr. Barrucci said. They made the move in part to be closer to publishing partners, including Random House and Scholastic, and to have a chance to acquire talent that became available when DC Comics moved its editorial operations to Burbank, Calif., last year. “In a lot of ways, it’s the biggest risk we’ve ever taken. But in every way, it’s the most exciting time of our careers,” Mr. Barrucci said.

Photos used with permission from Dynamite and DC Comics.