Exciting news for Jumanji fans! Dwayne “The Rock” Johnson has confirmed that Jack Black will be joining him in the upcoming Sony Pictures reboot.

Rumors surrounding Dwayne Johnson and  Kevin Hart’s involvement with the reboot began to circle cyberspace last month. Johnson confirmed his involvement only a short time later via Instagram (and the fans rejoiced!).

Earlier this week, Johnson took to Instagram, once again, to announce the reboot will be paying proper tribute to the 1995 original film as well as its star, the late, great, Robin Williams. This certainly calmed any qualms we had regarding the remake of the iconic and beloved film. It is safe to say that this statement gave us anew sense of excitement regarding the film.

Today, Dwayne Johnson has done it once again! ViaInstagram (which Johnson now has us actively stalking), he posted the below message confirming Jack Black’s involvement and, WAIT A MINUTE!

Did he just also confirm Kevin Hart as well?

Check out his post below.  Are you getting excited now?

The Jumanji reboot is set to be released in theaters on July 28th, 2017. 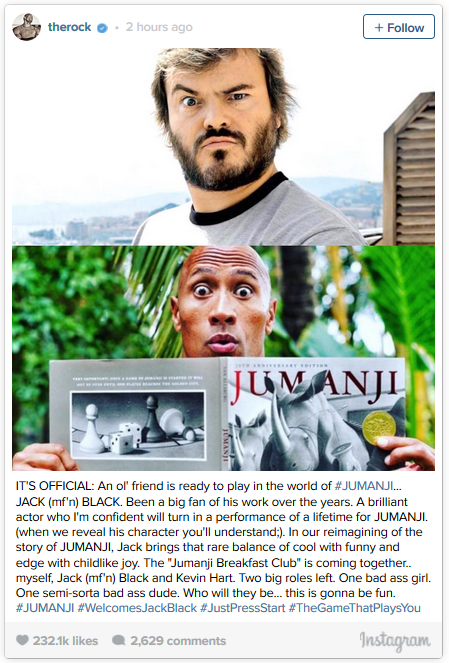