The new Ducktales series has been pretty epic. From incredibly improved characters to cohesive storytelling that is working its way up to a massive story of deceit and intrigue, this series has it all. Though one feeling we haven’t gotten since the premier was that of “a proper adventure”. This week’s episode changed all that and even gave us our first look at character development

So pull up your DVR or check out the link below to watch it on Disney XD, and take a Closer Look at Ducktales (2017) Episode 07, “The Living Mummies of Toth-Ra!”

Scrooge first said this line a few episodes ago at the end of “The House Of The Lucky Gander!”, but this is the episode that finally made us feel it too. We’ve had some amazing episodes thus far, but most – if not all – have focused on the family dynamic and/or local threats that pop up. We know from the premier – and original series – that Scrooge is an adventurer; and when we think adventure, we think tombs! This episode finally gave us a true adventure in every sense of the phrase, ie: exotic locale, traps, vengeful gods and curses. Even more than that, this episode also gave us the episodic fulfillment of the opening credits where we see the McDuck crew defeat a mummy (which we now know as Toth-Ra). Does that mean we’ll eventually see them face The Flying Dutchmen or explore the Treasure of the Lost Lamp storyline? – the scorpion we see in the opening credits are from that film.

Though even beyond this, an adventure has a key component to it: the journey. Yes, there’s mystery and traps and grand exploration of fabled realms; but there’s also exploration of the self. It’s all about being able to eventually face an obstacle you wouldn’t have been able to overcome at the beginning of the journey. This is a type of character development, and it looks like this episode gave us our first small taste of that with Louie. Webby calls Louie out multiple times throughout the episode on how his lies and ‘working an angle’ always make things worse, but towards the end, he himself even comes to admit this about himself and promises to try to be better. 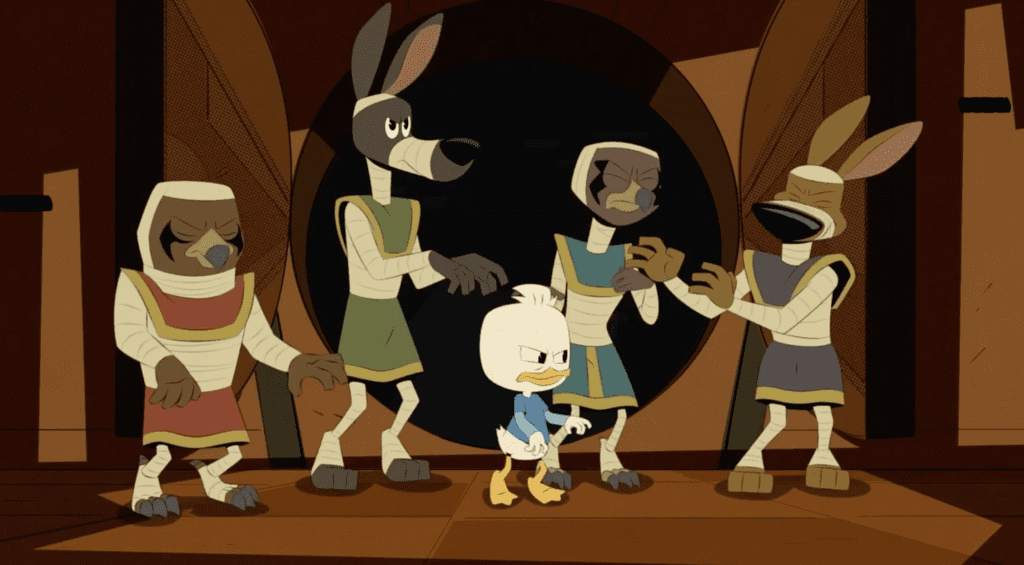 Will Louie stop being the greedy/ best at lying of the group? No, but he acknowledges it and this should make him better at it – or at the very least better at picking his battles. Compare this to Huey a few episodes ago at the end of “Terror of the Terra-firmians!” Huey sees first hand that doing things ‘by the book’ isn’t always an option, but he doesn’t truly accept this but rather writes a note in the book and goes back to his prior belief that ‘everything is in the book’. Then again, I suppose one could argue that by writing in the book Huey is indeed learning as well; but this is the point where we actually get a character acknowledge their shortcoming.