Who’s never wrong but always right?
Who’d never dream of starting a fight?
Who gets stuck with all the bad luck?
No one… but Donald Duck!

That’s how the old Donald Duck cartoons from the 40s and 50s used to start, and this week’s episode of Ducktales paid wonderful tribute to that by playing upon how Donald is truly the Duck “with all the bad luck”. Though as we’ve come to expect from the new series, Ducktales didn’t stop there, but actually continued setting up the Magica De Spell storyline in a very secretive – yet needed – way. So it’s time to pull up your DVR or check out the link below to watch it on Disney XD, and take a Closer Look at Ducktales (2017) Episode 06, “The House Of The Lucky Gander!”

“Who Gets Stuck With All The Bad Luck” – Donald Duck Throwback:

As I began saying above, Donald Duck is truly the Duck “with all the badluck”. So if there was ever a time to introduce Donald’s lucky brother Gladstone and a luck vampire, it would be this episode. In fact, this serves as our first real Donald centric episode. Sure we had him and Beakley as the secondary story in “Daytrip of Doom!”, but this is a purely Donald-centric episode, which is even shown in how Scrooge doesn’t get to participate in his own challenge against Liu Hai.

We had tons of classic Donald Duck moments – things breaking, getting blamed for something he didn’t do, getting upset and sticking to an answer that is clearly wrong (“27!”) – though in the end we got to see/ learn something we don’t usually associate with Donald: never giving up. You have to give the duck some respect. No matter how bad things get, he always plows ahead.

Beyond the Donald Duck portion of this episode, there was still a secret secondary story – and no, I’m not talking about Launchpad’s quest (which was brilliant by the way). I’m of course talking about Scrooge’s luck or rather how luck doesn’t have anything to do with it. In fact, the idea of Scrooge’s luck (or non existent luck) was brought up almost as much as Gladstone’s. Even Liu Hai thinks Scrooge’s luck would be “the most delicious of all”. Though while Gladstone is a lucky do-nothing, when it comes to Scrooge, “luck had nothing to do with it”. 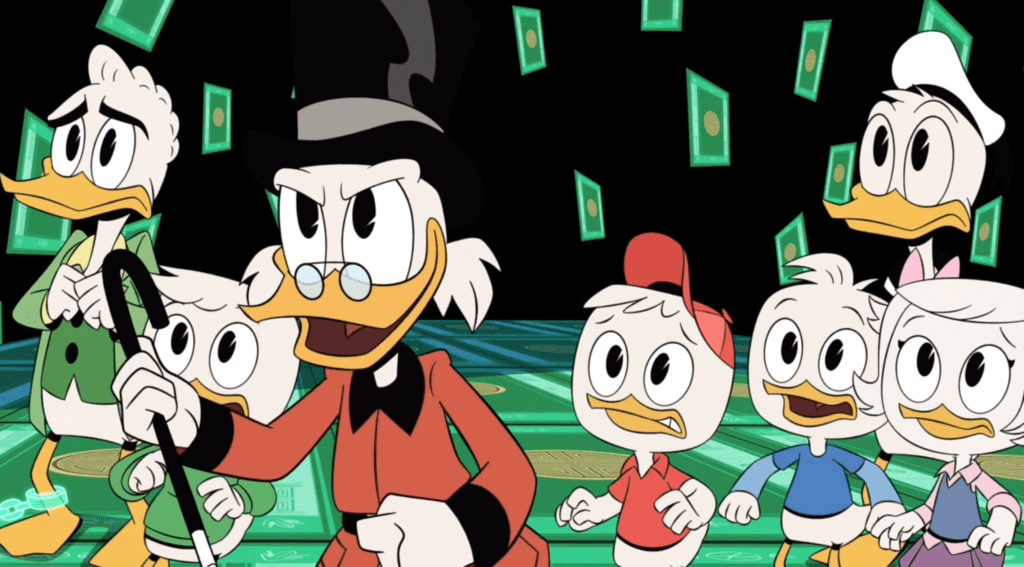 So how does this tie into Magica De Spell? Well, I began talking about this in “The Beagle Birthday Massacre!”, but this all ties into Magaica’s recurring mission: to obtain “The Midas Touch”. Unlike Liu Hai, she knows that Scrooge’s success doesn’t have anything to do with inborn luck; but rather that he made his own luck. Magica sees Scrooge’s Number One Dime as the item that inspired Scrooge’s good fortune, and by possessing it, she can tap into the luck he made for himself.

It’s very subtle, but this makes me wonder what other none-Magica episodes had slight hints. We already know “The Great Dime Chase!” introduced the Number One Dime but when Scrooge mentioned the magic defense he employs to ward off the hexes placed on him…. Was he talking about Magica? Will they have a slightly romantic history here as well? Either way, Magica is definitely looking more and more like a season plot.