If you’re anything like me, you’ve been anxiously awaiting the premier of the new Ducktales series from Disney XD. In terms of Reboots/ continuations, 2017 has been a pretty good year thus far (i.e.: Power Rangers movie, & Samurai Jack); but Ducktales would be the true test. And Disney XD passed with flying colors!

When I first saw the animation style months ago, I was worried this might be one of those lackluster nostalgia-fueled cash grabs; but after learning about the star studded cast and how much time they’ve invested in story, I began to have hopes for this series. And after watching the 40 minute premier titled “Woo-oo!”, I can honestly say all my Ducky dreams were answered! From genuine humor to perfect story pacing and character development that FAR exceeds the original, this is a series I’m happy to call my new staple!

So check out the premier below, and when you’re finished – or if you don’t mind spoilers – keep scrolling to read my full review of this amazing start to the series!

As far as premier episodes go, “Woo-oo!” was handled perfectly as it didn’t just jump into the opening credits, but rather had a sort of prequel episode – thus putting the opening credits midway between the 40 minute special. Though even functioning as a prequel and first episode, the episodes had a wonderfully unified style of storytelling. There’s of course the main storyline (the nephews meeting their Uncle Scrooge) and a seemingly ‘filler’ storyline (Donald trying to find a job), but as the episode continues on we find that Donald’s episode isn’t filler after all but actually a way to introduce one of Scrooge’s most well-known enemies! This isn’t a series that throws random events at you in the hopes of a quick laugh, but rather one that weaves an wonderfully complex tale.

Another great story-related aspect of the show is how it doesn’t just hint at plot points but actually comes out and says them to help the younger viewers piece it together. For example, take the first time we see Scrooge sitting in a meeting learning how funding is being cut to the historical exploration and technological advancement areas of his business. The animation and voice acting show that this is a man who’s become bored with life. He longs for the cutting edge and adventurous life he used to lead. Though if you didn’t get the hints, we later hear the nephews ask “you used to be a big deal, what happened?”. Whether you caught it the first time around or had to wait for it to be said, this attention paid to Scrooge’s backstory is impressive. And as we see in the final moments of the episode, it’s an area we’ll come back to as Donald wasn’t the only co-adventurer of Scrooge but also Huey, Dewey and Louie’s mom! 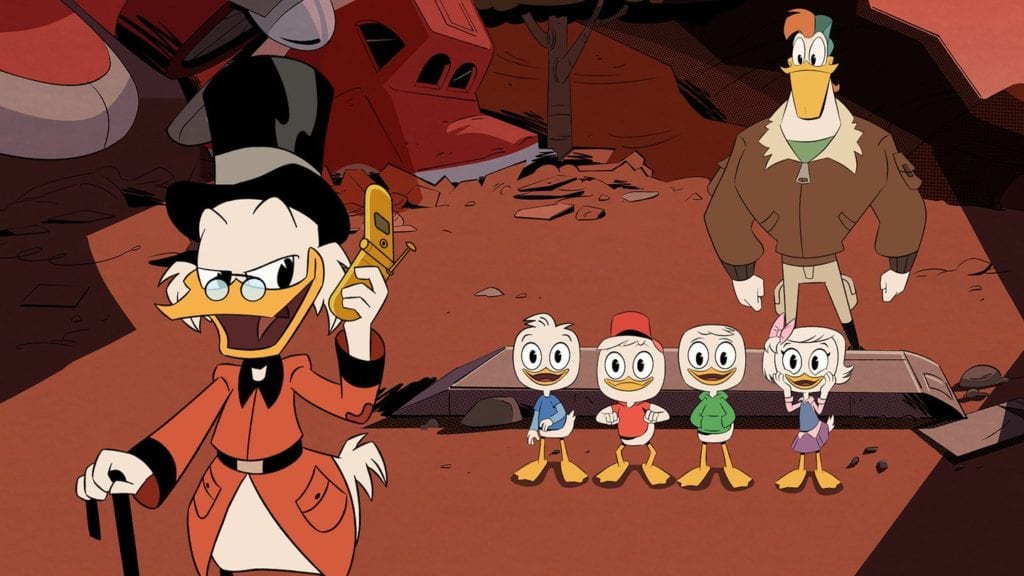 Though just as powerful as there story told are the characters created to take part in this story. As much as we loved the original Ducktales, you have to admit that many characters were… the same. This is the first time in history it actually benefits you to learn the differences between Huey, Dewey and Louie besides the color of their shirts.

Each nephew has a characteristic that ties him to Uncle Scrooge. Donald is no longer a cameo character, but actually a staple! Mrs Beakley is a strong willed, yet caring powerhouse! Though the most improved character has to be Webby who went from being simply ‘the girly duck’ to a highly trained – slightly obsessive – firecracker! Even if the animation style seems beneath that of the original series, the character development is far above! That being said, the animation style turned out to be a great choice as the simpler designs actually allow for more facial expressions and emotional conveyance. 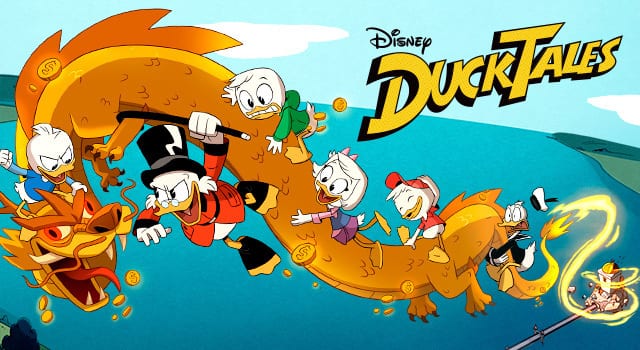 Many ‘animated kid shows’ nowadays sadly resort to the least common denominator of humor. Cheap gags and low brow humor have replaced the wit and multi-layered humor of our childhood. It’s not about teaching anything but rather giving a quick laugh and that’s it. Ducktales signals a return to the shows of our youth. It might not be Animaniacs, but there is something funny in this show for both children and adults. Every laugh feels like it was earned, but it’s not just the humor that speaks to us but the overall lessons as well. By having this show be about adventures and exploration, the writers have created a medium for critical thinking (i.e.: solving a boobytrap) and laughs (i.e.: failing to solve that boobytrap). Though some of the best comedic moments come from these vastly different characters just simply interacting with each other.