Dora is ready to set out on another wild and crazy adventure, but this time, she’s live-action and she’s on the big screen!

Paramount Pictures’ Dora and the Lost City of Gold will follow the titular thrill-seeking adventurer on a live-action question as we’ve never seen before. Just recently, the studio dropped the very first look at the upcoming film titled Dora and the Lost City of Gold. By the looks of the trailer, this looks like a super fun adventure for kids of all ages. The studio also released a stunning new poster for the upcoming film.

Check out both the first trailer and the poster below.

Get ready to unleash your wild side.🐒 Watch the official trailer for Dora and the Lost City of Gold, starring @IsabelaMoner, @EugenioDerbez, @RealMichaelPena, @EvaLongoria, and @OfficialDannyT. #DoraMovie swings into theatres August 2! pic.twitter.com/M0DGO0dAqU 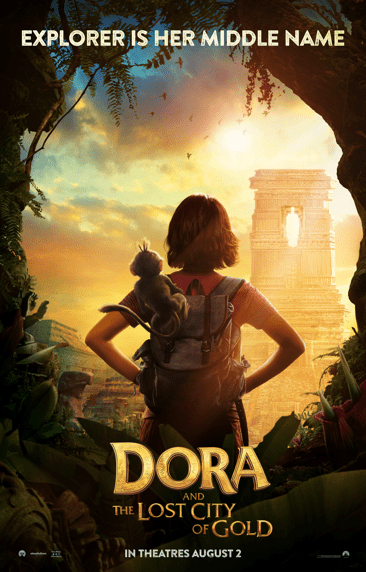 The synopsis for the upcoming live-action Dora the Explorer film reads as follows:

“Having spent most of her life exploring the jungle with her parents nothing could prepare Dora for the most dangerous adventure ever – High School. Always the explorer, Dora quickly finds herself leading Boots (her best friend, a monkey), Diego, and a ragtag group of teens on a live-action adventure to save her parents and solve the impossible mystery behind a lost Inca civilization.”

The film is directed by James Bobin.

Dora and the Lost City of Gold will land in theaters on August 2, 2019.

What do you think about the first trailer for Dora and the Lost City of Gold? Let us know your thoughts in the comment section below