Dominic Purcell has been a staple on Legends of Tomorrow since its first season! Before that he was a villain that would occasionally appear on The Flash. Usually, you could find him with his comrade, Captain Cold played by Wentworth Miller. Miller left the show some years back now, however. Due to the nature of their relationship, both on TV and in the comics, I thought Purcell’s character, Heatwave’s, time was up. He stayed for several years though, much to my delight. That time is at an end though, based on an angry post he posted to social media… then a less angry one where he clarified everything. Dominic Purcell angrily left Legends of Tomorrow… then I guess people freaked out so he had to clarify. Some of those posts have now been deleted. 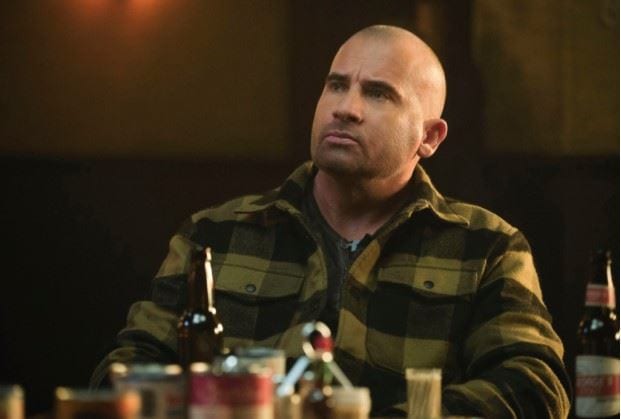 “Deal isn’t done. I have no interest. What ever cash they throw on the corporate level. Im walking away from @cw_legendsoftomorrow. It’s been a total pleasure and a humbling experience bringing @dccomics iconic character #heatwave (aka) MICK RORY to life. I smashed this character— not an actor in the world could have done better. FACT…. Such a funny cunt ……..Time to move on and see how shit unfolds. @caitylotz @nickzano look after the kids coming through. They need education. They are a number— teach them to not rely on loyalty from the studio. The studio does not care. The actors work ethic and talent must give them the confidence to question authority. ….Much love to all. It’s not lost on me how very fortunate I am. …..ACTORS HIT ME UP ON DM.”

That is one of the deleted ones. His second one, which has also at the time of this writing been deleted, clarified.

‘WHY SO SERIOUS…….. MY last post I needed a laugh. It was a joke and The press went nuts and yes I will always fuck with the press it’s fun watching them be click-bated— Truth is yes I am leaving @cw_legendsoftomorrow but will come back periodically, it’s a handshake deal with my boss Phil Klemmer. I don’t have a beef with studio @warnerbrostv. I don’t have a beef with anyone except myself haha. …Shit woke up this morning like I’d caused mass #riots …. emails , phone calls. But what a genius negotiation move. I am loved…… ps. My dear friends the press got a great one for ya next week. Ya gonna love it.”

His third one, which is still up at the time of this writing, is shown below. 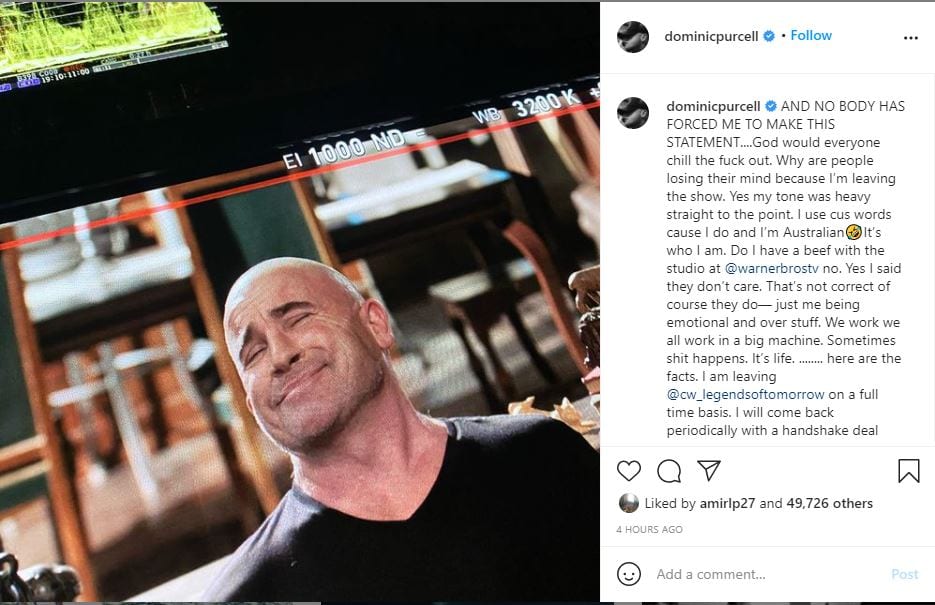 “AND NO BODY HAS FORCED ME TO MAKE THIS STATEMENT….God would everyone chill the fuck out. Why are people losing their mind because I’m leaving the show. Yes my tone was heavy straight to the point. I use cus words cause I do and I’m Australian🤣It’s who I am. Do I have a beef with the studio at @warnerbrostv no. Yes I said they don’t care. That’s not correct of course they do— just me being emotional and over stuff. We work we all work in a big machine. Sometimes shit happens. It’s life. …….. here are the facts. I am leaving @cw_legendsoftomorrow on a full time basis. I will come back periodically with a handshake deal with my boss Phil Klemmer. I have and always have had a tremendous relationship with the Bosses and the studio @warnerbrostv Peter Roth and I had a tremendous working relationship I was super sad when he retired. My wording was aggressive in tone because sometimes I get frustrated and annoyed it’s been a long long heavy year locked up in #Vancouver for 9 months without going home. Who doesn’t and who hasn’t lashed out. Im fuckin human. So for god sake chill on. “Dominic Purcell and the studio are beefing” total bullshit. It’s simply not true. I haven’t quit. My contract is up. 6 years not 7. I’ve never quit on a contract and never would. So to all the fans you will see me again next year on season 7 periodically. I hope this has clarified stuff. I must admit I was freaked the fuck out on how much press I got or this got. But hey @cw_legendsoftomorrow hasn’t ever got as much press ever stoked!! cheers 🤣🤣🤣Apologizes for the ridiculous photo. It’s Mick trying to smile.”

The whole thing has kind of been a journey. How do you feel about the whole thing? Are you upset that Dominic Purcell angrily left LOT?