The last time Jodie Whittaker spoke to EW to discuss how the British actress’s life changed since becoming the new face of the series as it’s also confirmed she will be around for at least one more season.

“I wear a baseball cap on the tube or on the subway,” quips Whittaker, 37. “But really, my life has changed in a wonderful sense. I’ve got a massive social life now, which is either the people that work in our very tight-knit family in Cardiff [where the show is filmed] or a load of Whovians who are lovely to you when you walk past them.”

Later this season, the Doctor will also face off against another old foe in the clanking form of the Cybermen, “They’ve got a lot of presence on set,” says Whittaker to EW. “When they move in unison, it’s incredible. It’s really exciting.”

BBC AMERICA previously released the official global trailer for Jodie Whittaker’s second season as the Doctor, which introduces terrifying new monsters alongside the return of some familiar but not-so-friendly faces.

Following the show’s return on New Year’s Day, BBC AMERICA has partnered with BBC Studios and Fathom Events to bring Doctor Who back to the big screen on Sunday, January 5. This one-day-only special event, featuring the premiere episode and an exclusive early unveiling of the second episode of the new season, will be simulcast to over 600 cinema screens nationwide. After the screening, audiences will be treated to a LIVE Q&A with Jodie Whittaker, Tosin Cole, and Mandip Gill, transmitted from The Paley Center for Media in New York. Tickets and a list of participating locations will be available beginning Friday, December 6 at the Fathom Events website. 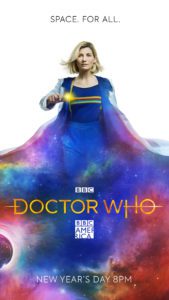 Home » Uncategorized » Doctor Who: Jodie Whittaker Reveals She Will Play the Doctor for At Least One More Season