It was easy to be skeptic of Disturbia when it hit theaters on April 13, 2007 . After all it seemed like a pretty blatant parroting of Alfred Hitchcock’s Rear Window, which was released in 1954. In fact, the similarities were so present that DreamWorks was actually sued for copyright infringement – the lawsuit was eventually dropped. All of that aside though, there were a lot of things that made the teen thriller a hit, including the young and almost unknown cast, the plot, and even the soundtrack.

Let’s take a quick look back at Disturbia on it’s 10th anniversary.

The film follows Kale Brecht (Shia LaBeouf) who punches his Spanish teacher after the sudden death of his father in a car accident. He’s placed on house arrest and while initially it’s all fun, games and loads of junk food, he eventually becomes bored and starts spying on his neighbors. He sparks an interest in his new next door neighbor Ashley (Sarah Roemer) and the creepy Mr. Turner (David Morse). 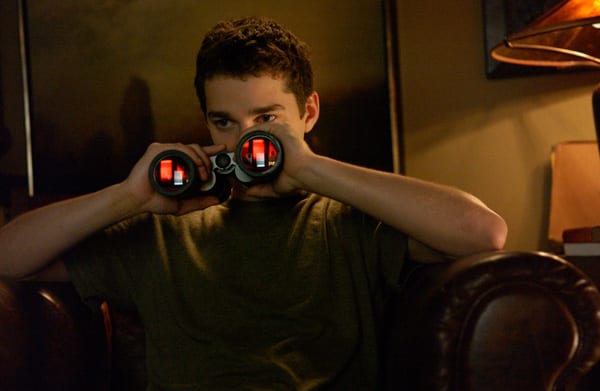 When Kale believes he witnesses a murder one night in Mr. Turner’s house he becomes completely obsessed with finding out the truth. However, soon after he begins investigating he comes to find out that something even more dangerous is going on. The only problem is he can’t leave the house. The plot itself is very well-rounded. It’s got some well intended teen angst, romance, bromance, and most importantly it’s got some awesome scares – especially in the film’s final act.

The film starred a charismatic Shia LaBeouf, who was gaining some cinematic notoriety with roles in films such as Holes and The Greatest Game Ever Played. In fact, Executive Producer Steven Spielberg put LaBeouf on his shortlist for the cast because he had been so impressed with his performance in Holes. 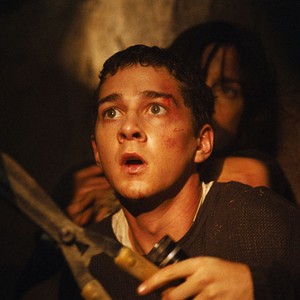 Director D.J. Caruso ended up casting LaBeuof as Kale Brecht because he felt that he was someone “who guys would really like and respond to, because he wasn’t going to be such a pretty boy”. LaBeouf was able to convince Spielberg of his potential leading man status and secured starring roles in his future films such as Transformers and Indiana Jones and the Kingdom of Crystal Skull.

To balance out LaBeouf’s more angsty role, Aaron Yoo provides some hilarious comic relief as his best friend Ronnie Chu. His shining moment for me was the Spanish class scene when he realized that the word for ‘perhaps’ (quizás) sounded like ‘kiss ass’ and proceeded to use it at the end of every sentence.  The young cast was rounded out with Sarah Roemer who played Kale’s new neighbor and love interest, Ashley.

Disturbia had a pretty fun and eclectic soundtrack, although it did receive mixed reviews from critics. It features music by Nada Surf, Guster, Afroman and Buckcherry and serves as a nice backdrop for the film’s .  Composer Geoff Zanelli received praise for his original score.

A review in All Music wrote: “For his score to the 2007 surprise hit thriller Disturbia, composer Geoff Zanelli created moody, nuanced orchestral pieces that both heighten the film’s drama and reveal a delicate sensitivity. With its elegant and evocative tracks, this album marks Zanelli as a promising film-score composer, and works as an excellent counterpoint to the eclectic, pop-oriented Disturbia soundtrack.”

Check out the soundtrack playlist below!