Finally! Disney has released merchandise for ‘Baby Yoda’ aka ‘The Child’ from Disney+’s The Mandalorian.  However, tame your excitement because it’s not impressive.  In fact, I think they ordered it all from Cafepress like the rest of us have been doing over the past two weeks.

Disney has release merchandise with ONE image on it of Baby Yoda and have placed it on shirts, bags, mugs, and cellphone covers.  And that’s it! There aren’t any toys.  There aren’t any stuffed animals.  There’s not a remote control, hovering Baby Yoda that follows you around by sensors.  There’s just stuff. And it’s not even that great. 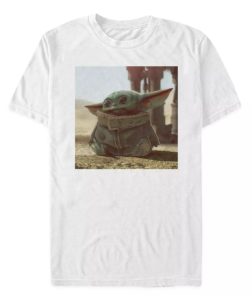 All Star Wars fans were hoping for something that looked as cute and cuddly as the little green screen-stealing machine!

This appears to be completely rushed by Disney and that’s difficult to believe because they had to have known what a pop-culture phenomenon they had on their hands in Baby Yoda! Disney is usually better than that!

Oh well, at least there’s a ton of cool fan-made and craft stuff out there on the internet, like this little guy who is on his way to my house now!

Tell us what you think of this initial run of merchandise at Disney.com?