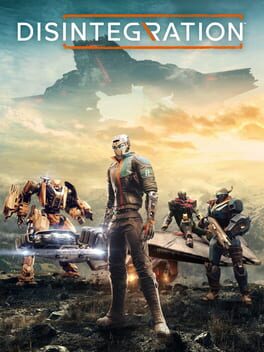 It’s very tough for me to play something that seems “original”. When I say seems original, I mean I’ve played so many games it’s hard for anything to feel new. Just an element of the title needs to be fresh for me to get that “new car smell”. So I was incredibly surprised when Disintegration by V1 Interactive managed to show me something different.

*DISCLAIMER: Our multiplayer review will hit at a later date as we couldn’t get into any matches at time of reviewing. We will play after launch and get back with you!*

Before we get too much into the nitty gritty of gameplay, let’s talk about the story. You play through the narrative as Romer Shoal, a celebrity grav-cycle rider. At least he was at one point, since you find yourself onboard a floating ship/prison at the beginning. As you’re being questioned by what seems to be the leader of the Rayonne, the military group who is taking over, a huge prison break happens and you run for it with a group of other robots.

Did I mention Romer and the others are robots?

Well, they are mostly. See, this story takes place in our reality, but one hundred and fifty years in the future. Due to humanity being on the brink of extinction, scientists develop a temporary solution — “Integration”. The brain is removed from the subject and placed in a robotic head, which can be attached to a body. The Rayonne feel like this is humanity’s future, and are attempting to impose Integration on everyone.

It’s this kind of premise that pulls me right into a game. My only sadness is the writer’s don’t capitalize on it. Romer falls into the same crevice in that he’s a great character but underdeveloped. I want more of the why behind Integration, and I want to understand Romer’s motives and why he’s in the prison as well. There’s a great build up once you get to the middle of the story, but when you complete the final level it just… ends. There is a lot of promise in Disintegration’s narrative, but it’s never fully realized.

I do enjoy the script and voice actor’s performance. There is a humor in the banter between characters that brings them to life. For example one of the crew, Agnes, makes fun of Romer in one of the interactions. It’s because he “likes” a human woman character, and maybe his clones will be able to put the moves on her. Romer refutes the initial statement, saying they aren’t “compatible”. This tells you something about how Integration has changed the world, the divide that exists between human and Integrated. 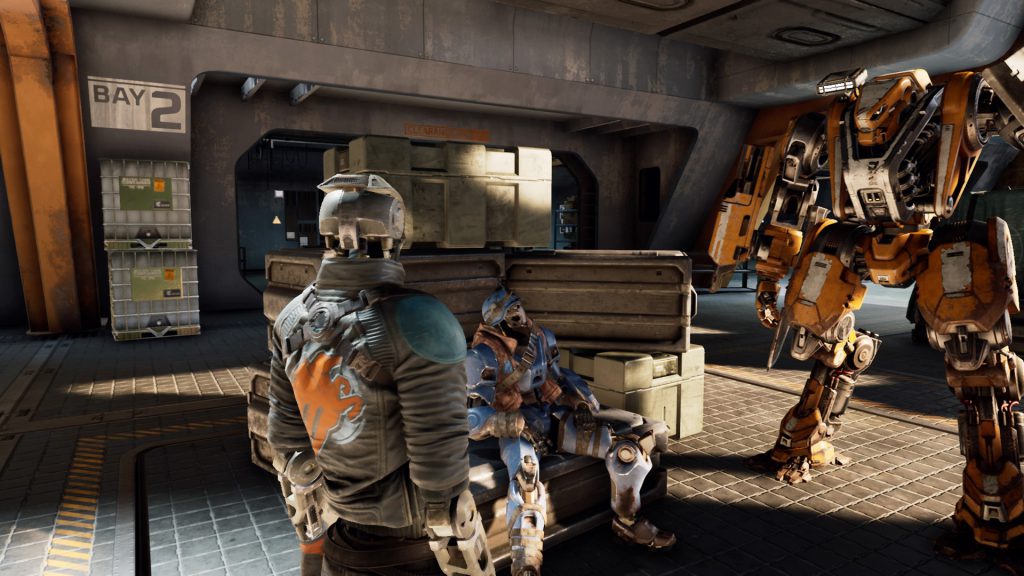 Another thing that Disintegration does well is the gameplay.

When I think of Halo, I think Bungie. Those guys are incredible at building flowing combat, and the team at V1 Interactive accomplishes that. To me you can compare Disintegration to both Halo and Destiny in how crisp the controls feel, as well as how clean the gameplay loop is. So many games fail not because of graphics, but because they can’t nail down a good feel. Flying a grav-cycle isn’t easy, but it grows on you as you play the game.

The grav-cycle is your instrument of death as you play Disintegration. You hover over the terrain of each level, raining death as you move from area to area. The grav-cycle also features plenty of weapon variety. You have machine guns, rockets, mines, truly a large arsenal. Depending on the level, your second ability can also be a healing one, with a launcher to help your allies or an area of affect orb. If you’ve played a first person shooter before, you’ll be just fine using weapons. Your biggest challenge will be getting used to flying around the battlefield.

There are many grunt units in Disintegration, but there is a diversity in enemy types as you continue through each level. Big or small, these baddies appear in large groups, and even the lowest of grunts can take you out if you don’t play it right. I love the design to plenty of these, and wish there were more “boss battle” moments with specialized foes that weren’t reused. The diversity even extends to healing, as certain foes drop healing orbs. In several levels this is your only way to regain health, so it plays into your strategy.

Speaking of strategy, we mentioned before this game mixes in real time strategy elements.

You and your buddies from the prison break form a little clan known as the Outlaws. Upon finding an old ship filled with armaments, you join with it’s caretaker to find salvage and above all, survive. When you go out on these missions you utilize several buttons as well as your field of view to command them. On the plus side, if you move too far away, they will follow you, and they do fight for themselves. One thing consoles usually don’t do well is strategy games, so it’s awesome to see one done right. 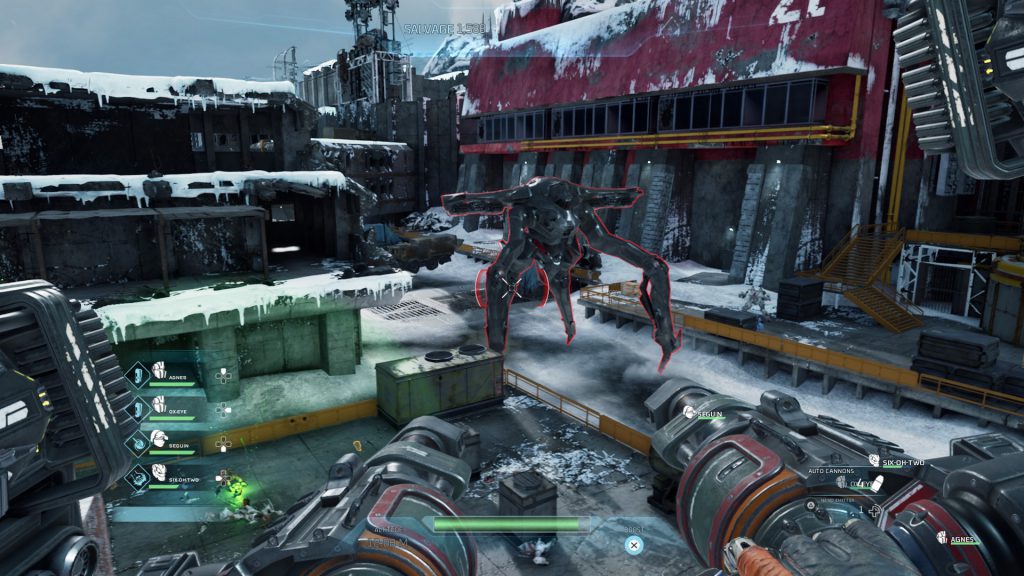 Commanding your squad is super easy. Just point, click the command button, and watch them do the thing. The coolest thing about them are their abilities. Each robot has something different they can do, and it may be the difference in winning or going back to the last checkpoint. I for one like stringing multiple together. I would use a slowing ability with a mortar strike to ensure every bit of damage hit some of the tougher enemies.

If you care about my opinion, I do recommend prioritizing the bigger enemies as you fight through each wave. There is plenty of strategy in how you play, and the difficulty can be challenging at times. I spent most of my time playing normal (Recruit), but even that had me dying a bunch in specific instances. Sometimes you have to adjust and start commanding your team to do different things to assist you.

In the end, I’m just honestly so impressed by how well it all flows together.

Each time you find yourself in the middle of levels, you’re in the hub area. It’s similar to Destiny’s Tower, but emptier. I like the idea, just wish it had more to it. Here you can chat with your crew, accept challenges, and upgrade yourself and squad. While the upgrades feel somewhat forced to me (It’s largely just percentage based), I really like the challenges. You go to different characters who give you up to three quests to defeat enemies, finish a level in a certain time, and other optional things. They add variety to each stage as well as replayability.

Now, for the not so great. There is a lot of repetition. And by repetition, I mean each level plays largely the same. Fly along the road, shoot the bad guys, move to the next spot. Sometimes you need to tell your team to disarm a bomb or turn off a barrier so you can get through. Or maybe you need to hold an area. Either way, the loop will be largely the same. That’s not necessarily a bad thing given the game does a good job with mixing things up with your weapon load-out, but for a game with as much going for it as Disintegration, it’s disappointing. 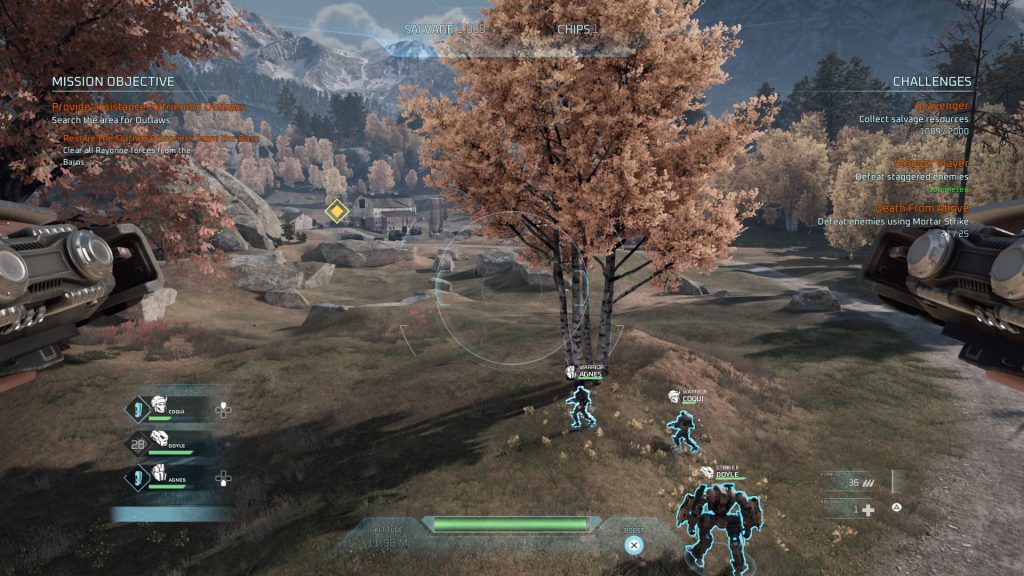 Lastly, let’s talk about the graphics and sound.

The game looks pretty good! While there is some pop in during the beginnings, I’ve experienced very little of it throughout the levels. As talked about earlier, Halo and Destiny are crisp games, and not only does Disintegration feel clean it looks it as well. The quality of destruction is also pretty incredible. Cover falls apart, but even siding fell from houses as wayward shots missed enemies and slammed against them. As for the sound, I will always love the sci-fi genre, and the way it sounds is exactly what I would think things would sound like if I was being chased by robot people. The soundtrack is also minimal, but fitting.

In the end, I like Disintegration. It’s a unique (to me) sci-fi story with tons of promise. While there are flaws, I’m left with wanting more rather than putting down my controller and turning off the console. I want Romer to be explored, more characters backstories revealed, and maybe a few crazy boss fights. The game plays so well that it deserves every mention next to Destiny and Halo that’s in this review. If V1 Interactive can just add that level of depth to the story next time, this can be a triple A title. And I do hope there’s a next time.

Take a chance on Disintegration. You may be surprised at what you find.

*Thanks to our partners Tom Green at Tara Bruno PR and V1 Interactive/Private Division for providing a review code. Disintegration is available now for PlayStation 4, Xbox One, and PC for $49.99.