Now first thing’s first, I’m going to need everyone to breath. That being said, there are reports coming out of Brisbane Supernova, a major comic convention held in Brisbane Australia, that Stan Lee just confirmed a Black Widow movie is happening! The story has popped up from a few sources right now, but the first to report it seems to be a Reddit user name HalfBloodMockingjay.

As the user says, the reveal occurred during a Q&A portion of Stan Lee’s Panel where one guest asked Lee if he’d like to see a Black Widow movie in the future. His assistant then replied “funny you should ask that” and then Stan Lee confirmed that it was indeed happening. The user then went on to provide a photo from the Panel to confirm that they were indeed at the panel. Again, this is the first and most detailed account of what happened, so it’s unclear whether the follow up reports reinforce that this indeed happened or were just copying this Reddit user and not crediting their source. 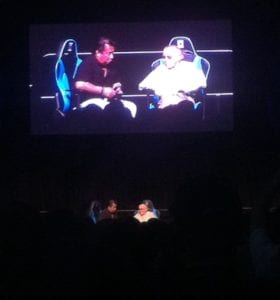 All things considered though, this wouldn’t be the first time Stan Lee has commented about Black Widow and her expanding role in the Marvel Cinematic Universe. Back in 2014 at Fan Expo Canda, Stan Lee was the first to confirm that a Black Panther movie was in the works and said that moving forward, Black Widow would begin to be featured more prominently in the MCU and that “chances are she will have her own movie because eventually all the superheroes are going to have their own movies.”

Stan Lee said Black Panther was happening and two months later there was a press event where it was officially revealed; and now here we are 3 years later with it about to hit theaters. Additionally, looking at Black Widow’s roles in Age of Ultron and Civil War, it looks like his other statement has slowly been coming true as well. So are we going to get a Black Widow movie in the next 3 years? Could this be one of the unnamed new Marvel Cinematic Universe films? Since this event took place barely 12 hours ago, there’s been no official word yet from Marvel Studios or Kevin Feige. If it is like last time, then it’ll probably be about 2 months before we get that confirmation. Though we have to remember that Lee is not Feige, but even so he is the next best bet. If Stan and fans will it, Marvel Studios will try to make it so!

So please stay tuned for more on this developing story.

Home » Fandom » Did Stan Lee Just Confirm That A ‘Black Widow’ Movie Is In The Works?