Well, it finally happened. Game of Thrones actually killed off a main character that we all collectively wanted to die. In the Season 7 finale “The Dragon and the Wolf” resident schemer Petyr “Littlefinger” Baelish (played by Aidan Gillen) met his end at the hands of the Stark children.

It had been a long time coming for the smooth talker who essentially started the literal battle for the Iron Throne after his betrayal of Ned Stark in Season 1 and ever since he has done nothing but make things worse for the Stark family. His attempt to turn Sansa and Arya against him backfired as the two had actually been playing him all along. Entertainment Weekly had the opportunity to speak with Gillen, who doesn’t often do interviews, about Littlefinger’s manipulative journey and his ultimate demise on the hit television show. When you star on a show like Game of Thrones where characters can die at the drop of a hat, you spend a lot of time hoping you never get “the call” from the showrunners. Well, for Aiden when The Double D’s rang him up he knew exactly what it meant.

The infamous call. It’s so obvious what it is. [Showrunners Dan Weiss and David Benioff] never ring you up — maybe once in six years. I learned about that call from [Roose Bolton actor Michael McElhatton] when he told me about his call and he talked about how it made him feel. And I thought if I get that call — or rather when as this has got to happen sooner or later to a character like Littlefinger — I wondered how it would make me feel. Because the show is such a part of your life for so many years, you start to think, ‘What will your life will be like outside of it?’ It’s a potent loss.

The question is when showrunners deliver news like this just how serious are they?

No joke. They just promised me a “river of blood.” Well, it wasn’t really a river of blood, but they promised me more than poor Michael got. It’s better to go out at the end of [the season] with a good arc then at the start of episode 2. Even if I’m only in a few episodes — like last season I probably had less than any season — once your character is established as part of the world people feel like you’re there all the time. So it’s not really an issue for me how many scenes I’m in as long as the scenes are good, and they’re well put together, and your contribution is good. Then people feel like you’re there al the time. I’m glad I had a good story to finish with.

Littlefinger’s plan was to get the Sansa to turn against Arya, which was absolutely a huge risk considering the tight familial bond the Stark’s have always had despite constantly being separated.

With carefully laid plans there’s always a bit of risk involved. He’s put himself in a situation that could backfire on him. I think he likes it. [His plans] are never fail safe. But he puts himself on the line like a good gambler. 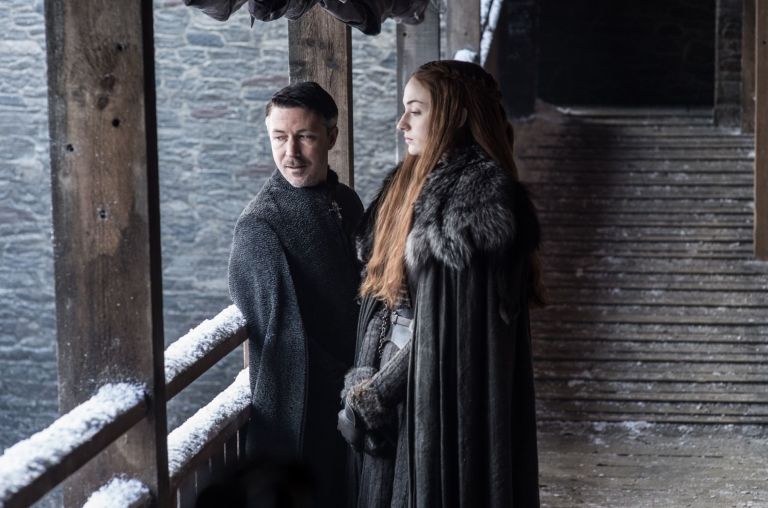 He learned the error of his ways pretty quickly though when Sansa made a last minute diversion and charged Littlefinger with the crimes he thought were intended for Arya: murder and treason. Soon after, Arya sliced open his throat with his own dagger.

Well, I did an interview with a publication [in 2015] and they asked me how I thought I would go. I said I thought Arya would deliver the blow. So it was as promised. And even within the scene, as soon as he walks in that room and Arya produces the dagger he knows the game is up. He at least suspected the game was up back in episode four when Bran told him, “Chaos is a ladder.” For Bran to come up with that is beyond coincidental. That’s when the ground started to shift beneath my feet. At that point, I knew the things I’ve done in private are not necessarily private.

It was a long and beautiful journey for Aidan being on a show like Game of Thrones, so leaving it was always going to be tough.

My last day on the set wasn’t that scene. [The execution] was the second scene I shot. I quite enjoyed doing things that way — shooting [Littlefinger’s death] and then shooting what comes before. When you know what’s coming you relax a little in the way you interact with the others. There’s something else that seeps into your performance — a kind of serenity. But yeah, I did find it quite emotional [shooting the finale scene]. And I don’t necessarily mean that I was sad, but it’s an emotional moment for the character so I felt what he was feeling. For the real last day at work Dan and David weren’t there but [co-executive producer] Bryan Cogman called people in and said a few words and my son was there with me. That was quite something.

As for if he took anything from set? Of course.

And I got my mockingbird pin. I had already let them know I wanted it, and I cleverly worked it so I got two. There’s one from my cloak and one from my tunic. So I got the large and the small size — one for me and one for my son. 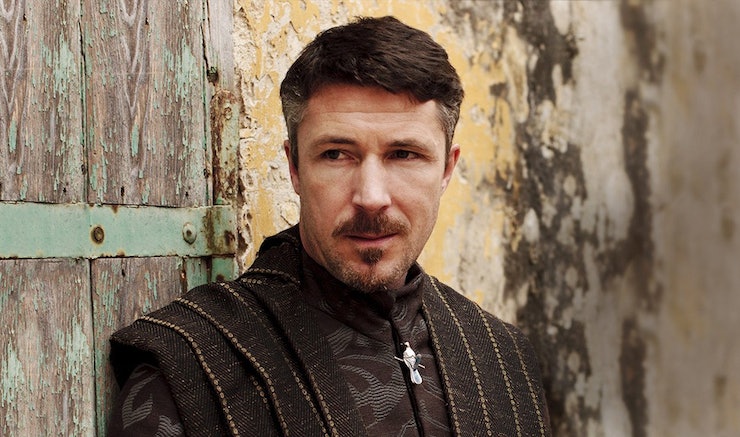 Head on over to EW to read the entire interview and for more Fan Fest Game of Thrones coverage, check out these articles!

Fans are Drawing Comparisons Between 2 ‘Game of Thrones’ Characters

‘Game of Thrones’: The Best Tweets from “The Dragon and the Wolf”