It is with great sadness that I bring this news to you all the Dexter fans tonight, but Michael C. Hall’s serial killer will not be returning for a ninth season.

Recently, a ‘promotional’ poster portraying the idea of a ninth season of the Showtime series, which ended in 2013, has been making the rounds all over Twitter, Instagram and Facebook. 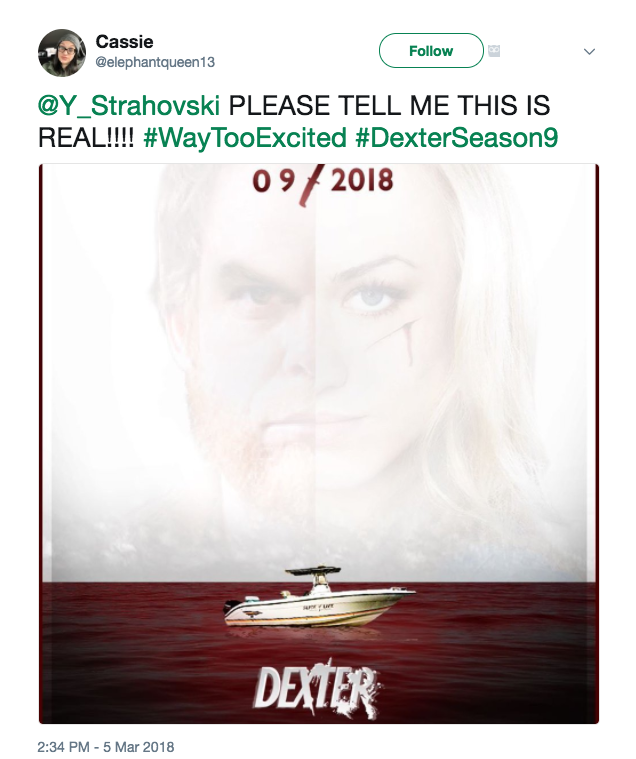 Sadly, this poster has proven to be fake as a representative for Showtime confirmed to IGN that there is ‘no truth to this rumor’ of a new season of Dexter airing this fall.

Perhaps this was the result of an overexcited fan, as we are nearing the series finale’s fifth anniversary. I mean, even though Dexter may not truly be coming back… perhaps the excitement that was expressed by fans of the series may have done something after all. After the show ended, the fan base was left devastated (or maybe that was just me) so maybe the fact that fans got so excited over a potential series revival could be a good thing for Dexter! Let’s hope Showtime was listening to our cries of hope!

Last year in an interview with EW, Michael C. Hall seemed open to the possibility of a potential reboot or revival of the series. Showtime also expressed a similar interest in a Dexter spinoff. Though none has been formally announced, it is something that will hopefully one day come to see the light.

Keep your fingers crossed, fellow Dexter fans… maybe one day we will get our wish!

Home » Uncategorized » ‘Dexter’ is not Returning for 9th Season