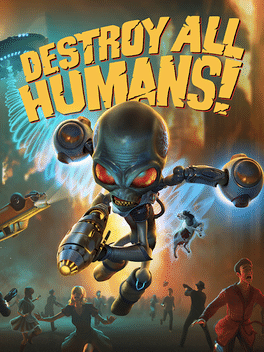 I don’t know why, but Destroy All Humans always looks interesting to me. Since I was a little kid, Crypto causing choas in an open world just seemed like fun. Well, someone else at THQ Nordic liked it too, and Destroy All Humans is back! As with several other IP’s (including SpongeBob which we recently reviewed), THQ Nordic has been bringing back our childhood bit by bit. But does Destroy All Humans invoke memories of the past, or crash on it’s orbital entry? Let’s put on our aluminum foil hats and investigate.

For those who don’t know, the game is about a little alien named Crypto. He’s the 137th clone of his line, with the others managing to get themselves in trouble. The Furon race is in a bit of a pickle with all of this cloning. Turns out the more you do it, the less viable DNA sequences are for the next clone. Given this is their only way to reproduce, the Furon’s are staring down the barrel of extinction. But as with much of science fiction, there is a reason for them to make a trip to Earth. Furons of the past made a stop at Earth after exterminating the Martians and got a bit frisky, so of course humans have a little bit of ancient Furon DNA which could save their race.

So this is where it gets fun, and hilarious.

It’s up to you to take a trip and with the guidance of Orthopox 13 (voiced incredibly by Richard Steven Horvitz) get said DNA. Of course, to do this you’re going to have to probe, blow up, zap, and much more to the humans. I mean, you need their brain stems, not many ways to get them in a nice way. The game also takes advantage of your need for DNA in an upgrade system that is simple in design, but upgraded in it’s own right to feature 66 upgrades instead of the original 18.

While I’m talking up Orthopox 13, Crypto 137 is written well too. Honestly, the whole game is. Does it get stupid? Yes. But that’s the point of it. The game doesn’t take itself seriously, neither should it. You’re an alien probing butt and taking brain stems. There’s nothing serious about it, and in embracing what it is makes it a great game. A narrative exists, but it doesn’t require the players full attention and is the better for it.

So, the graphics are amazing. Black Forest Games outdid themselves in crafting this world. The foliage is lush, environments have plenty of people, the buildings have that building sheen to them. This doesn’t look anything close to a game from 2005. While the people still have that cartoony look to them, that’s more a product of the type of game you’re playing than a limitation. This whole game is truly a parody of the sandbox genre, just like Saints Row which came after. Crypto himself is really detailed, down to the breathing holes on the back of his head being in motion. I often list the Crash Bandicoot N-Sane Trilogy as the standard for remakes, and this one is up there with it graphically. 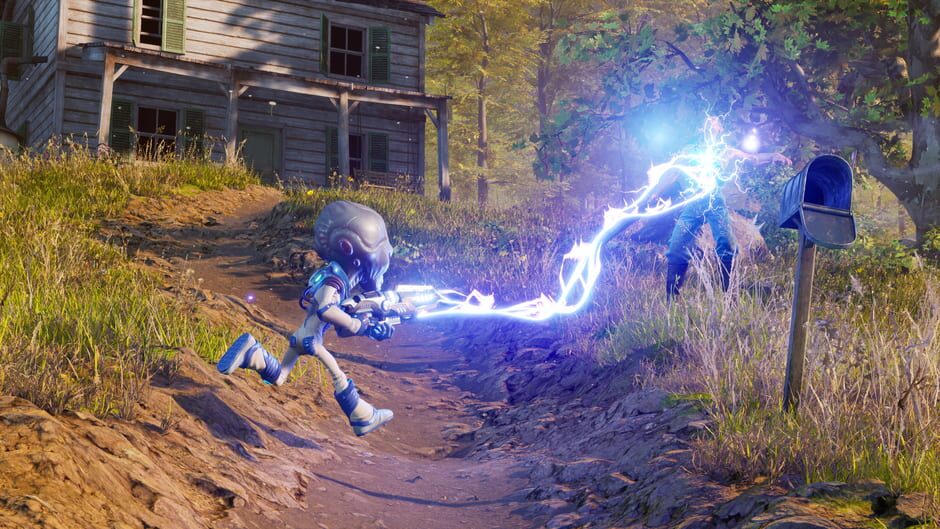 Of course, I don’t buy a game just to look at it.

I want to play it! And Destroy All Humans has plenty of game play for you. Each level is a sandbox, your playground to cause destruction. That doesn’t mean there isn’t a structure however, with over 20 missions to sink your teeth into. None of these missions are very large, but they are fun and honestly are a breath of fresh air in a world where 100+ hour games are the norm. Finishing a mission in 10-15 minutes is almost foreign to me at this point, so Destroy All Humans is a nice break from modern day game structure.

Most of your time you’ll be blowing stuff up, and that’s where the game excels. It’s really satisfying to run around causing mass hysteria. Destroy All Humans borrows plenty from Grand Theft Auto in that regard. The fun comes from the weapons you use to do it. While it doesn’t have the massive armory that Ratchet & Clank has, I like to compare the two, especially in game play.

You’ll melt some with your Disintegrator Ray, electrocute others with your “Zap-O-Matic”. And if you want to get nasty, pull out the Anal Probe. You might just want to clean it after each use. Then you can jump in your saucer and make things worse by using your Death Ray and other weaponry. While the aiming for the saucer feels a little off to me, everything else flows well in combat and is fun to play. Just like Grand Theft Auto, the more you destroy the more attention comes your way, as the army and eventually Majestic (secret service) arrive to fight you. None of them however are a match for your Furon might and armaments. 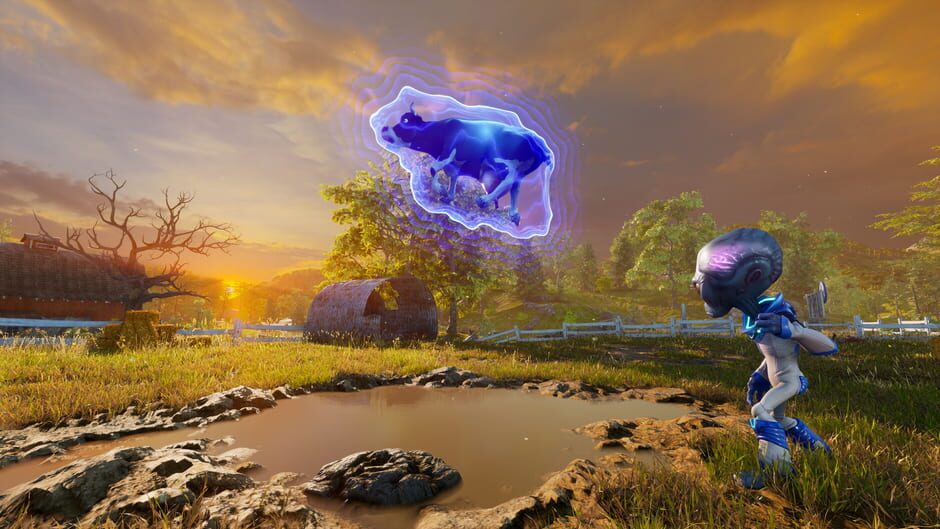 All of your other powers are here too, and function just as well as they did in the original game.

Holobob is here and improved, with being able to jump and pick up items. Your psychokinesis is still tons of fun, chucking people around with the push of a button. Some of my best time with the game was throwing cows at soldiers. A welcome addition to the game is Transmogrify, where you can now convert objects like barrels and such into random ammo drops instead of searching at the worst moments for it. And boy, reading minds is still hilarious. “If there’s anything more sensual than polyester, I haven’t found it…” 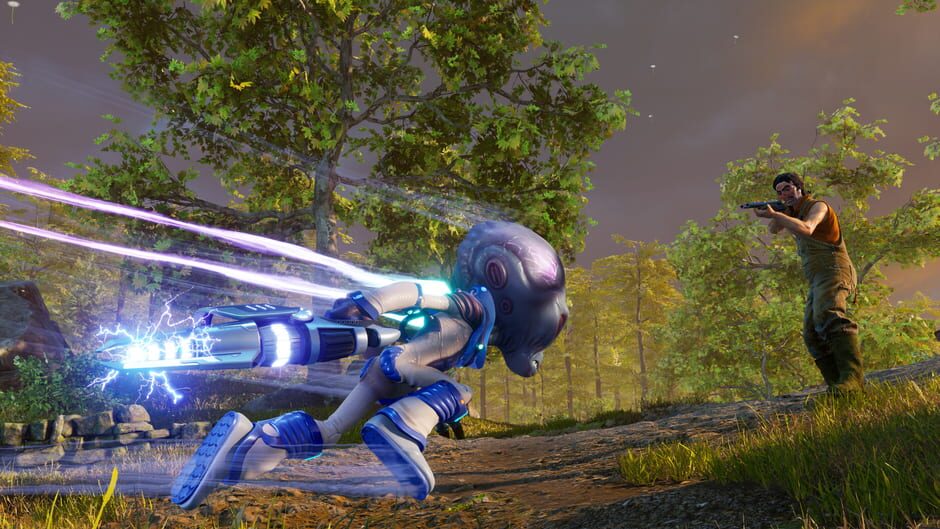 The best part about the game design is each of the hubs the levels are built in can be revisited.

While you have a specific objective and have a tougher time going off the books in the levels, the hubs allow you to do whatever you want in true sandbox fashion. You can just destroy everything you want, or engage in challenges to earn DNA to upgrade Crypto and the saucer. Because of this design, the replay-ability of the game is quite large. I ran around in Turnipseed Farm doing challenges and finding drone probes that are hidden throughout the levels for some time. A fun game play loop is needed for any game, and if you’re going to remake a game, taking advantage of having an existing one to improve on is even better. You can also re-visit story missions from the archives area, which is nice to complete the optional objectives you miss.

Destroy All Humans isn’t without its flaws, but it only has a few. As with SpongeBob, the loading times on this remake can be atrocious. Mainly the fact they are all over the place. Another part that is a bit annoying are the transitions between story missions. There are moments when you start a mission where it doesn’t even feel connected to the mission you just finished. I’m unsure if this this is intentional, but a more fluid story would have been nice. One way this could have been improved is through additional cut-scenes. I know Orthopox talks to you at the beginning of many missions, but I even had his first word or two cut off as the mission loaded in. Remakes must walk the line of overhaul and tweak, so I understand not everything can be fixed. But this is one thing I feel should have been. 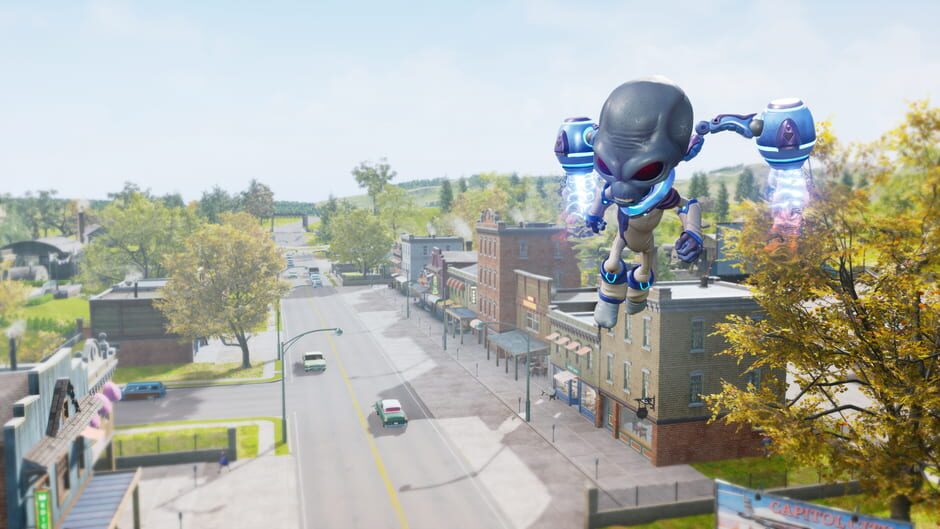 Destroy All Humans is just flipping fun. Crypto is hilarious, and your weapons are as well. The game play is solid, and even though it’s nothing truly new, it doesn’t matter. Going into this you want Grand Theft Alien, and you get Grand Theft Alien. The true things that matter is does the remake feel right, and I can say it does. Especially the graphics, which Black Forest Games went overboard in designing. If you want to just have stupid fun for 10-15+ hours, I suggest picking up the Destroy All Humans Remake. Great way to turn your brain off. Or lose it?… just kidding, go buy the darn game.

Thanks to our partners at THQ Nordic and Terminals/Evolve PR for providing a review code! You can pick up the Destroy All Humans remake July 28th, 2020! It’ll be available for PlayStation 4, Xbox One, and PC for the low low price of $39.99($29.99 on PC)!