Some DC fans believe that Henry Cavill may be a bit too old to wear the Man of Steel’s cape for another decade, with the DCEU’s 10-year film plan set to begin shortly. However, DC enthusiasts aren’t letting up, claiming that the actor could still perform Kal-El for many years to come.

When a Reddit user confessed that while Man of Steel was fantastic, it came out a decade ago, and the English star is already over 40, the disagreement began. The original poster added that before a new Superman film is released, The Witcher star will be in his late 40s. “Let’s say DC reboots or brings back Superman at their normal pace. Henry’s gonna be like 45 by the time that movie comes out, and then if he’s actually gonna be a believable part of this universe, we’re gonna need him around a decade. I’m sorry, I love Henry, but I have a hard time seeing DC even hanging onto an actor from 2013-2033.

I don’t know how anyone has this much faith at this point. Even if they do hang onto him, they’d be disregarding a huge part of Superman lore if they just have Superman age so quickly. I thought Cavill was too old on his debut, and tbh, the movie was so good it didn’t matter. I accepted it. This is asking a little much.” 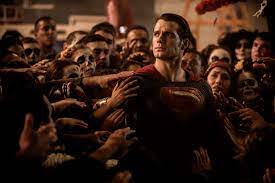 Regardless, fans have remained adamant that Cavill will continue to be a great superhero, and that 40 isn’t really that old. Others mentioned Robert Downey Jr., Hugh Jackman, Ryan Reynolds, and Mark Ruffalo, who have played superheroes into their 40s and beyond while still doing it well.

Many think that despite his age, Cavill should be able to keep playing Superman. The DCEU’s upcoming slate of movies includes Black Adam and Shazam: Fury of the Gods, which are set to arrive later this year, and Aquaman & the Lost Kingdom, The Flash, Blue Beetle, and Aquaman & The Seven Seas in 2019. However much time passes, however, the Kryptonian icon’s destiny has continued to dominate the discourse.