Welcome to another edition of my “Day Late and Dollar Short” Review series! If this is your first time checking one of these out, what I do is review movies, books, music etc. that may have slipped through the cracks here at Fan Fest or even came out before our lovely site even existed. This week, I’ve got a two-fer as I’m reviewing the 2 installments released so far of the “Hell Comes to Hollywood ” Horror anthology series.

I will start off by saying that I feel that horror anthologies can be a bit hit or miss as sometimes there seems to be more bad stories than good ones and pacing/structuring of stories can be a little off. I can assure you fellow readers, that is not the case with these two books. 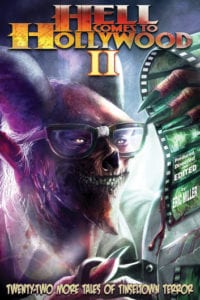 From open to close, there are very little filler stories contained in these books. The stories are varied in nature but set around the same locale: Hollywood.  Your cast of characters mainly revolve around screenwriters, actors, and directors who get pulled into some crazy, horrific and sometimes out there scenarios. Expertly curated by Eric Miller and written by Hollywood screenwriters, it really feels as if you’re reading a bunch of mini-movies. I could easily see most of these stories turn into YouTube fan films that could rack up millions of views and I’m honestly shocked they haven’t yet. I don’t want to spoil much of these books to encourage you to read them for yourself (Buy Volume 1 and 2 on Amazon now) but I do want to highlight my personal favorite of the two books, which is William Paquet’s entry from Volume 1, titled “Trash Day.” It’s about a screenwriter named Kirk who is staying in an old rundown hotel, and believe it or not that’s not even the scary part of the story. Kirk is hard at work on a script that could be his big breakthrough, but like all of us, he keeps getting distracted by things. His thing however, happens to be mysterious activity in the alley below. Unlike all of us if we were in that situation (at least we like to think so), he chooses not to mind his business and things don’t end too well for him. It’s one of the first books longest stories and honestly,  I would love to see this tale eventually even further fleshed out on the big or small screen. I heard TBS is looking for a replacement for their failed reboot of Tales from the Crypt…maybe might I suggest them take a look at Hell Comes to Hollywood? 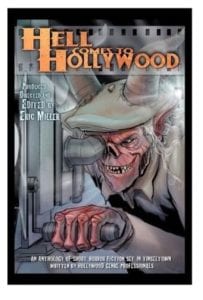 These two volumes impressed me so much that on one of my next “Day Late and Dollar Short”s, I’ll be giving a shot at one of Eric Miller’s more recent horror anthologies titled 18 Wheels of Horror: A Trailer Full of Trucking Terrors, which also has a sequel coming out from Big Time Books. Happy Days Indeed! Without a doubt though, if you are a fan of horror anthologies that remind you of the Twilight Zone or Tales from the Crypt (if they were always set in Hollywood), you can’t do much better than these books.