Welcome back to another installment of my Day Late and Dollar Short review series! In this series, I review movies,shows,books or music that may have slipped under the Fan Fest News radar, or may even have been released before we existed! Today, we’re taking a trip back only one year ago to the fourth film in the Hatchet series ,Victor Crowley(released on DVD/VOD this past February). 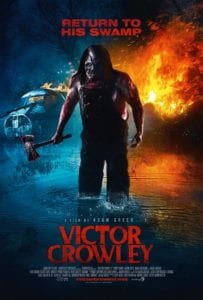 Now before we get into the film, I have to inform you that full disclosure I host a podcast with actor Dave Sheridan, who has a main role in this film. That however has no effect on my opinion of the film though because a fun film is a fun film and THIS is a pretty fun film.

For those unaware this is the fourth film in the Hatchet franchise, which started over a decade ago and has developed into a huge fanbase full of fans that  just happen to love good “old school” balls-to-the-wall gorefest type horror films(new genre I just created). While I have enjoyed the previous Hatchet films I will say this film definitely stands out in more ways than one.

For example:You could not dive into the previous sequels without seeing the prior films because you would be utterly lost. The first 3 films are a complete story. Each sequel picks up the exact moment the prior film ended so you were lost if you hadn’t seen the previous one. Victor Crowley however, manages to do something many movie sequels fail to do: Carry on a story from prior sequels while also acting as a starting point for newer viewers.

In the first couple minutes of Crowley, you learn all the backstory from the previous films that you need to know.  From that point we meet all the players of the film, who may become Crowley’s next victims in the Honey Island Swamps.  From the beginning all the way to the end credits,director Adam Green fuses horror and comedy so seamlessly that I feel it’s a detriment to the film to label it just as horror. Dave Sheridan, most notably known as Doofy from Scary Movie and Laura Ortiz(from Adam’s sitcom Holliston and 2006’s The Hills Have Eyes remake) are without a doubt two of the scene stealers of the film and have some of the funniest lines to deliver. I honestly believe that Dave’s role in this film should be considered one of his best roles yet, as any time he shows up on screen, you can’t help but laugh at his actions. Same with Laura, whose deadpan delivery and smartass comebacks had me laughing out loud multiple times.

Parry Shen also deserves a shout out as this movie is his and he absolutely owns it. He’s been in all 4 films but this is the first time he’s returning as a prior character(if you’ve seen the other films,you know what I’m talking about). His character Andrew is the main character of this film, and with him being in the lead he proves himself more than up to the challenge. By the end of this film, you’re rooting for Andrew even if it seems like Andrew may not be rooting for himself. I want to say more about this character but to avoid spoilers I will just say that he goes from pretending to be something he’s not to just maybe…actually being that thing. Vague-writing for the win!

Moving on,this wouldn’t be a Hatchet film without insane amounts of blood spraying everywhere and in that regard,Victor Crowley does not disappoint either. Curb stomps, drownings, dismemberment and a particular nasty insertion of a cell phone is just the tip of the iceberg of gore in this film. My jaw dropped repeatedly over the 80 minute run time at the fantastically performed practical effects  that had me questioning “how did they pull one off?” death after death.

With all that being said, would I recommend this film to new viewers or fans of the previous films? Absolutely. I hate to say I had very little hope of this film being any good beforehand, but upon watching not only did it surpass my expectations, it took them and like Victor Crowley himself, beat me with them until all that was left was a puddle on the ground. What did you think of the film? Let me know on Twitter at @cjcnov88