Welcome to another installment of my Days Late and Dollar Short Series, where I review movies, games, tv shows or music that may have slipped under the Fan Fest radar or even have been released before we existed. Today is the movie follow up to the popular HBO series Entourage.

For those unaware, Entourage started as a TV show loosely based on actor Mark Wahlberg’s life/career but told through the life of character Vincent Chase (Adrian Grenier) and his close circle of friends: Turtle(Jerry Ferrara),Eric Murphy (Kevin Connolly), brother Johnny Chase (Kevin Dillon) and Agent Ari Gold (Jeremy Piven). The show ran for 8 seasons and is in my opinion, one of the greatest shows of all time. Besides the final season, where nothing really happened until halfway through the season when the writers apparently remembered the show was ending.  But we’re not here to gripe about Season 8 (that’s a whole article in itself). Full disclosure, it had been awhile since I watched the show so I binged the series before hand so I could remember all that happened leading up to the film. 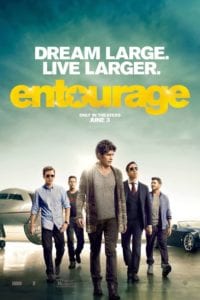 While you can watch Entourage the movie without having seen the show(they catch up and explain to you the characters in the beginning), the best way to watch it is of course, after finishing the series. There are so many references to events from the show (along with cameos from characters featured in the show), that a normal viewer would not get, but references and Easter Eggs does not a movie make, ultimately the question is if the story is worth it?

Well.-yes and no. The film thankfully, like Vince’s publicist Shauna, spins the final episode of the series and undoes most of the damage it created(rushed marriages for one). Past that bit of brilliance, the movie format seems to hurt more than help as there are some interesting subplots that movie wise only seem to stretch the run time with no real payoff (for example, Johnny’s “expose” by TMZ). If it would have been another season instead of a film, they could have spent more time on the fallout from the event,  as opposed to the initial reaction then never being mentioned again. The main plot never really seems all that important either, but in the end, we pretty much get what we want: a happy ending for all the characters we love, that also makes sense.

All in all, it’s still a watchable movie and a fitting end to the Entourage Universe due to the stellar performances from all involved and the fantastic celebrity cameos. In the end, isn’t that what we all want?