Share
Pin
Tweet
Earlier this week, it was revealed that 70s heartthrob, David Cassidy, is battling dementia. The actor/singer found fame on the hit series “The Partridge Family” where he played Keith Partridge. Former “Family” cast mate, Danny Bonaduce (who played younger brother, Danny, on the series) tweeted a shout out to his former big brother.
“David Cassidy once had a bigger fan club than Elvis & The Beatles,” Bonaduce wrote. “If you’re a fan, now is a great time to send him your love & best wishes.” 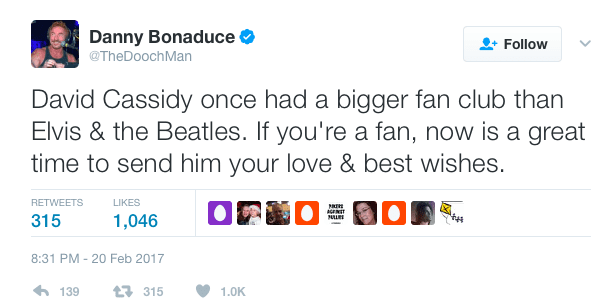 The tweet, posted Monday night by the 57 year-old actor, was the first public mention of Cassidy’s condition by a Partridge” costar.
Cassidy’s family has a history of dementia, and the actor spoke to People about his current situation. “I was in denial, but a part of me always knew this was coming.”
Though his health has caused him to stop touring, Cassidy is not dwelling on his affliction. “I want to focus on what I am, who I am and how I’ve been without any distractions,” he told People. “I want to love. I want to enjoy life.”
Taylor Leddin
Share
Pin
Tweet